The billennial generation: how bilingual millennials are changing Spanish-language TV 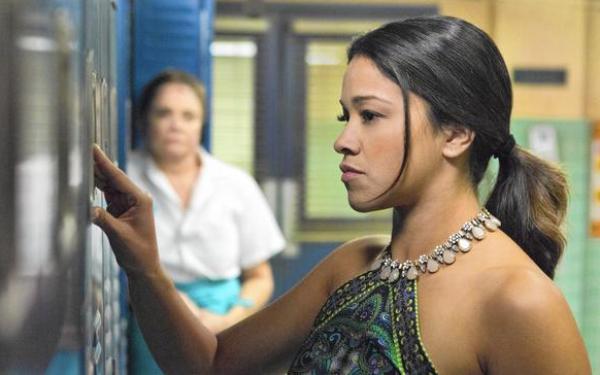 Gina Rodriguez in "Jane the Virgin"
(Credit: The CW)

"Jane the Virgin's" Gina Rodriguez may star in a TV show based on a Venezuelan telenovela — and her character may devour Spanish soaps with her abuela — but when she was growing up in Chicago, the programs she plopped herself in front of the tube to catch were apple pie sitcoms such as "Growing Pains" and "Family Matters."

"I lived for those shows," says the 30-year-old actress, who won a Golden Globe for her leading role in the popular CW series. "I didn't grow up on telenovelas."

That presents a challenge for Spanish-language networks in the United States. Rodriguez, of Puerto Rican descent, is part of a generation of bilingual millennials who are gravitating away from the torrid love stories and brassy variety shows that have been popular for decades on Spanish-language TV.

Univision calls this generation "billennials." And they increasingly consume their media in English.

It's a shift that Spanish-language networks have seen coming for some time. Billennials now outpace immigrants, long the core market of Spanish-language media, as the main source of growth for the Latino population.

Univision may be sitting pretty as the fifth-largest U.S. broadcaster with 2.8 million nightly viewers, and Telemundo has a nightly average of 1.4 million viewers, but the two networks recognize that if they want to maintain their hold on the coveted Latino market they need to actively court billennials.

"U.S. Hispanic millennials really have the best of both worlds right now," says Telemundo President Luis Silberwasser. "They have their choice of the best programming, regardless of language. What that requires for us in finding success is innovation — the kind of innovation that the Spanish-language marketplace has never seen before. It's been a market that for decades has programmed the same way that it always has been, in a very traditional way."

Bit by bit, however, time-honored telenovelas and kitschy game shows are rubbing elbows with programs characteristic of English-language hits. That means more reality series, including an upcoming Spanish-language version of "Big Brother" for Telemundo, and music shows such as Univision's "La Banda" from Simon Cowell, featuring Ricky Martin, Alejandro Sanz and Laura Pausini as judges.

Telemundo's "La Voz Kids" wrapped its third season at the top of Spanish-language ratings. Meanwhile, established, older-skewing shows such as Univision's 53-year-old "Sabado Gigante" are being shown the door.

Even telenovelas and their classic rags-to-riches storylines are changing. So-called narco-novelas, centered around the drug underworld, have emerged in recent years. And on the heels of Fox finding gold with the musical soap "Empire," Telemundo will roll out two musical dramas based on the lives of popular Latin America singers Celia Cruz and Juan Gabriel.

Taking a cue from the success of prestige dramas such as "Breaking Bad," NBCUniversal-owned Telemundo has embraced darker subject matters and morally challenged characters with its Super Series programs. Not only are the storylines different, Super Series are scheduled like English-language programs. Instead of a more traditional single one-and-done season of 120 episodes aired daily over several months, Super Series telenovelas run over multiple seasons that are much shorter than a classic telenovela season.

The changes are having an effect. Telemundo's "El Señor de los Cielos" ("Lord of the Skies") launched its third season in April with 2.68 million total viewers and 1.76 million adults ages 18 to 49, making it the highest-rated premiere in the network's history.

Latinos represent 21% of the overall millennial population in the U.S. Many in this group are billennials. A 2012 Pew Research study indicated that English is the predominant language in 34% of Latino households, up from 9% in 2011, while Spanish is on the decline. And U.S. Census Bureau projections show that by 2020, one-third of Latinos ages 5 and older will speak only English at home, up from 25% today.

According to a 2011 Nielsen report, bilingual homes where both Spanish and English are spoken watch about 50% Spanish-language television, while English-dominant Latino households watch a mere 3% of Spanish-language TV.

Univision and Telemundo face an added hurdle as English-language networks profit from programs that play off the telenovela format. This year "Jane the Virgin" charmed critics. And NBC next year will debut Eva Longoria's comedy "Hot & Bothered," which pokes fun at Latino soaps and the stars who appear in them.

Attracting Latino viewers is good business for both English- and Spanish-language programmers. Nielsen Co. found that Latinos in the U.S. have more than $1 trillion in purchasing power and are projected to contribute 100% of the population growth between the ages of 18 to 49.

"Young Latinos are one of the most coveted segments for advertisers," says Jorge Mercado, consumer connections director of multicultural ad agency Alma. "As long as networks like Univision and Telemundo produce content that is relevant and compelling, they'll keep their hand in the game. They've come around to realizing they can't just program to the grandparents anymore."

Programming to their parents isn't the solution either. Frances Negrón-Muntane, director of the Center for Study of Ethnicity and Race at Columbia University, says that though Generation X and Generation Y have bilingual and bicultural backgrounds in common, technology's influence in viewing behaviors has radically changed the urgency for Spanish-language networks to adapt.

"It's a matter of survival," she says. "When a group becomes more assimilated into the fabric of society, the functions of outlets — in this case, Spanish-language networks — change because the needs and wants are different. It seems like they're now at a crossroads. They are used to achieving tremendous penetration. But there is a series of shifts and transformations that have happened, and they now realize they need to account for that if they want to continue to thrive."

According to a 2015 Ypulse report, about 40% of Latinos under age 32 watch content on their smartphones five or more days a week. That fact is not lost on network brass.

"We cater all our content now to not only linear, but digital," says Alberto Ciurana, president of programming and content for Univision. "It's clear that this demographic is growing and their viewing habits are all over the place. It's not something that can be ignored anymore."

For years Telemundo and Univision have experimented with Webnovelas, online offshoots of telenovelas that run six to nine minutes. Univision's upcoming telenovela "Antes Muerta que Lichita" ("I'd Rather Be Dead Than Ordinary") will have a Webnovela extension. And with Univision's Novelas Xpress, viewers can stream abridged versions of telenovelas, cut down to about 15 hours.

Some viewers engage in bilingual multiple-screen viewing on their own. "It's interesting," says Telemundo's Silberwasser. "There are some people watching our Super Series or 'La Voz Kids' who are tweeting in English and watching it in Spanish."

Other initiatives are an interactive comic book and R.A.V.E., which gives viewers a virtual experience of a program via a smartphone.

The creation and investment in sister networks or brands aim to bridge the gap between American culture and the roots of acculturated youthful viewers — to unsteady results.

Telemundo had a head start with the launch of bilingual network Mun2 in 2001. But last year, after distribution issues and a lack of traction with the bilingual audience, the channel was rebranded NBCUniverso to reshift its focus to the Spanish-language market, with an emphasis in sports.

Univision, meanwhile, owns sister network UniMás, which targets males ages 18 to 35, with soccer matches and shows such as the suspense drama "Fugitivos." It has also invested in El Rey, an English-language cable TV network created by director Robert Rodriguez and Comcast. And it has partnered with ABC News to launch Fusion, a TV and digital news hybrid that originally targeted Latino millennials but has since expanded its scope to young viewers of all ethnicities.

El Rey and Fusion, both newer ventures for Univision, lost a total of $85.2 million last year, according to the company's financial statement.

Univision, the dominant Spanish-language network, still does well, however, with key demographic groups — adults ages 18 to 49 and adults ages 18 to 34 — outpacing English-language broadcasters, which have also faced declines with these audiences. It's one element that has helped put the company in strong standing as it positions itself to go public. But the network has had to contend with some erosion.

One question looming, as the quest to attract billennials intensifies, is whether Univision or Telemundo will eventually lose its Spanish-only identity and mix in English-language programs.

"This debate has gone on for a long time," Telemundo's Silberwasser says. "Who knows? My view right now is we do what we do best."

And right now, he says, "we are a Spanish language network."