Legal fight between USC, UCSD could have implications for Alzheimer’s research 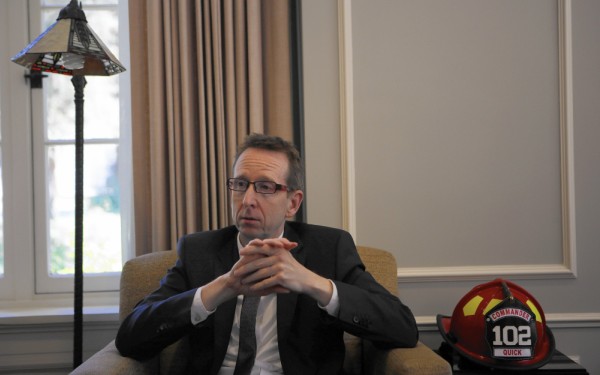 USC Provost Michael Quick, who is a neuroscientist, said he understood why some in San Diego are suspicious of USC, but he denied any dark motives.
(Credit: latimes.com)

The case could have wider implications for science and the pursuit of treatments for an illness that strikes millions.

UC San Diego’s lawsuit challenging last month’s move of its former faculty member and Alzheimer’s researcher Paul Aisen and other employees to USC is seen as a startling pushback against USC’s ambition to bolster its reputation in medicine and the sciences, in part by expanding south and offering lucrative packages to public university faculty.

Some experts worry that a lengthy court battle could impede the search for treatments that could halt or reverse Alzheimer’s, a disorder that afflicts about 5.3 million Americans, a number expected to grow significantly as baby boomers age.

In the lawsuit filed earlier this month, UCSD alleges that USC, Aisen and eight colleagues conspired to take research data involving more than 1,000 patients, plus other assets including an estimated $100 million in federal and private funding, to a new USC Alzheimer’s study center in the San Diego area. UC San Diego is seeking unspecified financial damages as well as full access to the data bank. Aisen and USC deny any wrongdoing and contend that UC San Diego is trying to inhibit the freedom to change jobs and is also threatening the data’s security.

The Alzheimer’s Disease Cooperative Study, which Aisen has headed since 2007, is running a clinical trial to determine whether a drug developed by Eli Lilly and Co. can block a protein buildup in the brain and slow or prevent Alzheimer’s in people who do not yet have memory problems.

If the legal dispute between the two universities is not settled quickly, it has the potential “to slow progress down and maybe even interrupt” the clinical trial and related studies, said Maria Carrillo, chief science officer for the Alzheimer’s Association.

The international nonprofit, which pushes for improved care for Alzheimer’s patients and research into possible cures, recently awarded a four-year, $8-million grant for a Harvard-based study linked to the work at UC San Diego. The association wants “a speedy resolution” of the lawsuit to keep the research on track, Carrillo said.

Richard Seligman, the associate vice president for research administration at California Institute of Technology who has more than four decades of experience dealing with grants, said he had never heard of such a lawsuit, even though competition for grants and noted faculty has gotten more fierce.

It is common for researchers to jump from school to school and to receive permission from their original campus and funding agencies to take grants with them, he said. Universities are never happy to lose grants, portions of which help pay for overhead expenses such as utilities and administrative support. But in most instances, “universities are extremely collegial and collaborative and hardly ever get into disputes” about those moves, he said.

In some cases, the original universities retain part of large grants for faculty who remain with them, and allow the departing researcher to take the rest. Seligman and other experts said such arrangements recognize that science transcends campus boundaries.

But in endowment funds, which can bolster faculty pay, UC San Diego’s $752 million is dwarfed by USC’s $4.5 billion, and USC’s fundraising machine far outstrips that of the La Jolla-based campus.

Private universities like USC are recruiting faculty from public institutions that have suffered budget problems since the recession, according to Terry W. Hartle, the American Council on Education’s senior vice president for government and public affairs.

“It is a matter of great concern to public research university presidents that private universities can pay far higher salaries to distinguished faculty and scientists and can lure them away,” he said.

The Alzheimer’s research fits into USC’s plans to expand and improve its biomedical labs, school officials said. USC’s desires apparently dovetailed with what Aisen described as his own long-festering unhappiness at UC.

USC is working on long-range plans to bolster biotech research and industry in Los Angeles, which is seen as lagging far behind San Diego. Meanwhile, USC Provost Michael Quick said in an interview: “We have to be at places where the conversations (in biomedicine) are the best. And San Diego is one of those places.”

In trying to move that work and about 30 former UCSD staffers to a new Alzheimer’s center in San Diego’s Sorrento Valley, Aisen and USC are reviving concerns about the Los Angeles-based university’s plans to expand to the south.

Last year, negotiations for USC to acquire or affiliate with the biomedical powerhouse Scripps Research Institute in La Jolla collapsed after some faculty members there said they feared a loss of independence.

UC San Diego Chancellor Pradeep Khosla said in an interview that the lawsuit did not seek to block USC or any other university “from coming here, nor am I thinking about it.”

However, he said: “I do have to worry about protecting the infrastructure that the UC system and the state have invested in this campus, and to make sure that our faculty is taken care of, that they’re succeeding, that we’re becoming better.”

Khosla said he was not trying to stop other schools from wooing faculty. “It’s a free country. We do it, too. We do it on a strategic basis.”

But the chancellor added that “there is a subtle difference between raiding and hiring. If we have a need and find a match, we’ll try to make a hire. But I’m not going to go to another campus and decimate them in an area like history or ethnic studies. That is raiding.”

Asked about USC’s hiring of Aisen and the others, he said: “Only time will tell whether what USC has been doing is a raid. Some third party will determine that.”

USC Provost Quick, who is a neuroscientist, said he understood why some in San Diego are suspicious of USC, but he denied any dark motives.

“I think it comes from people not knowing each other. I don’t want San Diego to feel like the University of Southern California is being some threat. I think it can absolutely be a win across the board.”

He said USC wants to be part of the San Diego community and partner with the UC campus on projects; Khosla said such cooperation remained possible.

Quick conceded that such collaboration is “tough when there’s lawsuits ...I get that. But I really hope that we can come together, figure out how to keep the science moving forward.”

Aisen said bureaucratic and financial problems at UC San Diego made it difficult to maintain and expand his research and that USC is more flexible, allowing him to “optimize” his work.

“I believe the science is more important than institutional loyalty,” he said.

His complaint echoed that of two neuroscientists, Arthur Toga and Paul Thompson, who left the University of California, Los Angeles two years ago for new facilities, higher pay and what they described as a more nimble environment at USC.

But even if some conciliatory moves are made, clearly UC San Diego feels wounded. Aisen’s actions are “akin to an airline pilot hijacking a plane, then justifying the act by saying he’s a better aviator than the airline’s owners, other pilots, passengers and crew,” UC San Diego medical school dean David A. Brenner and Gary S. Firestein, another top administrator there, wrote Thursday in The San Diego Union-Tribune.

The moves by Aisen and USC “are breaches of academic, medical and legal standards of conduct,” they wrote.

Left in an uncomfortable middle ground are the National Institutes of Health and its subsidiary National Institute on Aging, which provides about $11 million a year to the UC Alzheimer’s center. While confirming that UC San Diego still holds that grant, agency officials said that in such cases, they must determine whether the funding ultimately stays put or moves with the principal investigator — in this case, Aisen.

NIH officials, in a statement, said they are “closely monitoring” the San Diego situation “with a focus on the safety of study participants and the integrity and utility of data.”

Campus News
What’s the risk of COVID-19 for a healthy young person?
677 views