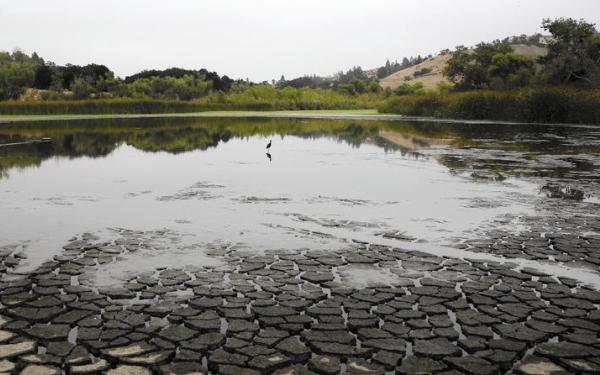 With the Chatsworth Reservoir on life support from the drought, a vigorous debate is underway over whether the so-called ecology pond at Los Angeles' only nature preserve should be allowed to survive.

The pond, in the rocky foothills of the west San Fernando Valley, had teemed with wildlife for seven decades. Today, it is a shallow sump surrounded by mud and littered with the skeletons of mostly invasive aquatic species that died as the water receded.

The L.A. Department of Water and Power, which owns the 1,325-acre preserve, stopped filling it with potable water because of mandatory state reductions requiring the city to curb overall water use or pay financial penalties.

Pressured by environmentalists and homeowners groups, the DWP started replenishing the pond June 25 with recycled water hauled from construction sites around the city. So far, more than 75,000 gallons have been delivered, barely enough to keep up with evaporation.

The utility and Los Angeles City Councilman Mitchell Englander, whose district includes the preserve, are trying to develop long-term sustainable solutions for the pond area, which served as a debris basin to hold urban runoff until taken out of service in 1960.

"The real problem at the preserve is that the debris basin has filled with silt over the past several decades, leaving behind a very shallow pond," said Marty Adams, deputy senior assistant general manager at the DWP. "We ultimately have to clean it up.

"Our immediate goal, however, is to not let anything bad happen in the preserve's habitat, while not putting any more drinking water in there."

As those efforts continue, environmental activists and evolutionary biologists are debating the pond's future.

Environmentalists contend that maintaining a deep, permanent body of water in the preserve is the only way to ensure the long-term survival of the wetlands on a key migration route for numerous bird species.

But some scientists regard the pond as nothing more than an unnatural ecosystem that has spawned invasive species, which in turn killed off native plants and animals. Those scientists say the reservoir should be allowed to dry up so that the invasive species die off and native creatures can return and thrive.

"It's a bogus ecosystem with invasives that are destructive to species that evolved there over thousands of years without a permanent pond," said Sam Sweet, a herpetologist at UC Santa Barbara. If it goes dry, invasive bullfrogs, red-eared slider turtles, mosquito fish and crayfish will disappear.

By contrast, Sweet said, "native species don't like drought, but they can survive it."

Greg Pauly, curator of herpetology at the Natural History Museum of Los Angeles County, said that in Southern California's Mediterranean-like habitat, the area had little standing water until the reservoir was built.

"Native species out there such as western toads adapted over millions of years to prolonged dry periods," Pauly said. "As horrible as it may sound to environmentalists passionate about maintaining a permanent pond in the reservoir, we ought to let that pond go dry.

"I think nonnatives are OK, or at least mostly tolerable," he added, "in some habitats, for instance, completely urbanized ponds in isolated city parks, but certainly not Chatsworth Reservoir."

That kind of talk rankles Mark Osokow, a retired DWP biologist and spokesman for the San Fernando Valley Audubon Society. The problem at Chatsworth Reservoir is that through mismanagement, the DWP has failed to provide enough water to keep the pond healthy, Osokow said.

As for the nonnative creatures, he said: "So what? The wetlands attract all sorts of native birds that eat nonnative red-eared slider turtles and crayfish. So we've got an ecological system that is actually sort of in balance.

"We've got to do the best we can with what we've got," Osokow said. In this case, that's "a beautiful little ecosystem with migrating birds and turtles that some people don't like."

Volunteers from the Southwestern Herpetologists Society made a distressing discovery about the pond two weeks ago after they built a wobbly plywood bridge that was long enough to span surrounding mud flats, which are the consistency of peanut butter.

"We normally don't get involved in turtle rescues," said Sharon Shingai, a spokeswoman for the society. But in this case, they hoped to rescue at least one or two western pond turtles, California's only species of freshwater turtle.

Unfortunately, "there weren't any out there," Shingai said.

Instead, the group pulled out 41 nonnative red-eared and yellow-bellied slider turtles in two days. They are among the world's most destructive invasive species.

"We're still trying to find homes for them," Shingai said. "We want to make sure they go to responsible parties who know how to take care of them and will not re-release them into the wilds."

The DWP is struggling to balance inherently conflicting uses for the preserve. The utility's primary mission is to maintain a complex water system for millions of people citywide, not to protect invasive turtles.

"The problem at the preserve is that the community wants to keep water in a pond that is actually a debris basin," Adams said. "We ultimately have to clean that basin out, and look for new ways to put water — perhaps storm flows and high groundwater — back into it."

Historically, storms occasionally filled scattered sites with water, but only long enough for native species such as the western spadefoot toad to lay eggs, then bury themselves in the silt and hibernate until the next heavy rains.

The last spadefoot toad sighting in the greater Los Angeles area was in 2011 near the preserve pond. Spadefoot toads, which get their name from a distinctive hard, black projection on the underside of each hind foot, had not been seen in the region for more than a decade.

Today, that toad lives alone in a terrarium at the Los Angeles County Museum of Natural History.