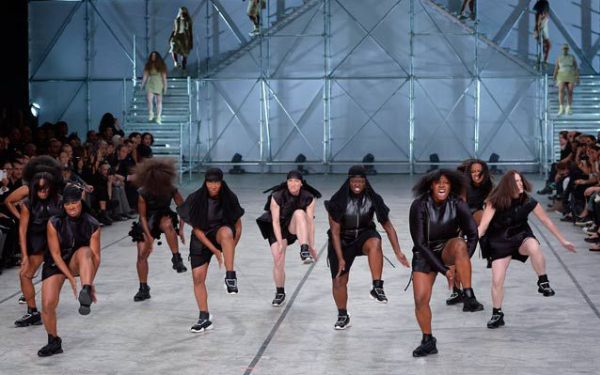 Rick Owens’ Spring-Summer 2014: An expression of step dancing and liberation of movement

Rick Owens, the Paris-based designer who started his goth luxe brand here in 1994, is coming full circle, soon to open his first L.A. store. It's on a seedy stretch of La Brea Avenue, just down the street from the Plaza, a drag bar where he spent many a late night, including one when he met "a shriveled little man" on the dance floor who turned out to be his hero Iggy Pop.

Renovations are in progress on the 5,200-square-foot, concrete-floored space, which will have high ceilings supported by massive angular beams, a water tank releasing slow-motion bubbles and a wall emitting fog every five minutes. It's enough drama and scale to match Owens' booming business.

"My goal was to create something Cecil B. DeMille-worthy," says Owens, 52, who grew up in Porterville, Calif., just north of Bakersfield, studied art and design in L.A. and got his start in the fashion district here. "Epic, biblical movies were the first idea of exoticism I could cling to when I was growing up and have influenced everything I do — doomed heroic purity in black and gray-draped robes in huge, dusty, marble temples. This store is as close as I might ever get to re-creating that."

So what exactly is it about DeMille's orgiastic excess that appeals to Owens, a self-proclaimed ascetic with gym-toned muscles and long hair, whose palette ranges from "darkdust" gray to black?

"The quality," says the designer. "If you look at 'Cleopatra' now, and I still do … you can see the fringe that's just thrown across the throne is gold bullion and the furs are real. Everything is so thought out, and then it's on a huge scale.... They pull the camera back and the set is huge with thousands of extras, everyone in the right costumes and feathers floating all over the place. It's delirious.... Even to this day, almost every morning I'm watching a Cecil B. DeMille movie with the sound off and listening to opera while I'm getting dressed," says Owens, who moved his business to Paris in 2003 to be closer to his Italian manufacturers. He has homes in the 7th arrondissement, as well as in Venice and Concordia, Italy.

"When I think Hollywood, I think of grungy Hollywood Boulevard and Gloria Swanson in 'Sunset Boulevard' and Cecil B. DeMille. There is something grand but also dilapidated and crumbling. So that's what I'm relating to, and I think I'm in touch with that every single day of my life because that was and still is a profound pillar of my aesthetic," he says in a telephone interview.

Designed by longtime architectural collaborator Anna Tumaini, the store at 819 N. La Brea Ave. — which is to open soon ; the precise date had not been determined by press time — will feature the entire Owens universe. The stock includes women's knitwear and T-shirts in his signature drapey silhouettes; sports-infused menswear, shoes, accessories, the simple benches and tables he designs and jewelry designed by his muse and wife, Michele Lamy.

Over the years, Owens has built his image on a blend of glamour and grit. His now-classic feminine take on the biker jacket, with off-center zipper and ribbed paneling creating a snug fit, and some pretty off-the-hook sneakers (the Geobasket hightops, Springblade Adidas and Sphinx sneaker boots) have given him a position of power in both the high-fashion realm and on the street, with Kanye West and ASAP Rocky leading the fan club and immortalizing him in rap. Athletes flock to Owens too; his menswear is cut up to a size 56, with elongated sleeves and drop-crotch drawstring shorts. Regular prices range from $358 for a T-shirt to $4,391 for a biker jacket and go higher for special pieces.

What started as a niche brand selling at the now defunct L.A. boutique Charles Gallay has gone global, with nine Rick Owens stores worldwide, retail accounts around the world and earnings of more than $120 million in 2014. Throughout it all, Owens has remained financially independent.

As his public persona has grown, his Paris runway shows have become increasingly theatrical, sometimes by design, sometimes not, featuring a performance by step dancers from American college sororities one season, male nudity that ignited worldwide controversy another and, just weeks ago, a model who went rogue with a protest sign addressing German Chancellor Angela Merkel.

Still, Owens insists he's trying to take a break from theatrics — at least on the runway; in real life, he's mulling the possibility of staging an opera, though "nothing is confirmed yet."

"When I started out, my main motivation was to make quiet, elegant clothes that had a lot of restraint and reserve. Because what I saw in the world was a lot of busy-ness. I wanted to do something very serene, gray, modest and kind. Then, all of a sudden, I was doing Busby Berkeley spectaculars.... I didn't want to get stuck in that role.... But I do think there is a way to present a gentle overall picture with moments of flamboyance."

That's what Owens did with his fall 2015 women's collection. It was stunning from start to finish and very Owens: architectural and sensually draped, with shifts that resembled windblown forms, shaped by jutting hips, winged collars or swirled necklines, and tunics traced in geometric patches of fur, felt or sequins. In a "moment of flamboyance," dramatic gold leaf makeup daubed on models' faces highlighted the collection's Maya inspiration, specifically Frank Lloyd Wright's Mayan Revival Hollyhock House in Los Angeles, which Owens insists will be his first stop when he travels back to L.A. for the first time in 14 years, sometime in the coming months.

"I wasn't as obsessed with architecture when I lived in L.A. as I am now," he explains.

There's something heady about returning to the city where he lived for two decades, where his studio sat across the street from Lamy's 1990s Hollywood hot spot, Les Deux Cafe.

"It makes me a little leery," Owens says in the SoCal surfer drawl that he's never lost. "There's an unsentimental side of me that says I'm just being silly and superstitious, but it does feel significant. And I'd like to suppress that. It feels like an ending, which makes me nervous."

Yet, he knows that soon L.A. must become a bigger part of his life again. "Dad's 90-something and mom's 80-something, and I know they are going to get tired of coming from Porterville to Paris."

Coming home on his own terms doesn't sound half bad.

"I think L.A. is a utopia," Owens says. "A lot of the things people don't like about it are things I love about it. It's hard to find your corner, but it's nice that there is so much space in between everything. If you have something to do and someone to love, then you're OK."