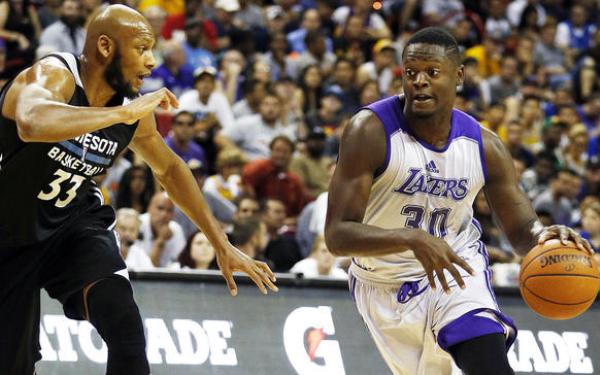 The Lakers went 1-4 in the NBA's Las Vegas summer league after thinking they could win it, bringing up a very good question.

If their young players don't make an impact while competing against other teams' kids, what does it mean for next season?

For the Lakers it can't be any worse than the 21-61 mess that mercifully ended in April, but the team can avoid printing playoff parking passes until further notice.

After a tepid (at best) few weeks of free agency for them, here's an early look at the expected roster when the Lakers' 2015-16 season begins in October.

Bad Lakers: They couldn't get free-agent big men LaMarcus Aldridge, Greg Monroe or DeAndre Jordan to take their money. Good Lakers (perhaps): They turned a 2019 second-round pick into a trade for Roy Hibbert.

He was an All-Star in 2014 but then his drop-off in production was so pronounced that Indiana Pacers President Larry Bird couldn't guarantee Hibbert a starting spot next season.

So he becomes the Lakers' latest reclamation project, the Jeremy Lin of 2015-16 with better results, they hope.

Coach Byron Scott has already said he cares about Hibbert only on the defensive end, which makes sense because the Lakers' young guards will want to push the pace.

The lumbering Hibbert can concentrate on blocking shots and working on his 44.6% accuracy from the field last season, perilously low for a 7-foot-2 player who never shoots from three-point range.

The expectations should remain marginal for a player who averaged 12.8 points, 8.8 rebounds and two blocked shots in the best of his seven NBA seasons (2011-12).

There's not much depth after Hibbert. Tarik Black was the Lakers' second-best summer-league player, behind Jordan Clarkson, and would be a double-double threat if he were two inches taller. Instead, he's an undersized center (6-11 going on 6-9) who gets by on hustle.

Lakers coaches were agog with the way the team practiced for a few days before summer league. Then the losing began.

Scott was on the backtracking train, no longer chuckling while describing D'Angelo Russell's flair for impossible-to-make passes and instead telling everybody to relax because Russell, 19, was not the next Magic Johnson. Russell's talent would take time to harness, Scott theorized, even though he was drafted second overall last month.

Clarkson, however, showed plenty of burst and extended his strong finish to last season. Don't be surprised if the second-year guard ends up with a better 2015-16 than Russell, a fair bet considering Clarkson is four years older.

Lou Williams was a nice free-agent pickup at a fair price, the NBA's sixth man of the year signing a three-year, $21-million contract in a league with an average salary creeping up on $6 million.

Oddly, though, Toronto wasn't moved to match the Lakers' offer to Williams, who averaged a career-best 15.5 points a game last season.

"I made it clear that I wanted to be there [in Toronto] and I thought, with the type of year that I had, the feeling would be mutual. Unfortunately, it wasn't," Williams wrote on his Instagram account. "I think they wanted to go in a different direction and become more of a defensive-minded team."

Uh-oh. Another defensive liability for the Lakers?

Their backup guards include Jabari Brown, who has a non-guaranteed contract, and, of course, Kobe Bryant, who can still play the position.

Bryant, who turns 37 in August, figures to be the Lakers' starting small forward next season if Scott embraces the youth movement.

How long Bryant lasts is the big question.

His last three seasons were cut short by injury and there is one more year on his contract, $25 million and all. He had some games to remember last season, more to forget and plenty to sit out for "rest" reasons before sustaining a torn rotator cuff.

Nick Young looked like a contractual mistake, unraveling quickly after signing a four-year, $21.5-million deal to stay with the Lakers last July. He got hurt in training camp, claimed he was a better shooter than Larry Bird and Reggie Miller when he returned to health, and then his over-the-top postgame celebration landed him in hot water after an overtime victory against Boston left the Lakers with a 14-41 record. His career-low 36.6% shooting accuracy didn't help.

The Lakers hope Julius Randle will be their starting power forward but his summer-league play wasn't sharp and there's a chance veteran free-agent signee Brandon Bass gets the nod.

Randle shot only 39.4% in summer league and deserves some adjustment time after sitting out 81 games as a rookie.

Larry Nance Jr., the Lakers' other first-round pick, will be an energetic power forward with a strong motor but limited touch in the scoring department.

Anthony Brown, the Lakers' second-round pick, has decent range at small forward and could see playing time if the Lakers go young.

Ryan Kelly, like Sacre, is simply happy to be here.

Paul Pierce calls the Clippers the next best choice after Lakers

Plaschke: This time, the Lakers kids aren't all right, and that's a concern