When a college degree isn't just about getting a job 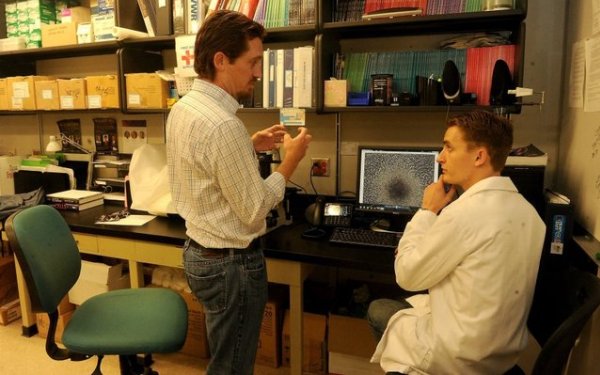 Assistant biology professor Chad Barber (left) talks about a different looking clump of cells that showed up in one of student Tristen Burt’s samples as he works in a biology lab at Cal Lutheran.
(Credit: Rob Varela / The Star)

These days, with the recession still fresh in their minds, families and politicians tend to focus on jobs and salaries when they talk about the value of a college degree.

But some universities are taking a different direction. They’re asking students to also think about their purpose, or vocation, then translate that into a life that is personally fulfilling — and benefits others.

Locally, California Lutheran and Pepperdine universities are both part of a coalition of schools, many of them religious, that have received grants to encourage students to think about vocation, along with a career.

“You’re not just here to get a job,” said Leanne Neilson, provost and vice president for academic affairs at CLU in Thousand Oaks. “You’re here to have a meaningful life. That’s nothing new at Cal Lutheran; it’s part of our mission statement. But it’s becoming a more popular concept across the country, particularly with private institutions.”

CLU is one of 190 universities nationwide participating in NetVUE, the Network for Vocation in Undergraduate Education. The organization, which grew out of a partnership between the Lilly Foundation and the Council of Independent Colleges, distributes grants so universities can infuse vocation into their mission.

CLU is using its $50,000 grant, which it received two years ago, to help 40 professors and staff members work with students on figuring out their purpose in life, said Neilson, who serves on NetVUE’s advisory council.

Chad Barber, a biology professor at CLU, is one of those faculty. Many of Barber’s students are majoring in biology because they want to go medical school, he said. But he encourages them to think about other careers they might pursue with a biology degree.

Last spring, Barber organized a series of workshops where five people involved in various science-based careers came in to talk with students. One worked in a brewery as a lab technician. Another helped organize clinical research.

“People have all different kinds of skill sets they can employ to serve society,” Barber said. “You don’t have to see patients to be helping people.”

Tristen Burt, 21, a senior at CLU, is doing cancer research with Barber this summer. Burt, who has a double major in biochemistry and molecular biology, still feels called to medicine. But now he’s thinking he might combine a medical degree with a doctorate so he can continue doing research in oncology.

“The research has opened my eyes to other opportunities available with a biology degree,” he said. “I’ve lost family members to cancer. That’s motivated me to do research in cancer.”

Faith can guide students as they think about their purpose in life, but it doesn’t have to, Barber said.

“It’s not that it’s taboo to cross science and religion,” he said. “But I tend to keep on the academic and personal level.”

At Pepperdine, though, talking with students about their purpose almost always involves faith, said Gary Selby, director of the Center for Faith and Learning.

“It’s rooted in our theological commitments,” Selby said. “We’re here for more than self-interest. ... We understand our mission as transforming the lives of students.”

Pepperdine, also a member of NetVUE, was one of 88 universities that received grants back in 1989 from the Lilly Foundation, whose philanthropic efforts focus on religion and education. The idea was that universities would use the grants to create programs encouraging students to think about vocation.

Pepperdine, affiliated with the Church of Christ, received $2 million, which it used to create the Center for Faith and Learning.

“That was a watershed moment for Pepperdine,” Selby said. “It was dramatic.”

Students now write an essay when they start at Pepperdine, responding to an article about vocation. All the dorms have a spiritual life adviser. And before they start their sophomore year, students attend a retreat where they think about their calling.

It’s not just students who are immersed in vocation. New tenure-track professors attend a weeklong workshop on faith and learning in Switzerland, where they write about their own calling.

“Our faculty undergo a major shift,” Selby said. “They start thinking in terms of the holistic formation of students.”

All students are expected to be of service during their time at Pepperdine, with that service often connected with their classes. But that service doesn’t always have to involve the big gesture — working in an orphanage in Africa or building homes in Tijuana, said Hannah Novak, who just graduated from Pepperdine with a degree in interpersonal communication.

Sometimes a small gesture — such as creating a care package for a friend who’s struggling — can have a big impact, too, she said.

“It’s not necessarily serving the homeless meals, though we did that, too,” Novak said. “We did small-scale things for each other, and that was really powerful.”

Novak’s work with campus ministry at Pepperdine became her life, she said.

“It was almost bigger than class,” Novak said. “It was my job, but also my community, my social life, my world. It really did spill over into every other area of my life.”

Now that she’s graduated, Novak is still figuring out how to tie her vocation to her next step, whether it’s her job or volunteer work. Long-term, she’s thinking about doing marriage and family counseling. Meantime, she’s been offered a few positions, but she’s still hoping to find a good fit.

“We should think about it more as a pinball game. We should let experiences bounce off the wall to find something that fits.”