Beauty and devastation in 'Life' on the Great Barrier Reef 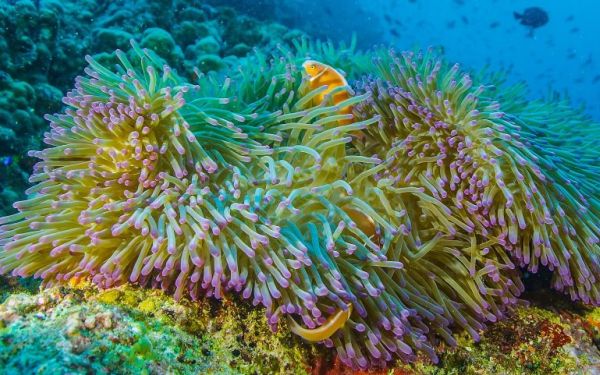 The abiding takeaway from the three-part documentary series “Life on the Reef” is that the single largest living organism on Earth — Australia’s Great Barrier Reef — is not only fragile, but in an ongoing fight for its life.

Originally made for Australia’s ABC-TV, “Reef” premieres at 8:00 PM on Wednesday, July 22, on PBS and continues on the next two Wednesdays. It’s both stunning and eye-opening, and you can’t really ask for more than that from a nature documentary.

The reef comprises some 3,000 smaller reefs and stretches for 1,500 miles along Australia’s coast. It is both home to thousands of species of flora and fauna, and a vital feeding and breeding ground for an immense variety of species, including endangered green sea turtles, as well as whales and sharks and any number of birds and insects.

Director Nick Robinson, who was also one of the film’s cinematographers, had his work cut out for him to convey the vastness and complexity of the reef to a television audience in three hours. He has succeeded by focusing selectively on representative aspects of the reef’s elaborate ecosystem, such as tiny Rain Island, considered the “jewel in the crown” of the reef.

Off-limits to the public, the island is the planet’s largest rookery for green sea turtles. The adult females of these noble, solemn creatures make their way slowly out of the sea and onto the sandy beaches of the island, using their enormous flippers to push themselves slowly but determinedly forward to dig holes in the sand, where they deposit their fertilized eggs. A deposit, known as a clutch, may contain 100 to 200 eggs.

Thousands of females from as far away as New Caledonia and New Guinea come to the island and then return to the sea. Several months later, in the middle of the night, the hatchlings break through their shells and emerge from the sand to make their way to the water.

You’d think the species population would be robust, but that’s hardly the case. The hatchlings face predators on land, including waiting ghost crabs, as well as in the reef.

Most disturbing is a severe decrease in the number of embryos that mature to the hatchling stage. Of the thousands of eggs deposited each season, only 5 percent will produce hatchlings. And of those viable hatchlings, only 1 in 1,000 will live to maturity.

As one of the scientists puts it in the film, the numbers paint “a really bleak picture for the world’s largest aggregation” of nesting green sea turtles.

There are other species threatened by changes in the ecosystem, but the film also shows us some species that are actually thriving because of those otherwise damaging changes. Overfishing of predators like sailfish, for example, has enabled a population boom for baitfish. That may seem inconsequential, but it’s still a marked alteration of the food chain. It’s good for the baitfish, but not so good for the predator fish.

Perhaps more easily understood is the proliferation of Acanthaster planci, otherwise known as the crown of thorns starfish. It’s easy to see how it got its more easily remembered name: Resembling a kind of marine cactus, the creature’s venomous spines can destroy coral reefs. And when you cut them in half, you get two coral-killing starfish. There have been outbreaks of starfish infestation in the reef in the past that have turned the coral “forest” into a kind of undersea desert.

The coral is threatened every day by both man and nature. During what Australians call the wet season, rain washes nutrients into the ocean, but it also washes fertilizer and other substances into the water, which can harm the ecosystem of the reef. Then there are storms like Cyclone Ita, a category 5 cyclone that devastated the Queensland coast over two weeks in 2014 and smashed several sections of the reef to smithereens.

Well, there have been storms for eons, you might posit, but among the many effects of global warming is the certainty of intensified storm activity on the reef.

The three parts of the film are visually stunning, as so many nature documentaries are. But that’s often the inescapable irony of the genre: All that stunning beauty may make it hard for us to understand that everything we see is in danger, or, in some cases, that it’s already too late.

The lesson in the beauty is clear: If the reef loses its battle to survive, it will irreversibly harm the environment and life around the planet.

TV Time
(Almost) every show coming to TV this summer. And 29 that aren’t
318 views