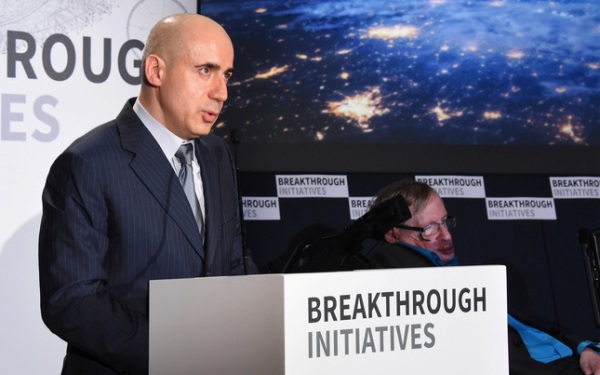 And then, there are the bets that are just completely out of this world.

Yuri Milner, the Russian billionaire who made his stake in Silicon Valley with early bets on Facebook and Twitter, is personally funding an ambitious new effort to search for intelligent alien life. Milner has offered $100 million of his own fortune to answer the question that has haunted cosmologists for decades: Are there other civilizations out there?

The money for Breakthrough Listen, as Milner calls the effort, is one of the biggest chunks of cash ever offered by a private investor for the so far fruitless quest for extraterrestrial life. It will fund what is purported to be the largest scientific endeavor to find alien life, in terms of both the expanse of the universe that will be studied, as well as the depth and detail of the data that will be collected and shared with the public.

Milner was joined by world-renowned physicist and cosmologist Stephen Hawking to announce the project Monday at the Royal Society of London.

"Mankind has a deep need to explore, to learn, to know," Hawking said at the announcement, which was recorded and shown online. "We also happen to be sociable creatures. It is important to us to know if we are alone in the darkness."

The small fortune goes to researchers at UC Berkeley's Search for Extraterrestrial Intelligence Research Center, which started in 1961 and, so far, hasn't had much luck finding an unambiguous indication of intelligent life on another planet. Milner's funding, they hope, will change that.

Through Breakthough Listen, UC Berkeley scientists will study the nearest million stars, nearest 100 galaxies and entire plane of the Milky Way galaxy and its billions of stars -- a celestial expanse 10 times wider in scope than any previous research endeavors. They will be looking for any radio waves that could signal the existence of extraterrestrial life. The Berkeley research center has access to two of the world's largest radio telescopes to assist in the search.

Milner said that while humans have been fascinated with the possibility of alien life for decades, only recently has the technology become sophisticated enough to give researchers a reasonable chance at answering that question.

"Now we have completely different software and hardware to look through the enormous amounts of data that these telescopes will be collecting," Milner said at Monday's announcement. "So it's only now we really have the capability to process as much information in a day than any previous search in a year."

Silicon Valley, with its many big-data firms and data-savvy entrepreneurs, is uniquely positioned to help with the effort, he said. All data collected from the project, set to begin next year, will be made public for anyone to see, and Breakthrough Listen will offer a platform to developers to build applications to better analyze the celestial data.

The investment will span 10 years, but no one is making any promises about a big discovery during the decade.

"It's a huge gamble, of course," said Martin Rees, an emeritus professor of cosmology and astrophysics at the University of Cambridge and project leader. "No one will count on success, but the payoff will be so colossal in recognizing that there was life elsewhere that this investment is hugely worthwhile."

Milner also announced a $1 million competition, called Breakthrough Message, to create messages that could be sent to other galaxies if we knew there was intelligent life out there to receive them. That doesn't mean any messages will actually get sent, however.

"We can think together and come to a conclusion about whether or not it's wise to send such a message and what specifically we want to convey about who we are," said Ann Druyan, a project leader and creative director of NASA's project to send a message to extraterrestrials through the spacecraft Voyager.

The investment underscores the intense interest of Silicon Valley tech executives and investors in exploring space -- and putting in huge sums of money to do so. Larry Page and Eric Schmidt of Google, Elon Musk of Tesla and Charles Simonyi and Paul Allen of Microsoft are heavily investing in space. PayPal has invested in finding an Internet payment methods that will work in space as the celestial tourism economy grows.

Milner said his interest stems from the years he worked as a theoretical physicist in the 1980s. Back then, he was excited about space exploration, but without the technology, it seemed little more than a fantasy.

"It is now a truly scientific quest," he said. "In the 20th century, we stepped out from our planet to space, to the moon, to the solar system. In the 21st century, we'll find out about life at the galactic scale.

"It is time to open our eyes our ears and our minds to the cosmos."