The Beauty Academy of Kabul 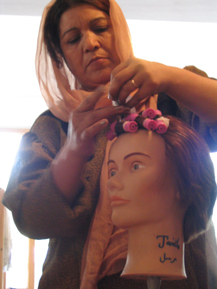 While merely fodder for celebrity tabloids in the U.S., the arts of makeup and hairdressing represent much more in Afghanistan, where, under harsh Taliban rule, women were forbidden to operate or visit beauty salons. In The Beauty Academy of Kabul , a documentary from director Liz Mermin, the lives of a handful of women in Kabul, Afghanistan are changed when a team of American women open up the first-ever beauty school in the terror-ravaged country.

The documentary was spawned by a 2001 article in Vogue magazine profiling a 73-year-old American named Mary MacMakin, who worked with women in Kabul until she was arrested and expelled by the Taliban. It follows a small group of U.S.-based hairstylists and female Afghan refugees as they arrive in the country and set up a beauty school. Through hard work and countless donations, they fill the school – and attached salon – with mannequin heads, Frederic Fekkai scissors and MAC makeup.

On the first day of class, the salon is packed wall-to-wall with hopeful attendees. Moving past the days of Taliban rule, under which women were required to wear an item of clothing called a Burka, which covered their entire face and body, the women of Kabul see the beauty school as one step closer to the country's reformation. Many currently run salons from home, without any formal training, and are happy to have a chance to learn the professional tricks of the trade.

While the overall gist of the film is to show viewers that opening a beauty academy in Kabul is one small step in healing the wounds of a whole country – and pushing for women's rights – sometimes Mermin's direction comes off in a wistful way; and makes people think, is teaching hairdressing really such an important tool for rebuilding a ruined country? Apparently it is, as many women find solace in the art, and can pass on their teachings and newfound confidence to other people in Kabul.