The whoppers start after researchers trick college guys about their masculinity 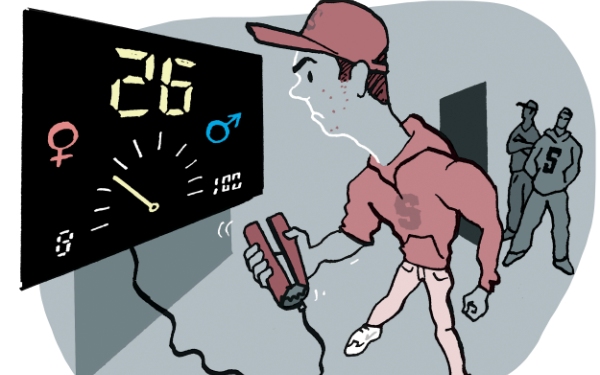 Pity the male of the species. It’s so easy to threaten his masculinity, then watch him try to compensate by simply lying about himself.

“Manning Up” is a recent research paper headed by Sapna Cheryan, a University of Washington associate professor in psychology.

It begins in a rather unusual manner for an academic study — by quoting from Johnny Cash’s 1969 hit, “A Boy Named Sue.” The one that goes, “Some gal would giggle and I’d get red …” Then the study catalogs the reactions from guys the researchers duped into feeling masculinity-impaired through phony results from grip and personality tests. The sampling was a bunch of college undergrads recruited at a dorm in exchange for $3 gift cards.

The study was a bit more diplomatic, not using “lie” but “exaggerating.” The study also concluded that guys who feel masculinity-impaired also distance themselves from what they perceive as girl stuff.

Go to a basketball game? Yes. Go to a body spa? No way. Movie and popcorn, yes. Watching a dance ensemble? Ha. Home Depot, yes. Banana Republic? Hmmm, no thanks.

And the study showed something else: how gullible we all can be, if a test looks scientific enough.

The undergrads, all from Stanford University, which is where Cheryan was when the research was done, fell for a couple phony tests, with phony results, that made them believe their masculinity was in question.

In one test, the 36 guys were told the strength of their grip would be measured. They squeezed on something called a Jamar Handgrip Dynamometer, which had a meter attached, kind of like on a bike pump.

“We couldn’t even read it,” Cheryan says about the meter. It didn’t matter. It just had to look sciencey.

Then the guys were shown phony results. One group was told they scored right in the middle for a masculine score. But another group was shown a bogus bell curve that placed their grip strength similar to that of a woman.

In the other test, guys were given multiple-choice questions to supposedly measure their “masculinity compared to those of other men.” For example, they were asked whether they’d prefer to drive a Honda Civic, Ford Taurus, Toyota Camry or Volvo C70.

The questions were designed “so that no answer was obviously masculine,” according to the paper. One group of guys was told they had scored 73, and that the median score for a guy was 72. These guys didn’t exaggerate later. And then there was the other group, who were told they had scored … 26.

And so the lying began from the masculinity-threatened guys. Cheryan points out that everyone knows their height — from a driver’s license or filling out various forms. The researchers had the actual height measurements for the subjects. The threatened guys “exaggerated their height by three-quarters of an inch,” Cheryan said. Not so with the non-threatened guys.

By the way, government figures show the average American male in his 20s is 5 feet 9.4 inches tall. Six feet and over puts you in the top 20 percentile.

But you women who log onto OKCupid are familiar with all that. Cheryan said she does feel a bit sorry for the male species.

As other researchers have put it about masculinity, she says, “Hard won, easily lost.”