Artist Rafa Esparza is using 5,000 adobe bricks to make a building-inside-a-building in Hollywood 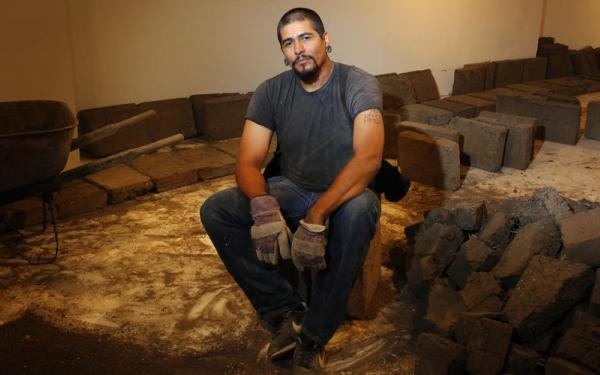 Step into Los Angeles Contemporary Exhibitions (LACE) in Hollywood and you will feel the crunch of dry dirt underfoot. Here and there are bits of straw. All around is the smell of earth. And all of it is emanating from the hundreds of hand-made adobe bricks that are stacked around the gallery, hand-crafted by artist Rafa Esparza and a team of assistants.

"I want people to feel, smell and be immersed by earth," he says, gesturing around the room in his dusty work clothes. "I want them to be surrounded by it. I want this to be an all-around sensorial experience that is completely different from what people normally experience when they walk into a gallery."

Over the course of the next several weeks, Esparza will use the bricks to build a structure that will occupy the entire interior perimeter of the gallery. It will be 70 feet deep and 35 feet wide and rise to a height of 10 feet.

Elliptical in shape, it will do away with the room's corners. And consisting only of the mud color of the bricks (the structure will be held together by a similarly shaded adobe mortar), it will cover the whiteness of the gallery walls. Employing a sum total of 5,000 adobe bricks (give or take a few) Esparza aims to erase the contours of the traditional exhibition space — the so-called "white box" — and all of the cultural signifiers of exclusivity, class and race that go with it.

"I want," he adds, "to overwhelm people with earth."

And when it is finished — at some point in the next few weeks — the structure will become a space that visitors can inhabit, as well as a place of performance.

There will be happenings staged by various Southern California artists, including singer and performance artist Dorian Wood, playwright Ricardo Bracho, artist Raquel Gutierrez with Adam Garcia, as well as Esparza himself. (Though he hasn't yet figured out what exactly he will do. "It's about being in the space," he says, "and letting that inform it.")

The project is part of a regular summer residency program at LACE, in which an artist is invited to take over the gallery space with a project that engages the public over the course of the summer season. It is possible to walk in and observe Esparza building the structure at this time.

Gallery spaces, however, aren't generally the sorts of locations that the artist works in. In the four short years since he graduated with a bachelor's degree in fine arts from UCLA, Esparza has become known around Los Angeles for visceral performances — touching on issues of colonization, male sexuality, freedom, home and family — that often take place in odd corners of the city.

He has performed a work (in collaboration with choreographer Rebeca Hernandez) on a sliver of earth by the L.A. River that commented on the symbols of power. Last year, he built a temporary dry sauna on the site of an old bathhouse in East L.A. And in April, he carved himself out of a pedestal made from concrete on a street that lies within view of the Twin Towers Correctional Facility in downtown Los Angeles.

The project at LACE, says curator Shoghig Halajian, who has followed Esparza's work for half a dozen years, is a different way of working for the artist. But she is confident that it will transform the the organization's storefront space on Hollywood Boulevard in unexpected ways.

"There's something about the attentiveness he has," says Halajian. "He has a great relationship with sites, with his body, with the forgotten spaces of Los Angeles."

Esparza, 33, was born and raised in Pasadena, the son of Mexican immigrants from Durango. He said he always knew he would be an artist (he painted for many years), but he didn't find his voice until he became a student at East Los Angeles College, in Monterey Park, where he was exposed to the work of groups like Asco, the long-running Latino art collective whose work straddled photography, installation and performance.

His interest in performance would be further solidified during his years at UCLA, when he became familiar with the work of artists such as Ron Athey, whose actions employ elements of sadomasochism and body modification, among other practices. (Athey, who is gay, was at the center of a media controversy in the 1990s related to an exhibition at the Walker Art Center in Minneapolis, in which he drew blood from himself and a fellow artist.)

"The way that he used the body was so important," says Esparza. "The queer body was already seen as political. He was playing with the idea of contamination. But there was also a vulnerability there."

Esparza also like the fact that performance could be done anywhere — and for cheap.

"I liked the idea of how accessible it was," he says. "All you need is your body."

For Esparza, the assertion of that body in public space, and in relation to the landscape, has been an important facet of his artistic practice. He began working with adobe in 2011 as a way of, literally, "finding a relationship to the land," but also as a way of improving his relationship with his father.

"I was living with my boyfriend, feeling disconnected to any place," he says. "My father and I weren't really talking — he was still coming to terms with my queerness. So, I had this idea of making adobe bricks."

His father, Ramón Esparza, had manufactured adobe bricks back in Mexico and had built his first house there out of adobe. "He would make bricks to sell and then keep some to build his home," says Esparza. "It was survival kind of work. But it would take imagination to use those bricks to build a house, to decide who would live in it, what shape it would take."

His father taught him how to make the bricks and the pair ended up manufacturing a stack of them that the artist later employed in a performance titled "Casa Adobe" at SOMArts in San Francisco in 2011. For that piece, Esparza suspended the bricks in an armature and then proceeded to smash through them while wearing clothes that had belonged to his father and brothers.

"I was thinking about masculinity," he explains, "and notions of masculinity."

His father wasn't present at the performance, but Esparza told him about it afterwards. "He was a bit shocked," he chuckles. "He couldn't understand why anyone would make all these bricks, then destroy them."

Since that time, relations between Esparza and his father have improved, and the artist now regularly calls on his dad when working on art projects. Last year, the pair created bricks for various performance and installation pieces, including "Con/Safos," an adobe brick wall that served as a canvas for other artists at the Bowtie Project, a 19-acre outdoor space on the banks of the L.A. River. (He has been making his bricks at a space in that area, with water from the river, courtesy of the cultural group Clockshop.)

The project at LACE, however, is his biggest yet — one that will reconfigure the nature of the art gallery. And it will hopefully connect the viewer with one of the most ancient building materials on earth. "The material is really alive," he explains. "Some of the bricks that we transported already had things growing out of them."

But the installation, like of all Esparza's work, is also layered with issues tied to politics and environment.

Shortly after our interview, the artist emails me a quote that is frequently attributed to Mexican revolutionary hero Emiliano Zapata: "La tierra es de quien la trabaja con sus manos." ("The land belongs to those who work it with their hands.")

"The quote is an assertion of rights to land by the people who work it," notes Esparza. "I'm less interested in the owning of the land, but it is still a reclamation of sorts. It's gesturing towards making with dirt, a material we are surrounded by, but are rarely making contact with because of all the concrete and cement."

Being in touch with the earth in this way has already shifted his relationship with Los Angeles.

"My own relationship with the L.A. River is forever marked by this experience," he says. "Because we've been using it to make the bricks, I don't see it as just a channeled body of water anymore. It's cyclical. I see it as a source of life, of sustenance."

The project, he adds, isn't about claiming land as a belonging, but instead a way of saying, "I belong here."

Within the context of the whitebox gallery, that message will be even more powerful. And like the material it is made of, it too will have a cyclical quality. When the walls come down in September, Esparza will carefully pry the bricks apart and employ them in another work.

"I always like," he says, "for things to have another life."

Rafa Esparza, "i have never been here before," is on view at LACE through Sept. 13. 6522 Hollywood Blvd., Hollywood, welcometolace.org.