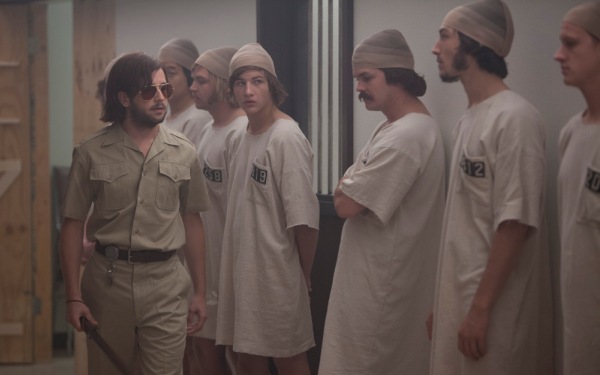 The Stanford Prison Experiment is a straightforward dramatization of the 1971 experiment of the same name. Nothing fancy here — director Kyle Patrick Alvarez and screenwriter Tim Talbott just tell the story and let the material unfold at a natural pace, because they know something that the audience soon figures out: These events are so gripping and so creepy, and ultimately so dispiriting in their implications, that no embellishment was necessary.

The study, under the direction of psychologist Philip Zimbardo, involved 24 students, who were randomly assigned to be either prisoners or guards. A mock prison was set up in the basement of one of Stanford’s academic buildings for the purpose of understanding how the roles of guard and prisoner influence human personality. The intention was to see what would unfold after two weeks, but events were already deteriorating after two days.

Though the guards were prevented from physically abusing the prisoners, they went up to the line and occasionally crossed it. But mainly the abuse they inflicted was psychological. Rebellious prisoners were thrown into “the hole” (i.e., a locked closet). They were made to strip, deprived of bathroom facilities and were verbally abused around the clock.

While the guards came in fresh at the start of each new shift, the prisoners were confined all day. Not content to let the prisoners rest in the cells, these guards would arrive for their shift wanting entertainment, and there was only one form available — making the prisoners miserable.

Of particular interest here is the guard known as “John Wayne,” even though he was deliberately imitating Strother Martin, the evil warden from “Cool Hand Luke.” As played by Michael Angarano, he is clearly playing a role and amusing himself. At the same time, he is being willfully cruel. So what do we make of this kind of behavior? It’s a joke, but not a joke. Perhaps it’s what actors refer to when they talk about finding the truth by putting on a mask.

That people, or certain people, will be sadistic if given permission by an assigned role is hardly consoling. Does any prison guard think, “I am a prison guard. That is my identity”? Everything is, to some degree, a performance, and the idea that some inner mechanism of emotional distance can allow people to unleash their cruelty and sadism is especially disturbing. It means that people can do things they would never own. They can be mock prison guards, or real prison guards, or concentration camp functionaries, or the ghoulish soldiers at Abu Ghraib, and think, “This isn’t really me.” But of course it is.

Though most of the drama takes place inside the mock prison, there’s another drama, too, in which the experiment’s conductors find themselves being affected and drawn into the prison mentality. As Zimbardo, Billy Crudup adopts an implacable facade, and for a while we don’t know what we’re seeing — a humanitarian on the brink of discovery, an ambitious monster who has found the winning ticket, or a young professor in way over his head.

That this was a controversial experiment, whose findings have been the subject of debate ever since, comes as no surprise. But history, before and since, suggests that it encapsulates an essential truth. For that reason alone, The Stanford Prison Experiment, which illustrates and dramatizes that truth, is worth seeing.