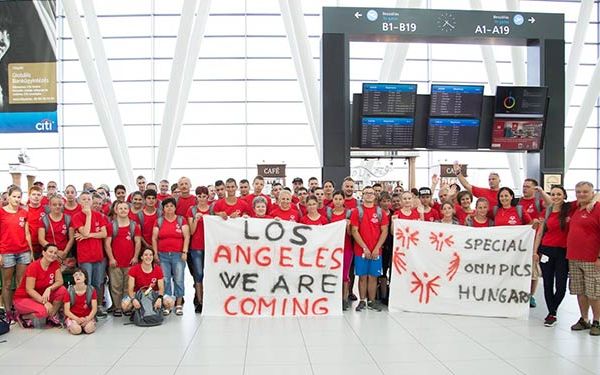 When Los Angeles last hosted the Special Olympics in 1972, about 3,000 athletes from the U.S. and Canada participated in the four-day event on the campuses of UCLA and Santa Monica College.

Forty-three years later, the Special Olympics World Games are back with much bigger numbers to a city hoping to show it can still host a worldwide sporting event. The nine days of competition will mark the biggest athletic gathering since Los Angeles hosted the 1984 Summer Olympics.

For a city that this year narrowly lost the race to host the 2024 Summer Olympics and where tourism is a top employer, positive exposure is always a welcome commodity.

"By hosting this event here, it sends a strong message for other events in the future," said Patti MacJennett, senior vice president of business affairs for the Los Angeles Tourism & Convention Board.

About half a million people are expected to watch about 6,500 athletes with intellectual disabilities representing 165 countries participate in the event, starting Saturday. The competitions and ceremonies will be covered by 1,600 credentialed reporters and will take place on the campuses of USC and UCLA, in downtown L.A., Griffith Park, Encino and the waters off Long Beach.

The event is expected to spark at least $387 million in spending, including $25 million in state and local taxes, according to an economic forecast drafted in 2013. The worldwide exposure may also help Los Angeles promote its new downtown clubs, restaurants and hotels, including the entertainment complex L.A. Live.

"You are going to have reporters from around the world, covering the games that have come to Los Angeles," said Jeff Carr, chief operating officer of the 2015 Special Olympics World Games. "When they write about Los Angeles, that will have an impact."

The Special Olympics are expected to have a bigger economic effect on L.A. county than the 2011 NBA All-Star Game ($85 million in spending), the 2012 Primetime Emmy Awards ($42.6 million), the 2013 Academy Awards ($67 million) and the 2013 Tournament of Roses football game and parade ($306 million), according to past studies by the economics research firm Micronomics.

Lynn Mohrfeld, president of the California Hotel and Lodging Assn., said he has heard from at least one hotel that reported several canceled reservations from Special Olympics guests in the last month. But he said many other hotels are booked solid for the span of the event.

"Looks like a mixed bag as far as rooms sold go," he said, adding that many of the guests are international visitors who typically stay a few extra days to visit regional tourism attractions.

The 160-room Luxe Sunset Boulevard Hotel, about two and a half miles from the UCLA campus, is hosting Olympics staff and family of some of the athletes, said Amy Commans, general manager of the hotel.

"We sold out six to eight months ago," she said.

"We want them to go back and tell everyone how great their experience was," Commans said. "We are here to make friends."

The 1,001 rooms of the JW Marriott and Ritz-Carlton near the Staples Center are nearly booked for the event, thanks partly to Special Olympics dignitaries who are staying at the skyscraper hotel complex.

"We have an opportunity to showcase our fantastic city and all that is has to offer to the people around the world," said Javier Cano, general manager of the hotels.