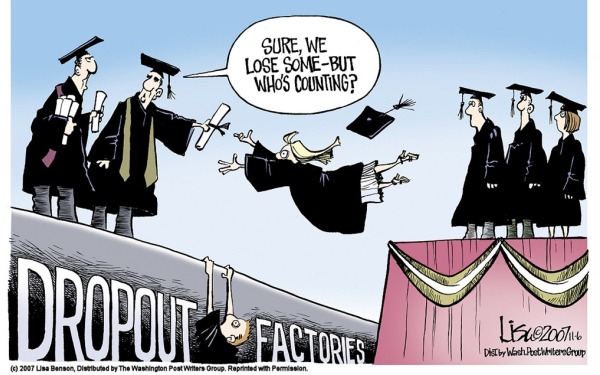 To Omar Medina, a security officer working the graveyard shift, attending Northwestern California University School of Law seemed like the ideal way to fulfill his dream of becoming a lawyer.

Medina enrolled in the unaccredited school. He said he paid about $3,000 a year in tuition.

But almost from the start, the Marine Corps veteran struggled. He said he frequently asked for help, but got little. Less than two years later, he gave up.

Medina's situation was hardly unusual: Nearly 9 out of 10 students at California's unaccredited law schools dropped out, according to a Times investigation based on recent state bar data.

Medina's first-year class in the fall of 2006 had 414 students; 54 remained by the fourth year, data showed.

Of the few who completed classes at the unaccredited law schools, only 1 in 5 ever became a lawyer, according to state records.

These law schools have flourished because California is one of a handful of states in the nation that allow students from unaccredited institutions to take the bar exam. The 22 schools offer four-year programs and are required to register with the state bar, but they are held to few academic standards.

Most of the schools are operated by small companies or individuals. Peoples College of Law, in Westlake, is one of the few nonprofits and counts former Los Angeles Mayor Antonio Villaraigosa as an alumnus. (He took the bar four times but never passed.)

Faculty typically are working attorneys. They don't receive tenure and generally aren't paid much — "gas money" as one law school administrator said. They work at the schools out of a desire to teach.

Unlike accredited schools, the unaccredited campuses exist in a regulatory gray area where they are not required to meet the same standards.

"Most jurisdictions simply don't allow this kind of law school to exist at all. Period," said Frank Wu, chancellor and dean of UC Hastings College of Law, a nationally accredited campus. "California is very, very unusual."

Over the years, there have been unsuccessful attempts to phase out the unaccredited schools.

Some current bar officials say the high attrition rate shows that these schools are rigorous enough to weed out students who have little chance of success.

The schools "show people very quickly that studying the law, even online, is much harder than getting an associate's degree from community college," said George Leal, the bar's director of educational standards.

Law schools can be accredited either nationally or by the state. National accreditation requirements are more rigorous than California's. The state's elite law schools, such as those at UCLA and Stanford University, are accredited nationally by the American Bar Assn., and are designed to take three years to complete.

Unaccredited law schools have no bar passage requirement and are four-year programs.

Patti White, a lawyer from San Jose who is chair of the state committee of bar examiners, which oversees both unaccredited and accredited schools, said she and others are concerned about unaccredited schools "not giving the students who pay money to attend them a realistic chance of passing the bar."

"They aren't even diploma mills, they are failure factories," said Robert Fellmeth, the Price Professor of Public Interest Law at the University of San Diego School of Law. "They're selling false hope to people who are willing to put everything out there for a chance to be a lawyer."

School operators argue they provide a valuable service by offering an opportunity to students who don't have the financial ability or academic qualifications to attend a traditional law school. UCLA’s School of Law, for example, costs $45,284 per year for California residents.

Students at unaccredited schools generally are not eligible for federal grants or scholarships.

The schools cater to working people, many without bachelor's degrees who are juggling full-time jobs and supporting children.

"Our students are older. They have different needs than the 24-year-olds coming out of school and are willing to take on a $150,000 debt," said Larry David, dean of Concord Law School of Kaplan University, the state's largest unaccredited legal campus. "Is everybody who comes to us going to make it? No, but our mission is to work hard to give everybody the education we believe they're entitled to."

The school charges $9,984 a year and had 640 students in the law program last fall, state bar records show. More than 4 out of 5 Concord students didn't make it to their fourth year, according to the Times analysis of state bar data of those who started in 2010 and 2011.

Since it opened in 1998, Concord has produced 464 attorneys, according to the school's website.

Four online schools, including Concord, enroll 75% of the state's unaccredited law students, according to the Times analysis.

Then, there are a patchwork of tiny law schools. One of these is run by Larry H. Layton, who opened his school in an Acton strip mall above a now-shuttered Mexican restaurant.

He thought the Larry H. Layton School of Law, which charges about $15,000 a year, would grow quickly. But according to the state bar records, he's had six students since 2010. He insists that number is somewhat higher and said he's trying to attract students.

He's advertised in local newspapers and pushes the school on social media with catchphrases like: "Your car is safe at Larry's law school in rural Acton, Ca."

Medina said he took school seriously. He tried to squeeze in study time whenever he could, often listening to lectures on the van pool to and from work as a Southern California Edison security officer, or between shift changes. He rarely slept more than four or five hours a day.

Still, his grades skated near the bottom. He twice failed the baby bar, which tests a first-year student's understanding of the law and is required by the state bar only for students at unaccredited law schools.

Northwestern California, which opened in 1982, has offices on the third floor of a Sacramento office park. Each year, it typically enrolls about 600 students, who are spread throughout the globe and take virtual classes. They are required to complete 864 hours of study a year, which the state bar requires of those enrolled in online and correspondence schools.

Medina, 35, said that when he called Northwestern California's offices to ask for extra help from professors, he was told to post questions online and wait for responses, or pay a few hundred dollars more for additional classes.

"As far as guidance, there wasn't much," Medina said.

On its website, Northwestern California touts the years its graduates performed well on the bar exam. For example, it boasts that in February 2007, 44% of its students passed the bar on their first try; the web page does not mention that that meant four students passed. "Yet, of course, there are times when the pass rate is disappointingly low, even zero," the website says.

Without dropout rates, prospective students don't have a complete picture of how few of Northwestern California's students who enter the four-year program become lawyers.

Clancey said only a small portion of the students who drop out do so for academic reasons — mostly it's for financial or other reasons — and that the school provides quality education to anyone willing to put in the work. While he said he couldn't discuss specific students, he said a person in Medina's situation "may have given up his goal too soon."

"For most of those who [dropped out] from the program, life events simply get in the way of their efforts to study," he said.

Medina said he wished he'd known about Northwestern California's dropout rates before he invested his time and G.I. Bill benefits in the school. (Those rates are available only from the California bar offices in San Francisco.)

"Something had been masked as far as their effectiveness," Medina said. "If I'd known that I'd have gone in a different direction.... If I knew what I know now, I'd see right through that smoke screen. They got me."

Medina went on to get an MBA from the University of Phoenix, another online school, and is trying to start his own business.

Some attorneys, however, say they owe their careers to unaccredited schools. Jon Straub, a Newport Beach-based attorney who specializes in cases regarding driving under the influence, said he needed the flexibility of an online program to attend law school without having to quit his job as a commercial pilot.

Straub, who attended Northwestern California, used his off-time between flights to study, a luxury he knew many of his classmates didn't have. "I had the time to invest," he said, "and it was a huge advantage."

On a flight home to Los Angeles from a business trip in Orlando in 2005, Hyung J. Park was flipping through a SkyMall magazine when an ad for a correspondence law school caught his eye. When he got home, the South Korean-born tax attorney said he called the school to see whether it was legitimate.

Park decided to open his own school and began holding classes in a conference room at his office.

He named the school after Abraham Lincoln, because he had admired the 16th president since reading a biography of him in the fourth grade in Korea. Lincoln appealed to Park largely because he taught himself the law.

His first class had a dozen students — his wife among them.

"I thought, if I do it the honest way, if I spend a lot of time, there's some potential" to help people become attorneys, said Park, who graduated from Loyola Law School. "That's why I set it up."

The school became a family enterprise: Park's daughter, Jessica, an attorney who graduated from Stanford Law School, also works there.

Abraham Lincoln University had 117 students last fall and now occupies offices on the 14th floor of a Koreatown high-rise. Tuition is $8,000 annually.

About 80% of students who enrolled at Abraham Lincoln dropped out or failed by their fourth year, according to the Times analysis.

Park described the average Abraham Lincoln student as a person in their mid-40s who has a job, children and other duties. If his students were younger and had fewer responsibilities, "I guarantee I would have a 95% [bar] passing rate," he said.

A former employee said the law school seemed focused on recruiting students even if they had little chance of succeeding.

Catherine Maxwell, a former admissions officer, said she was asked to purchase the list of bottom-scoring LSAT students who would probably have a hard time getting admitted elsewhere.

"They were always aiming at the total bottom of the barrel," said Maxwell, who worked there from 2011 to 2014.

Park said the school does purchase lists of people who scored poorly on the LSAT, and that "we do not take anyone we think cannot succeed."

Natasha Travis, a former assistant dean, said that even though she never knew exactly how few Abraham Lincoln students went on to become attorneys, their bleak prospects were apparent to her. Many appeared to lack the skills to grasp basic concepts and make it through law school, she said.

"The ones who can pay the tuition were the ideal candidates," said Travis, who now works in private practice.

At an open house in the spring of 2009, she said she frankly told prospective students that very few of them would graduate, fewer would pass the bar and fewer still would find lucrative legal jobs.

Travis, who was an at-will employee, said she was terminated shortly thereafter.

Park denied that Travis was let go for remarks that she made. He said such an action would be considered retaliation and could leave the school open to litigation. "I'm not that stupid," he said.

One of Park's former students is Arnold Bustillo. He originally enrolled at Northwestern California but lasted only three months. He moved to Abraham Lincoln, and failed the baby bar after his first year.

But the 29-year-old Air Force veteran isn't ready to give up. He's hired a tutor and plans to give the baby bar another try.

"It's something I've always known I'm going to do," he said.