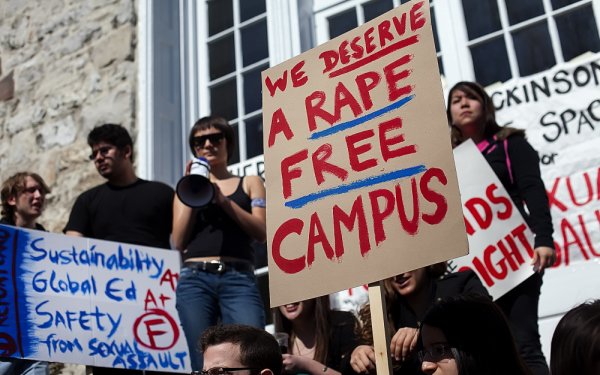 Responding to inconsistent policies on sexual assaults at college campuses, California lawmakers are considering a package of proposals to address the issue, including one that would require schools to disclose more information about disciplinary actions taken against student offenders.

Another proposal would require all public colleges and universities to note on transcripts when a student is ineligible to re-enroll because of suspension or expulsion.

Two other measures would expand the purview of community colleges in handling sexual assault cases.

"The state of California has an obligation to provide a safe and secure learning environment at our colleges and universities," said Assemblyman Das Williams (D-Santa Barbara), author of several of the bills. "We need to take proper steps to ensure they are a safe place, because they are not safe right now."

Under federal law, schools must take immediate steps to address sexual discrimination, harassment or violence on campus. The U.S. Department of Education's Office of Civil Rights is currently investigating more than 100 universities across the country for allegedly failing to properly handle concerns about sexual assault.

The discussion in California's statehouse is "a conversation that is beyond overdue," said Sofie Karasek, a UC Berkeley student and co-founder of the group End Rape on Campus.

She filed a civil lawsuit last month against the University of California, alleging that university officials failed to properly inform her about the complaint process, keep her updated on an investigation or allow her to participate in a disciplinary hearing.

Karasek said schools have an important role in responding to sexual assault complaints. Victims may not want to continue attending the same classes or living in the same dorms as their assailants and may hesitate to report incidents to law enforcement agencies because extended court cases could be newly traumatizing, she said.

Others argue that colleges do not have the resources or abilities to investigate sexual assault complaints.

"I think that these measures would be way less objectionable if there were any sense that the results of campus tribunals were reliable," said Joe Cohn, legislative and policy director at the Foundation for Individual Rights in Education, a Philadelphia-based nonprofit that focuses on free speech, religious liberty and due process in higher education.

"You can't open any newspaper anywhere in the country without reading about how some school botched it," Cohn said.

This month, a court struck down the suspension of a UC San Diego student who had been accused of sexual assault. The judge found that the student had been improperly prevented from fully confronting and cross-examining his accuser during a university disciplinary hearing.

"College administrators should not be conducting criminal trials for serious crimes, and our state Legislature should not mandate punishments at these quasi-judicial hearings," Grove said.

Williams said he introduced his legislation after hosting hearings at University of California campuses across the state.

At UC Santa Barbara, four of the 36 sexual assault cases resolved from 2010 to 2014 resulted in suspensions and none led to expulsions, university figures show. In nine of the cases, the alleged perpetrator withdrew from the school and no hearing was held.

UCLA, however, moves forward with its disciplinary process even if an accused student has left the university after a complaint is filed.

Williams said he saw a need for more consistent discipline to deter assailants and encourage more victims to report incidents.

One of his measures would require schools to develop consistent standards for handling sexual assault offenses and annually report statistics on the outcomes of disciplinary hearings.

Federal law already requires schools to report the number of sexual assault complaints they receive, along with the dates and general locations of the alleged crimes. Williams wants California's colleges and universities to also disclose the number of complaints investigated, the number of investigations that led to findings of responsibility and the type of disciplinary action taken.

The information would have to be posted publicly every year on an institution's website, in a manner easily accessible to students, starting in 2017.

The proposals would apply to all colleges and universities, public and private, that receive state funds for student financial aid.

Williams also wanted to require a minimum two-year suspension of any student who, after a disciplinary hearing, is found responsible for a sexual assault. But he removed that mandate from his legislation after college officials balked, concerned about lawsuits challenging their decisions.

The institutions also argued that they need discretion in adjudicating sexual assault cases. They cited instances in which both the alleged offender and victim were intoxicated, memories were hazy and no witnesses were present, preventing clear-cut resolutions.

"We are obligated to provide a fair and impartial process to both the alleged perpetrator and the alleged victim," she said.

Advocates for victims of sexual assault have, for the most part, supported the amended measure.

"I think the first one had teeth," said Savannah Badalich, a recent UCLA grad and founder of 7000 in Solidarity, a student-led campaign against sexual assault.

Still, she said, "I feel like this amendment is a nice, happy medium while we transition to taking this issue way more seriously."

Other measures would allow community colleges, for the first time, to suspend or expel students for sexual assault offenses that occur off campus and to require that applicants disclose past expulsions for sex offenses.

"We want to make sure that we have tools in place to provide a safe and secure environment for our students," said Vincent Stewart, vice chancellor for government relations in the California Community Colleges Chancellor's Office, which supports the expanded jurisdiction.

All of the legislation has passed one house and is pending in the other.

Campus News
What’s the risk of COVID-19 for a healthy young person?
677 views