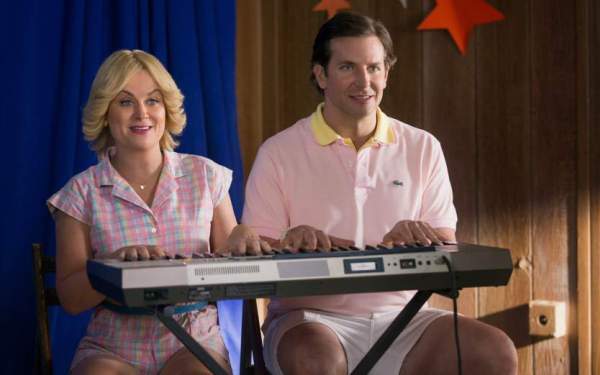 “Wet Hot American Summer” was a 2001 comedic romp whose cult status has only grown over the years. Why? Because several members of the cast were on their way to A-list status, but also because the movie was a spot-on spoof of other spoofs, namely, summer camp movies like “Meatballs.”

The film was directed by David Wain, who also wrote the script with Michael Showalter. Critics didn’t love it, but that probably only helped its enduring cult status.

In addition to spoofing camp movies, the film’s humor was rooted in the fact that many of the actors playing camp personnel were older than their characters were supposed to be. Fourteen years later, they’re back in the series, “Wet Hot American Summer: First Day of Camp” and they’re even older, and sometimes funnier because of it. The series is available for streaming Friday, July 31, on Netflix.

As with the movie, audiences get stock characters in familiar situations. There’s the nerdy guy desperate for a girlfriend (mop-haired Alan,, played by Showalter), the well meaning camp administrator (Janeane Garofalo as Beth) who secretly wishes she could loosen up, the motorcycle-riding, self-styled God’s gift to women (Andy, played by Paul Rudd), the sex-obsessed braggart (Victor, played by Ken Marino), the “Waiting for Guffman” wannabes Susie and Ben (Amy Poehler and Bradley Cooper) who bring in a seventh-rate professional director with a lot of attitude and ego, but no talent, to direct this year’s camp play. His name is Claude Dumet (John Slattery). Pronounced “duMAY” as opposed to “DUM-ett,” or more to the point, “DUM-my.”

The camp play is one of the recurring plot strings, along with trying to save the camp from going out of business, getting the goods on corporate dumping of chemical waste just outside the camp, Alan clinging desperately to the illusion that Donna (Lake Bell) is his girlfriend, although she could be; Beth trying to attract the attention of nerdy scientist Henry Newman (David Hyde Pierce), badly wigged camp cook Gene (Christopher Meloni) trying to keep his desperate, weepy fiancee Gail (Molly Shannon) from learning the truth about his past and identity, and nerdy camper Kevin (David Bloom) trying to fend off bullies and find the courage to have an actual conversation with fellow camper Amy (Hailey Sole).

Of course the show is uneven, because it almost has to be. The film was uneven as well, which was one of its charms. Some of the jokes misfire in the Netflix version, others hit it out of the park. If one plot string doesn’t hook you, wait two minutes for the next one and you may have better luck.

There probably isn’t enough material in the “Wet Hot” concept to make a sequel film, but the dirty little secret of “First Day of Camp” is that there really isn’t enough to make an ongoing series either. But the one thing about the series is that you can take it in small bites, and that’s pretty smart.

It may be “Wet, Lukewarm American Summer,” but it’s perfect mindless entertainment to warm up your own American summer.