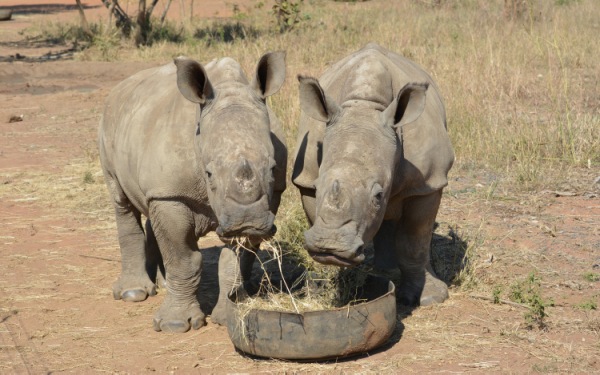 STERKRIVIER, South Africa — The cry of the orphaned baby rhino, left alone when its mother has been slaughtered by poachers, is a heart-tugging sound somewhere between a dolphin’s song and a kitten’s mew.

The lucky ones, rescued and taken to South Africa’s Rhino Orphanage, call out for the milk that’s fed to them by hand three times a day. Older orphans squeak excitedly when caregiver Jamie Traynor and the other staff feed them buckets of dry food.

Thandi was rescued from a private game reserve after surviving a poaching attack in which her mother was shot to death and had her horn hacked off.

A bullet had pierced the young rhino’s neck, and she had scratches on her hide and had lost half an ear when lions attacked her, left alone and vulnerable, after her mother’s death.

On her first morning at the orphanage here in Limpopo province, Thandi was tentative, trotting away at the sound of a human voice. Released into a bush enclosure, she struggled to find her place among the other rhinos. She tagged along behind them like a lost puppy and was bullied away by two young males. She watched forlornly, then followed them again, only to be pushed away once more.

“I wish she was eating,” said Traynor, anxiously watching from a Jeep. “She’ll settle in.” Within a few days, Thandi had befriended two other female rhinos.

More than 1,200 rhinos were killed by poachers in South Africa last year, a staggering increase from 2007, when 13 were killed. The deadly trade, which threatens South Africa’s 20,000-strong rhino population with extinction, is fueled by wealthy buyers in China and Vietnam, who use rhino horns in folk medicines, including as a hangover cure.

By May 6, 550 rhinos had been slaughtered, spurring fear that a record number will be poached this year.

South Africa is home to three-quarters of the world’s rhino population. Most of the poaching takes place in Kruger National Park, surrounded by poor South African and Mozambican communities, for which the financial reward is too tempting. Poaching syndicates exploit corruption among law enforcement officials in Mozambique and South Africa, making it almost impossible to control the smuggling.

Some experts, like Gaby Benavides, manager of the Rhino Orphanage, fear that wild rhinos won’t last much more than a decade.

Calves are often left behind when their mothers are killed. Benavides often drives six or seven hours to collect orphaned rhinos, which are tranquilized and put into an ambulance.

“We are getting more and more requests for help,” Benavides says. “So far we have managed to respond to all of them.”

Some of the orphans have been shot or struck by an ax. Ntombi, a 3-month-old female, had been hacked more than 20 times with a machete. Some are found dehydrated and thin, having gone without food for days.

When the calves arrive at the orphanage, they are placed in a warm shelter with a rubberized floor, where staff members stay with them round the clock. At first, the babies, confused and terrified, charge into walls, bumping their noses. They react to any noise or movement.

It can be a bruising time for the staffers who bed down with them. White rhinos normally weigh about 135 pounds at birth and by six months can weigh about 800 pounds. Fully grown, they can weigh as much as 5,000 pounds, about the same as some SUVs.

“They’re normally still affected by the tranquilizer drugs,” Benavides says. “They just walk around and start calling. If they see any movement, they will charge the walls or the shadows.

“They normally don’t eat at first. We’ll talk to them all the time so they get used to our voices. First of all, you get them to drink milk or to eat. Second of all, you gain their confidence so that you can get close enough to treat any problems that can come up. If they have any wounds, you treat them.”

They soon cuddle into the warmth of their human keepers. Older orphans, like Thandi, are released into the rhino crash, or group, as soon as feasible.

Anti-poaching security forces in the 4.7 million-acre Kruger National Park have become increasingly militarized. Yet even with a dozen heavily armed teams in Kruger at any time, some of them equipped with helicopters, the South African National Parks service is outmanned and often outgunned. The agency is testing hand-launched short-range drones in the hope of tracking and arresting poachers more effectively.

Kruger’s anti-poaching chief, Gen. Johan Jooste, sums up the problem: The park is too vast to police, and it is surrounded by poverty-stricken villages.

“If you go driving through Mozambique, you will see which families are into poaching. They have built villas, they live lifestyles of luxury.”

The young rhinos at the orphanage are taught to follow their human keepers on twice-daily, three-hour walks. Lunga and Faith, two of the calves, raise red dust as they scuffle and play on a bush track, edged with golden grass.

Sometimes the humans have to run behind a tree or clamber up the branches when the rhinos get feisty or nervous. But today they are calm. Traynor sits on the dusty track watching the pair: Lunga ambles up and plops down at her side. Not to be left out, Faith flops down, sandwiching Traynor from the other side.

“When we’re with them, we’re running with them. They’re running and frolicking and doing all kinds of other rhino stuff,” Traynor says.

Returned to their compound, the rhino pair jostle greedily for their midafternoon bottles like chunky, oversize puppies. Sometimes the calves are so eager that they pull off the bottle nipples. They guzzle the sweet liquid in seconds, draining two large bottles in succession. Then they shuffle into a sunny spot and collapse contentedly, sighing, in a mud pond, dozing off as a family of wart hogs scuttles around them.

“My favorite is Kumba,” Traynor says, referring to a rhino who was 6 months old when he was rescued. “I just love him to bits. I have no idea how to explain it. If you are having a bad day, you can just go and sit with him and they just give back a whole lot. Even if you just have that one moment every now and then, it makes it worthwhile.”

When he was small, Traynor slept in his room, caring for him.

“He curled up on my bed. It was like a big dog sleeping at the bottom of your bed. He’d get hungry and come and nibble your arm in the middle of the night.”

Late in the afternoon, Traynor takes buckets of dry food into Kumba’s compound. He approaches, squeaking gently, allowing his Shrek-like ears and face to be scratched. His leathery skin is surprisingly soft and cool. He gazes at Traynor through long eyelashes.

Rhinos have a good sense of smell but poor eyesight, and tragically, poachers easily exploit their weakness. The poachers target females, especially pregnant ones or those with small calves, because they’re slower and more vulnerable.

The hardest times at the Rhino Orphanage are the all-nighters, struggling to save a badly injured or severely emaciated calf.

Most babies that come to the orphanage survive. As they get older, human contact is minimized, before the grown rhinos are sent back to their private game reserves or placed in the safest location that can be found.

South African authorities have relocated rhinos — particularly highly endangered black rhinos — from vulnerable areas to secret locations, even moving them to neighboring countries for protection. But the attacks keep rising, with an average of three rhinos a day killed.

Benavides fears that extinction, at least in the wild, isn’t far away.

“Maybe just the ones that are heavily guarded in small camps will survive, but not free-range rhinos. They will be extinct in the wild. They won’t be easy to see anymore,” says Benavides, whose charity is funded by donors and sponsors. “It’s very frustrating, because you don’t know what you are working towards. You are just trying to save them, but the situation is getting worse and worse by the day and you don’t know what will happen to these babies.”

Rescuing the calves is a costly business, especially for fencing and security, and the number saved at the Rhino Orphanage is dwarfed by the nightly killings of rhinos around the country. After all the love and care, sending them back to live in the bush on a game farm is a sad, frightening moment.

“Like any mom with the empty nest syndrome, you are letting them go to the world and you can’t protect them anymore,” Benavides says. “There’s so much poaching, so you don’t know whether they will be safe.”