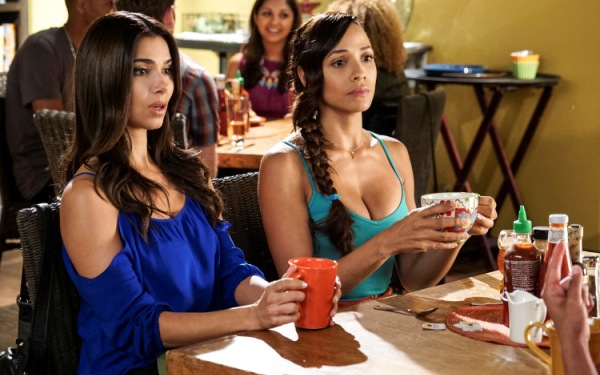 You may know her for her role as Rosie Falta on Lifetime’s “Devious Maids.” Dania Ramirez’s own life is as interesting as that of the character she plays. Her parents left the Dominican Republic to move to the United States for a better life, and she stayed in her home country with her grandmother. They worked to bring her and her siblings to the U.S. legally, and she joined them in New York when she was almost 10. At 16, Ramirez left for college and worked her way through Montclair State University in New Jersey and into an acting career. She had roles in “The Sopranos,” “Heroes” and “Entourage.” Her character on “Devious Maids” is infused with a lot of her mother’s characteristics and struggles. The mother of twins, she is married to director Bev Land.

Q: What were your parents doing in the United States before they sent for you from the Dominican Republic?

A: They came to the country just for a better life, you know? I grew up in a very small town in the Dominican Republic. We didn’t have much, so the families, our parents either came to America or Puerto Rico or Venezuela just to create a better life and future for all of us. My grandmother raised me along with a bunch of my other cousins who are like my sisters.

Q: Was it strange for you when they left, or were you too young to notice?

A: I was 6 months old. So there was a point in my life when I was younger that I didn’t understand why my parents weren’t there. They were always present by making calls and trying to make it back once a year. Once they were established and legal and had a base they could ask for us to get passports to come and join them here. It is a true immigrant story.

Q: Was it strange at first to live with your parents because you really hadn’t for most of your life? Did you think, “I don’t know these people?”

A: (Laughs) It is interesting because when you are from the Dominican Republic, first of all you think America is all of New York. That is where all of my family was living. My grandmother had 12 kids, 10 girls and two boys. I have a big, big family, and a lot of them were in New York City. You have this impression when you are from any Third World country that America is just better. There is more opportunity. So I was excited to come and finally live with my parents. I didn’t realize how different it was until later on when I started noticing my friends here in America and how different their lives were.

Q: Because your parents worked to make your life better, did you feel pressure to succeed?

A: For sure, for sure. When you don’t come from money and nobody in my family was in the business (entertainment industry), you are dealing with people who have given up their lives to make sure that you have a better future. I got into the entertainment world and started modeling when I was 15 so when I told my parents that was what I was going to do for a living, it was very shocking for them. I was very smart in school, I had straight A’s and was going to graduate high school at 16 and start college. My dad wanted me to be a lawyer because I was very opinionated. It was not a career path they understood or one that they thought I could end up having a better future for myself and my family. It was difficult for a number of years. I ended up getting kicked out of my house when I was 16 and I went off to college. When they actually saw that I was getting some kind of stability as far as having a career in this business is when they started coming around.

Q: Do you remember how old you were when you first thought you wanted to entertain?

A: I have always been very outgoing and wanting to entertain, and I didn’t grow up like watching television or anything when I was younger. So when I would watch telenovela at one of my friend’s house, I would go back and re-enact the scene with my sister. I would write songs with my cousins and everybody and put on shows for Christmas when the whole family would get together. I think I have always been sort of entertaining.

Q: Did you go through those lean years where you wondered if you made the right decision?

A: It didn’t matter to me how hard it got. It did get hard. I used to have a journal, and I remember — I was on my own and had made this decision to do this for a living — I was taking every job that I could. I took my classes, and I started studying at the Actors Workshop Studio in New York City. I was sort of like waitressing or whatever I could do. I did music videos, anything I could. I saw everything as a part of my journey. I really didn’t know what the business was, so everything felt like a big break to me. (laughing) I did “Subway Stories,” which was this little miniseries they did on HBO, and I was a featured extra. I remember thinking, “Oh my god, he’s a director and he’s talking to me.” It felt like I was a star.

Q: I know your children are really young, but do you worry about them growing up in a privileged environment?

A: They are 16 months old. We keep it very humble at the house. It’s undeniable, of course. You want to give your children better than what you had and make them feel like they have everything. But I think there is also a lot of value in making them work for things and allowing them to see other places. My grandmother still lives in that small town in the Dominican Republic where I grew up without running water or electricity. There is an aspect to life that I don’t ever want them not to see. It just makes you a better human being and gives you a wider perspective and understanding of life.

Q: Explain how the show “Devious Maids” does not play into stereotype.

A: I think it is about really creating these three-dimensional characters. The show is about these women, not what they do. It’s about the friendships, the relationships, the struggle. It’s about really, the American dream. Rosie is dealing with immigration and having to leave her child behind, which is something I really related to because that is how I felt. I was playing it from my mother’s perspective and how hard that must have been for her. I think we have tapped into telling these real human stories rather than (just) a Latin story. That is when stereotypes happen when you are separating a culture and putting them into a box. That is something “Devious Maids” does not do.

Q: How does your mother like the show, because she lived a lot of what is being portrayed?

A: She loves the show! (laughing) You know it is great because I do have a family full of women, so they get to just sit back and watch — not just watch me — but find moments where they can relate in some kind of way. There is a lot of my mother sometimes in Rosie. I think for her it is really funny to watch.