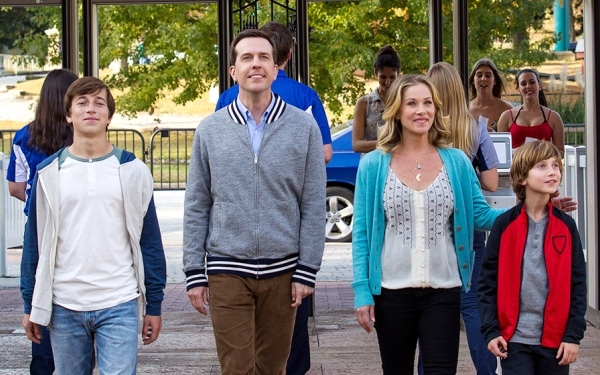 Vacation isn’t exactly a remake of National Lampoon’s Vacation (1983), because it exists in a world in which the events depicted in the earlier movie already happened. But it doesn’t function like a sequel, either, because all the actors are different, with the exception of Chevy Chase and Beverly D’Angelo, who appear briefly.

Think of the new movie as the re-tailoring of an old formula for a new generation, taking the best of the old and combining it with the best of the new. The cute family setup is there, but in place of the gentler ’80S sensibility, we get something harsh, nasty and very funny. Vacation is consistently funny from beginning to end, a piling on of dumb but inventive jokes and excruciating, awkward situations.

In place of Chevy Chase in the driver’s seat, we get Ed Helms as Rusty, who still remembers the wonderful vacation he went on with his family back in the 1980s. Like Dad, Rusty is an oblivious sort of a guy, who means well and wants his family to be happy. But where Chase’s quality was satiric, Helms’ is more neurotic, so that the marriage in Vacation really does seem in trouble. It’s hard to see what his wife (Christina Applegate) could possibly see in Rusty, who is needy, relentlessly chipper and does everything wrong.

We know we’re in good comic hands from the first minutes, when we see Rusty in his job as a pilot for a budget carrier. In that breezy, all-American style that airline captains invariably master, he thanks the passengers for flying “Econo-Air — we’re working hard to regain your trust.” This is followed by a sequence in which the elderly co-pilot, who has dementia, takes the plane up to 60,000 feet. You were warned. John Francis Daley and Jonathan M. Goldstein, who shared writing and directing duties, are merciless in pursuit of a laugh.

Wanting to re-create a golden moment from his childhood, and thinking it will bring closer a family that he senses is fragmenting, Rusty rents an Albanian car (the car is a source for laughs in itself) and insists on taking a family road trip to Walley World, an amusement park on the other side of the country. The rest of the film is just a succession of scenes in which the family stops somewhere and something ghastly happens.

Vacation is not one of those comedies in which all the best jokes were in the coming attractions trailer. Viewers who saw the trailer, for example, might know that the Rusty and the family bathe in raw sewage, thinking they’re at a hot springs. But the joke immediately before that is just as funny, and the sequence right after that — in which Rusty visits his sister (Leslie Mann) and husband (Chris Hemsworth) — is at least as good.

Helms is particularly interesting here, in that he’s funny and yet really does make Rusty seem like a fellow with serious emotional problems. Applegate serves essentially as Helms’ straight man, and her timing is first rate. A running gag, in which the tiny younger brother (Steele Stebbins) beats up on and terrorizes the sweet-natured older brother (Skyler Gisondo), brings the kids out from the periphery in a good way. As for Chase and D’Angelo, they don’t do much, but it’s nice to see them.

Near the finish, there’s an attempt to inject some sentiment, perhaps as a nod to National Lampoon’s Vacation, but it’s an empty gesture, and in a movie like this, the emptier the better. We know it; the filmmakers know it, and they know that we know, and we know that they know: When a family is in trouble, a vacation from hell never helps.

Enter to win a Vacation prize pack.
Enter the Sweepstakes