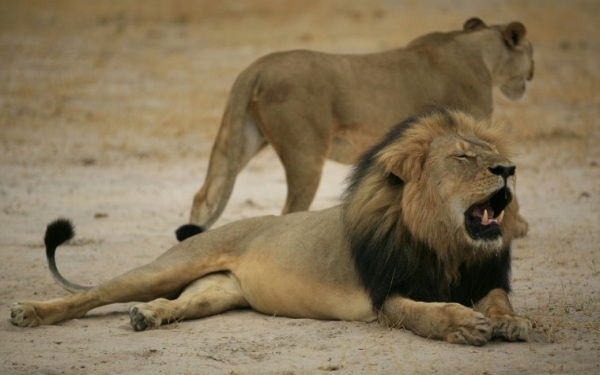 MINNEAPOLIS — A big-game hunter from Minnesota acknowledged Tuesday that he killed a beloved lion in Zimbabwe with a bow and arrow, but said he regrets what he did and believed that his guides were leading him on a legal hunt.

Walter J. Palmer, 55, of Eden Prairie, a practicing dentist, issued a statement addressing the killing on July 1 of Cecil, which has sparked outrage around the globe.

“I hired several professional guides, and they secured all proper permits,” the statement read. “To my knowledge, everything about this trip was legal and properly handled and conducted.

“I had no idea that the lion I took was a known, local favorite, was collared and part of a study until the end of the hunt. I relied on the expertise of my local professional guides to ensure a legal hunt.”

Palmer, who has on his record a conviction for poaching a bear in Wisconsin several years ago, said he has not been contacted by any authorities in Zimbabwe or the U.S. about his killing the lion, but added he will cooperate with investigators.

“Again, I deeply regret that my pursuit of an activity I love and practice responsibly and legally resulted in the taking of this lion,” the statement concluded.

Earlier Tuesday, the London Telegraph exposed him as the hunter who took down Cecil the lion, paying more than $54,000 for the opportunity. The Telegraph said Cecil was lured out of Hwange National Park.

The newspaper posted several photos that it said are of Palmer on hunts, one of him shirtless and clutching a leopard that had been killed in 2010.

In Zimbabwe, a police spokeswoman, Charity Charamba, said, “We are looking for Palmer.”

Palmer’s dentist office in Bloomington was closed Tuesday, apparently abruptly. One client showed up for his appointment unaware of the global turmoil surrounding his dentist.

Palmer’s profile on his business’ website said he is from North Dakota and graduated from the University of Minnesota dental school. He and his wife live in Eden Prairie, about 2 1/2 miles from his practice. They have two children. A knock at the door Tuesday brought no response. A neighbor described the Palmers as very private.

As the Telegraph’s report and subsequent news coverage spread on the Internet, commenters took to the Facebook page of Palmer’s River Bluff Dental with a vengeance.

“You utter utter scum,” one of many hostile comments read. “You should be in jail, and you should hang your head in shame.”

Zimbabwean wildlife authorities say two men will appear in court for allegedly killing the well-known lion, whose death is seen as a blow to Zimbabwe’s tourism.

The Zimbabwe National Parks and Wildlife Authority and the Safari Operators Association said Tuesday that a local professional hunter and a farm owner are facing poaching charges and expected in court Wednesday. The statement did not address any legal consequences for Palmer.

The joint statement said Theo Bronkhorst, a professional guide with Bushman Safaris, is believed to have lured the lion to Honest Trymore Ndlovu’s farm, where it was killed by an American tourist in Zimbabwe’s western Hwange region. Its carcass was discovered days later by trackers, the statement said.

During a nighttime pursuit, the hunters tied a dead animal to their car to lure the lion out of a national park, said Johnny Rodrigues, chairman of the Zimbabwe Conservation Task Force. Palmer shot it with a bow and arrow, injuring the animal. The wounded lion was found 40 hours later and shot dead with a gun, Rodrigues said in the statement.

The lion was skinned and beheaded. The hunters tried to destroy the lion’s collar, fitted with a tracking device, but failed, the statement said.

“The saddest part of all is that now that Cecil is dead, the next lion in the hierarchy, Jericho, will most likely kill all Cecil’s cubs,” Rodrigues said.

The conservation group said Cecil, recognizable by his black mane, was part of an Oxford University research program. Tourists regularly spotted his characteristic mane in the park over the past 13 years, said Lion Aid, also a conservation group.

In 2008, Palmer pleaded guilty in federal court in Wisconsin to misleading a federal agent in connection with the hunting of a black bear. Two years earlier, Palmer killed a bear near Phillips, in Price County. That location was 40 miles outside where he held a permit to hunt bear.

Palmer and others transported the bear carcass to a registration station inside the allowed hunting zone. At the station, he falsely certified that the bear had been killed in the legal zone. He then brought the bear to Minnesota.

Twice, a U.S. Fish and Wildlife Service agent interviewed Palmer, who said he believed he killed the bear legally.

Facing a maximum penalty of five years in prison, Palmer was sentenced to one year’s probation and fined nearly $3,000.

Palmer is listed by the Safari Club International, a hunting organization that promotes trophy hunting and claims 55,000 members worldwide. SCI keeps a detailed record book in which members display photos, measurements and other information about animals they have killed. Palmer lists 43 kills, all by bow and arrow. The earliest records for Palmer note he killed two Caribou in Newfoundland. His list includes moose, deer, buffalo, a polar bear and mountain lion.

A photo posted in the record book from 2005 shows him kneeling behind a lion, with his bow propped up against the animal. The book also documents with a photo that he shot an African elephant in Zimbabwe in 2013.

In a 2009 New York Times report from Northern California, where Palmer was hunting elk, he told the newspaper that he can hit a playing card from 100 yards with his compound bow and eschews bringing a firearm as a backup. He told the Times that he’s killed all but one of the animals registered by Pope and Young, a leading recorder of trophy kills.

“I don’t have a golf game,” he said, illustrating his devotion to hunting, adding that he learned to shoot at age 5.