Escape the Mundane: With Animatronics 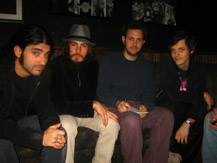 “For me, music is about meditation and forgetting about everything that's troubling you, stepping out of the every day bullshit for a minute. Performing is like that and when I go to a good show I definitely feel like that. It's like a high, an escape, taking a drug,” reflects Jeff Ramuno, guitarist and sometime vocalist for Animatronics.

Indeed, an Animatronics set has the ability to transport you to another mindset by immersing your eardrums in many rich textures of sound all at once. Along with fellow guitarist Amir Eshraghi, bassist Adam Yasmin and drummer Daniel Yasmin, Ramuno strives to not only entertain but provide a new and unique experience to an audience.

The band not only relies on conventional instruments to create the various sounds in its songs, but incorporates just about anything they can to mix things up. Ramuno states, “I just think it's really interesting when bands try and reach out. Even the guitar can be so overused. We like to change up instruments while we play, we like to switch off. Amir is obsessed with collecting little toys and stuff he can use in our performing somehow.”

Each of the members have spent years playing their respective instruments and have been a part of a couple previous projects, but it seems that they were all destined to form Animatronics one day. Ramuno has been friends with the Yasmin brothers for years and started collaborating with Eshraghi about a year-and-a-half ago.

Ramuno recalls, “I was trying to start a band like this where it's based a lot on improv. Amir had just broken up with his band – we were just doing soundscapes, just a lot of effects. Adam was playing percussion with us and Daniel the drummer was visiting from New York.

Two years before that when I went to visit New York, he [Daniel] and I were having a conversation about starting a band. I just thought it was something like people say that shit all of the time, but then he came back and jammed with us once and it was really good. Like a week later when he went back to New York, we got a call from him and he was like I'm moving back. He came back and we just started playing the second he got home.”

Since then, the quartet has played pretty much every venue that would have them from Santa Barbara, Hollywood and in its home base – the San Fernando Valley.

The band draws from a wide variety of influences including King Crimson, Hella, Battle, John Frusciante, dredg, various jazz, classic rock and even classical and hip-hop artists to create an ambient, psychedelic sound all its own. Basically its members find a common ground in not having a common ground.

Most of its songs stem from the improvised jam sessions that the band began with, but some of its newer tunes are coming from compositions that one member will bring to the table and the rest will add on to.

Being an instrumental rock band definitely sets Animatronics apart from other groups on the scene and Ramuno admits it has both positives and negatives. “The common person is going to respond to vocals a lot more than just an instrumental band so it's about finding people that are into that kind of stuff. We actually do have some vocals and we're working on having some more of those, but it's also really cool just to see when people actually area feeling instrumental music.

“Not that many people set out to make an instrumental band, but when people like they really like it because they respect the fact that you're not just making some shitty pop music or something.”

Animatronics will perform April 30 at the Unknown Theatre, in Los Angeles. For more information, visit animatronicsounds.com.