$75,000 in rewards offered to catch operators who flew drones above fires 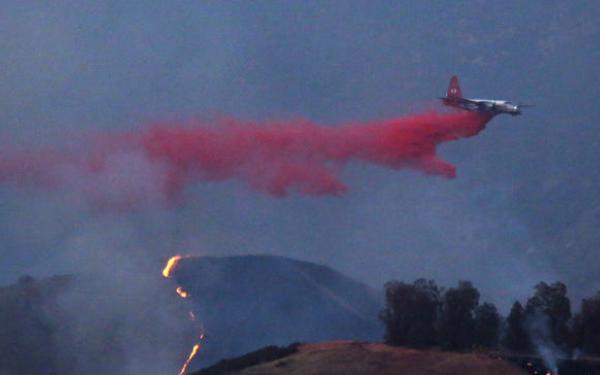 San Bernardino County supervisors unanimously agreed Tuesday to offer $75,000 in rewards for help in tracking down drone operators who interfered with firefighters during three major wildfires this summer.

After the unmanned devices were spotted flying above flames and smoke from the blazes this year — which altogether burned about 36,000 acres — fire crews were forced to ground water-dropping aircraft. Officials said the delays allowed the fires to spread, resulting in devastating property losses.

The five-member board hopes that by offering the rewards — $25,000 for each fire that saw interruptions by drones — investigators can get tips to identify the drone operators and prosecute them.

“This type of activity is not going to be tolerated when first responders are trying to put out fires that drastically affect the constituents of San Bernardino County,” said Board of Supervisors Chairman James Ramos.

None of the drone operators has been identified. The reward will allow county officials to launch a hotline to collect information about suspected drone operators, Ramos said.

Drones first became a problem in the county during the Lake fire, which ignited June 17 and burned through more than 31,000 acres of wildlands in the San Bernardino National Forest and nearby San Gorgonio Wilderness.

Low-flying aircraft were preparing to drop fire retardant over flames in the Barton Flats area when a 3- to 4-foot drone was seen buzzing between two planes. Fire officials immediately grounded the aircraft. Fire officials later saw a second drone in the area.

On July 12 — the first day of the Mill 2 fire — officials had to briefly suspend a tanker after a drone was spotted flying over Mill Creek Canyon near California 38.

And for about 25 minutes, officials had to halt tankers over the July 17 North fire, which jumped Interstate 15 near California 138 and destroyed dozens of vehicles, U.S. Forest Service officials said.

Drones pose a major risk to firefighters, pilots and aircraft, officials say. A collision between a drone and aircraft flying at low altitude could result in major damage and potentially injure the pilot and crew on board.

U.S. Forest Service officials said they will continue to stop helicopters and air tankers from dropping fire retardant over a fire until they can confirm the devices have left the area.

New legislation, if passed, could allow firefighters and law enforcement to take down any drones hindering emergency operations.

The proposed law, introduced by Assemblyman Mike Gatto (D-Glendale) and state Sen. Ted Gaines (R-El Dorado), would give firefighters and other first responders immunity if they damage drones interfering during a fire or other emergency.

Another piece of legislation would make it a misdemeanor to fly a drone over a forest fire. Drone operators could face up to $2,000 in fines.

U.S. Rep. Paul Cook (R-Apple Valley) has introduced a law that would ban drone operators from flying over a forest fire, making it a federal offense. Anyone convicted of interfering with fire operations could face a fine and up to five years in prison.

Mother arrested in shooting death of son, 17, at Rosemead hotel