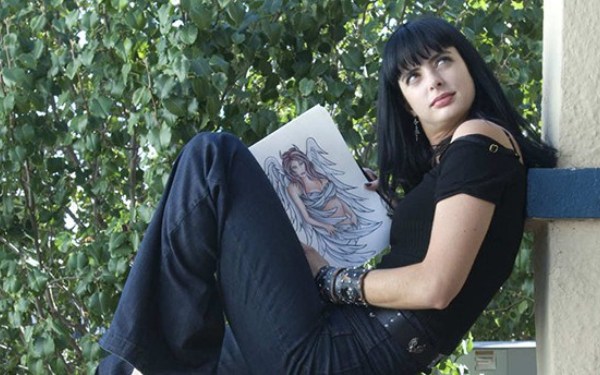 Krysten Ritter, in a scene from "Breaking Bad," will play Jessica Jones in the Netflix series.
(Credit: AMC)

Little was known about the highly anticipated female-lead new Marvel Netflix series "Jessica Jones" until yesterday at the TCAs. The hotly anticipated comic adaptation could prove to be Marvel's trickiest translation, as the source material grapples with some pretty serious trauma. Compared to the Marvel Cinematic Universe, "Jessica Jones" could be the hardest hitting series yet, if Netflix and Marvel can capture the esseence of the original comic. And here's what we learned.

“Jessica Jones” showrunner Melissa Rosenberg and “Daredevil” first-season showrunner Steven DeKnight joined a panel of Netflix’s current (and new) showrunners, including Gaz Alazraki from "Club de Cuervos," Marta Kauffman from "Grace and Frankie," Michael Showalter from "Wet Hot American Summer: First Day of Camp," Raphael Bob-Waksberg of “BoJack Horseman," and Glenn Kessler from "Bloodline," on stage at the Beverly Hilton for the Television Critics Assn. Summer Press Tour. Rosenberg spoke about the challenges and themes she will be exploring in the new series.

The “Jessica Jones” series is based on the Marvel comic “Alias” (no relation to the TV series) written by Brian Michael Bendis. The comic follows small-time costumed vigilante Jewel, real name Jessica Jones (played by Krysten Ritter), who hangs up her cape to become a private investigator. Jones battles a variety of issues, including post-traumatic stress, along with a string of superheroes that keep showing up and asking for her help. “Alias” was Marvel’s first “max” comic (R-rated) and if the TV series stays true to the comic, it will explore a lot of material the lighter Marvel movies have continued to skirt.

But will the series take a page from the already fairly violent Marvel Netflix series “Daredevil?" Rosenberg addressed this question on the panel. "'Jessica Jones’ is a very different show from ‘Daredevil,’” Rosenberg said. “We exist in a cinematic universe. The mythology of the universe is connected, but it will look very different. Tonally they’re very different. If you pick up Bendis’ ‘Alias’ and pick up ‘Daredevil,’ they’re wildly different. That was my one concern. Would I have to fit in with ‘Daredevil?’ The answer was, ‘No, we’re hiring you for your point of view.’”

Rosenberg noted the advantage the devil from Hell’s Kitchen has over her Jessica Jones: "[DeKnight’s] show is called 'Daredevil,' but Daredevil has an outfit.” said Rosenberg. “He has a mask. So Charlie Cox can get a break every once in a while.  My show is called ‘Jessica Jones.’ There's no mask. Krysten Ritter is the hardest working woman in show business.”

Also addressed in this panel: how Marvel plans on linking all of these new Netflix series together. In the comics, Jessica Jones and Matt Murdock (Daredevil) are part of a larger team of superheroes called the Defenders. The rest of the group includes the yet-to-be revealed Iron Fist and “Jessica Jones” love interest Luke Cage (who will be played by Mike Colter). Each of these supers will also eventually get their own standalone series -- the Luke Cage series already has a showrunner, Cheo Hodari Coker. But how are they planning on staggering all of these connecting series?

Netflix president Ted Sarandos explained. “I think ideally there will be a rhythm of, about every six months, you'll get a new season or a new series from the ‘Defender’ group,” said Sarandos. “And then they will cross over, do a combined season, once we've launched the first season of each of the four characters. And some will selectively have multiple seasons... The cadence of it, though, we believe, will probably be about two launches a year.”

And what about the recently announced Punisher addition to "Daredevil" -- will actor Jon Bernthal get his own series too? “Today it’s contemplated to be that the ‘Defenders’ are the four characters,” said Sarandos. “But it is possible, for sure. That is the beauty of the Marvel universe. Any of [the characters with a series on Netflix] can spin out into films, too.”

The 13-episode ”Jessica Jones" series will debut by the end of the year.

'Orange Is the New Black' cast members on their lake dive, hopes for new season