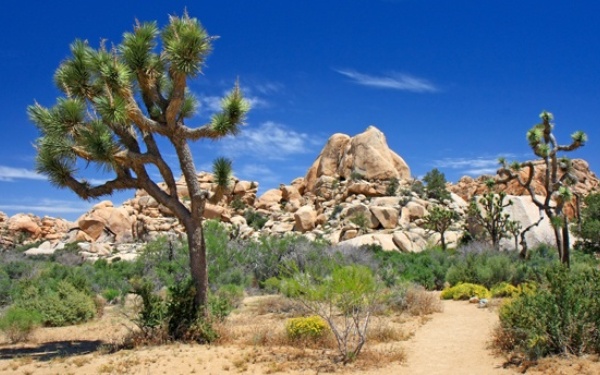 Joshua Tree National Park and three others in California are among the most air polluted in the nation, a study released Tuesday said.

The other three affected parks are Sequoia, Kings Canyon and Yosemite, according to the National Parks Conservation Association.

Of the 48 national park sites analyzed, the only ones that earned an “F” grade for polluted air were those four parks, the NPCA study said.

“This air pollution is unhealthy for most park visitors and rangers and also heavily hampers visibility in the parks. Scenic views and clean air are treasured by park visitors,” according to the report.

The approximately 30 days annually of unhealthy air in Joshua Tree National Park is due to ozone.

“Ozone does not come out of the tailpipe,” Sabala said.

But the pollutants that do come out, reactive with heat, to form the unhealthful ozone,” he said.

Despite being “downwind of LA,” Sabala said that the air situation JTNP is stable to improving, due to the proliferation of more fuel-efficient vehicles and the increasing number of hybrid vehicles on the road.

The NPCS study estimates it will take until 2106 to reach natural visibility at Joshua Tree at projected pollution cleanup rates.

“We can do better than that,” said Stephanie Kodish, clean air program director for the NPCA.

“With four national parks in California amongst the dirtiest in the country and projections showing it may take more than a century to clean the air in these parks, it’s clear we need a different strategy,” said Ron Sundergill, senior director of the NPCA’s Pacific regional office.

The association says that the situation is “one of those rare problems with a simple solution.”

With a stroke of pen, the president can close loopholes to make ensure that states and the Environmental Protection Agency are poised to restore the air in national parks, the NPCA says.

The Obama Administration is expected to revise the Regional Haze Rule before end of its term.

NPCA analysis recommends that changes must include setting park-centered targets for reducing pollution impacting parks for the next decade, as well as closing loopholes that allow some polluters to escape the rule’s requirements and greater accountability for states to reduce pollution within their borders.

“As the decades have passed, I’ve noticed a gradual improvement in air quality in the region, but we can do more by finding market-based strategies,” he said.

“We do need clean air, but preservation also means preventing people from intentionally ruining our natural treasures,” he said.

“That’s why I recently introduced The Protecting Our National Parks Act. There is no law explicitly against vandalism on National Park Service land.” he said.

“This year alone, vandalism has struck Joshua Tree, Yosemite, and Death Valley National Parks in California, Canyonlands and Zion National Park in Utah, and Crater Lake National Park in Oregon. My bill will hold these perpetrators accountable,” Cook said, in a statement.