Fire fast, quit young: not all fun and games for e-sports pros 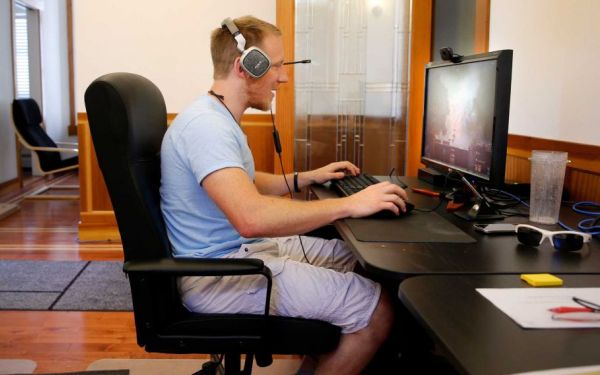 Bryce "Machine" Bates was one of the top StarCraft2 players and esports personalities in the U.S. He retired two years ago and now lives in Berkeley, Calif. working for the GoodGame Agency.
(Credit: Brant Ward / The Chronicle)

When Bryce “Machine” Bates became a professional video game player at age 18, he knew his career would be short.

At 19, he ranked among the top “StarCraft” players in the United States. By the time he was 25, the grueling, eye-glazing, hand-cramping 12-hour video game sessions had started to add up.

Realizing that his reaction times were slipping, Bates retired at an age when many are just starting their careers.

“My mechanics weren’t what they used to be when I was younger,” said Bates, now 27 and living in Berkeley. The decline was “very slight,” he said. “It’s just something that happens with time.”

Bates’ story is the norm in the booming field of electronic sports, known as e-sports, where the top players compete for million-dollar purses in tournaments that attract more viewers online than TV broadcasts of NBA Finals or World Series games.

Chasing money, fame or the simple joy of playing video games all day, more young people are pursuing their dream of going pro. But few realize how short that dream career will be — or the physical and emotional tax they will pay to reach it.

Players regularly endure marathon gaming sessions to train their eyes, fingers and thumbs to react quicker — and smarter — than their onscreen opponents. And even then, “plenty of players put in thousands of hours and still are nowhere as good as the top pros,” said former “Halo” star David “Walshy” Walsh, who retired at the ripe old e-sports age of 27.

It’s no surprise major e-sports contests are sponsored by ultra-caffeinated energy drinks like Red Bull and Monster. Nor is it a surprise that with the stakes growing — last year’s “Dota 2” world championship filled Seattle’s KeyArena and offered a $10.9 million purse — the industry is now grappling with a doping scandal involving reports of widespread Adderall use.

Pros are expected to spend their waking hours — and some when they aren’t awake — honing their skills.

“My ex-girlfriend said I would talk in my sleep,” Walsh said. She once awoke when Walsh yelled, “Rockets coming up in 15 seconds!”

E-sports is a young person’s endeavor — the average age range for competitive gamers is 18 to 25, according to SuperData Research, a New York firm that specializes in the video game industry.

“Being young is helpful — you simply have more time to dedicate to it,” said Dennis “Thresh” Fong, who was 22 when he retired from competitive “Doom” and “Quake” matches.

“When most people hit their 30s, they have families, they have kids and it’s harder to dedicate 12 hours or 16 hours a day practicing playing games,” said Fong, 38, now the CEO of Mountain View PC gaming services company Raptr.

As with athletic sports, injuries can shorten careers. In April, 22-year-old Hai Lam, who captained the popular “League of Legends” team Cloud9, surprised the gaming world when he suddenly retired due to a repetitive strain injury to his wrist.

Disney is using a similar story line in a bid to capitalize on the popularity of e-sports among teens. “Gamer’s Guide to Pretty Much Everything,” a live-action sitcom that premiered on Disney XD last Wednesday, tells the story of a 15-year-old gaming superstar who returns to high school after a dislocated thumb forces him to retire.

Professional athletes generally have short careers — the average baseball, basketball, football and hockey career lasts only 3.5 years, according to the Ram Financial Group. Studies have found athletes reach their physical peak at 26, although competitors in some sports, such as swimming, top out at 21.

In e-sports, physical response times peak at 24 and then decline, according to a study of 3,305 “StarCraft 2” players published in 2014 by researchers at Canada’s Simon Fraser University.

After age 24, reaction times dropped by 15 percent over the next 15 years, meaning a 39-year-old player reacts 150 milliseconds slower than a 24-year-old. That adds up to 30 seconds lost during a typical 15-minute game, “a long time in a game of speed such as ‘StarCraft 2,’” the researchers said.

Although the study centered on gamers, the researchers also suggested that everybody’s cognitive-motor skills start to go “over the hill” after age 24.

People who aren’t familiar with e-sports wouldn’t notice the missed milliseconds, and likely won’t view sitting in front of a computer or TV screen for hours playing a video game as physically dangerous or mentally stressful.

Yet retired e-sports pros interviewed for this story say otherwise, because the pressure mounts when gaming becomes a job. And the mental and physical rigors of getting to the top and staying there are as demanding as any athletic endeavor, they say.

“There are times where your eyes glaze over and you really just want to take a break and go work out, read a book, watch a TV show,” Bates said. “Sometimes it can be physically demanding as far as hand cramps, numbness in fingers and hands, weakness in fingers, but usually only after months or years of playing that long.”

Johnathan “Fatal1ty” Wendel, a “Quake” star who retired at 25, said playing can be “a very draining activity, just like playing (physical) sports, using your brain and being alert at every second of every moment.”

The Missouri native, now 34, dropped out of school when he decided to become a full-time pro at 18. He tapped into the competitive nature that made him the captain of his high school tennis team, practicing “Quake” at least 10 hours a day. After 18 months of training — some days lasting as long as 17 hours — he was “kind of burned out.”

“Professional athletes are the same way,” he said. “All they do is train and work.”

That training continues even for gamers in the highest echelons of e-sports. Whenever video game makers issue a new title, pros must study new maps, adopt new strategies and familiarize themselves with new characters.

“Two or three years later, you have to learn a brand-new game,” said Walsh, who retired in 2012.

To stay competitive, he practiced 40 to 60 hours a week, often in nonstop sessions. But all the time he spent pursuing his avocation exacted a personal cost.

“I didn’t get to spend as much time with my friends or my family during those times as I wanted,” he said. “I did miss out on birthday parties. I wouldn’t say I regret it, but you do get to that point where I was happy I didn’t have to put every single night of the week into gaming.”

By e-sports standards, Walsh had a successful career. He was the first “Halo” superstar for the e-sports organization Major League Gaming, garnering sponsorships including a $1 million deal with Dr Pepper. He took home a total of $155,000 in tournament prizes, according to e-Sports Earnings, which tracks winnings.

He still makes a decent living in e-sports. Like an athlete-turned-TV analyst, he travels the world as a commentator on “Halo” tournament live streams, which are viewed by millions of fans. And he has more than 33,000 followers — some of whom pay $4.99 per month to subscribe — of his own channel on Twitch, a video game streaming website.

But few e-sports players earn enough to live the rest of their lives on their winnings, said Joost van Dreunen, CEO of the firm SuperData Research. They might make $40,000 to $50,000 a year — maybe up to $70,000 if they have a corporate sponsor.

Bates became the “Machine” partly because he worked part time at his father’s machine shop, but also because of the hand-eye mechanics he used to dispatch opponents in the science-fiction strategy game “StarCraft.”

However, his best finish was only fourth place, playing “StarCraft: Brood War” in the 2008 World Cyber Games USA.

“I wasn’t like a phenomenal, amazing player. I had a few good runs, but for the most part, I was high-end to mediocre by North American standards,” he said.

That didn’t add up to great personal wealth. According to e-Sports Earnings, Bates earned about $2,389 during his career in tournament play. In 2009, he joined Evil Geniuses, an e-sports team and marketing organization with sponsors like the Monster Energy drink, to lead a team of “StarCraft” players.

“The money wasn’t great, but housing was provided, and that made things very easy,” he said.

When he decided to hang up his controller, Bates took an administrative job that isn’t as exciting as competitive gaming. He now manages shipping and other logistics at Evil Geniuses homes — crash pads in Berkeley and Alameda where pro players live and train. He also appears in online ads for team sponsors.

“It’s a tough game to play competitively, and I did it close to six years,” he said. “I just wanted to branch out and do something different for a while.”

Other e-sports retirees also found a way to stay in the game after they stopped competing.

Fong made headlines as a teenager in the mid-1990s when he won $10,000 in the first international “Doom” tournament — and a red Ferrari in a 1997 tournament.

His gaming fame helped him co-found several industry-related startups, including Xfire, an online tool for PC gamers that Viacom bought for $110 million in 2006. His current company, Raptr, recently closed a $14 million round of financing to help expand a service for recording and sharing gaming video that Fong described as “Instagram for gamers.”

Wendel, who won about $456,000 competing in the e-sports Cyberathlete Professional League, now is CEO of Fatal1ty Gaming Gear, a Las Vegas company that sells motherboards, sound cards and other equipment. He said the company has sold more than $100 million in equipment since it started.

Though some have turned their gaming fame into startup cachet, such lucrative second careers are no guarantee — even for well-known players.

Bates said budding e-sports pros should consider whether it’s worth it to play.

“I would stress to kids who are considering gaming as a profession that you have to understand what you’re getting yourself into,” Bates said. “Either you have to commit to it 100 percent or you could end up not being as much of a success as you anticipated.”