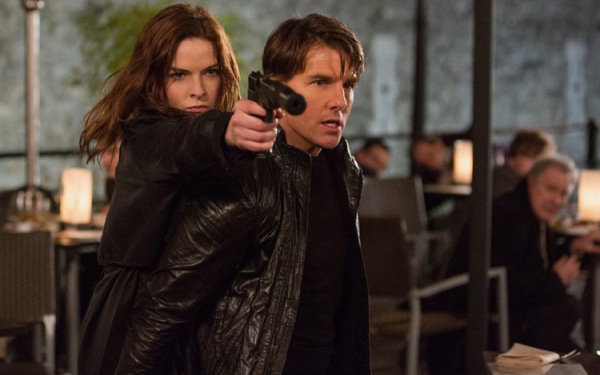 Each one of producer/star Tom Cruise’s “Mission: Impossible” movies has boasted a distinctive director.

The 1996 starter, which introduced Cruise’s Ethan Hunt as the new head of the ultrasecret Impossible Missions Force from the 1960s TV spy series, was made by suspense auteur Brian De Palma. Cruise tapped Hong Kong crime film stylist John Woo for 2000’s “M:I II.” Television superproducer and upcoming “Star Wars: Episode VII” helmer J.J. Abrams made his feature-directing debut with “M:I III” in 2006. And Brad Bird jumped from such animated hits as “The Incredibles” and “Ratatouille” to live action with “Mission: Impossible — Ghost Protocol” in 2011.

Now Christopher McQuarrie has taken the directing reins for the fifth globe-trotting “M:I” superproduction, “Rogue Nation.” He came to the production, for which he also has screenplay and co-story credits, with an Oscar for writing the intricate 1995 mystery “The Usual Suspects” and directing experience on two decidedly smaller projects, “The Way of the Gun” and the Cruise-starring “Jack Reacher.”

“They obviously didn’t have the sprawl that something like a ‘Mission: Impossible’ does,” McQuarrie understates. “But believe it or not, this wasn’t that intimidating. I’ve had a lot of dry runs at it in my capacity as a producer and a writer on other movies, like ‘Edge of Tomorrow,’ ‘Valkyrie’ and I worked on ‘Ghost Protocol’ for a little bit. So I had a pretty good sense of what I was getting into — or thought I did. Nothing can truly prepare you for taking on the writing and directing of a movie like this.”

Like “Suspects” and “Valkyrie,” “Rogue Nation’s” scenario is packed with twists and turns as Hunt tries to stop The Syndicate, a group of rogue secret agents bent on pulling off complex, spectacular crimes.

That’s typical of both McQuarrie stories and, as he’s quick to point out, “Mission: Impossible” movies. But there’s another prominent theme that makes “Rogue Nation” distinctively McQuarrie’s film.

“It’s about trust,” he notes. “Ultimately, what these movies come down to are story and character. As much as we want to push the action envelope, none of that really matters unless we have characters you really care about. That whole notion of trust and mistrust created a really great sense of pressure on the movie.”

In “Rogue,” the IMF is still suffering the fallout from the Kremlin’s destruction in “Ghost Protocol.” It’s been officially disbanded, with overbearing CIA chief Hunley (Alec Baldwin) ordering Washington, D.C.-based members William Brandt (Jeremy Renner) and Benji Dunn (Simon Pegg) around while Hunt is sneaking around Europe. When he’s captured by The Syndicate, one of its members, Ilsa Faust (Swedish actress Rebecca Ferguson), helps Hunt escape. An adept fighter as well as an effective femme fatale, she repeatedly reappears to aid and hinder Hunt’s efforts as Dunn, Brandt and original IMFer Luther Stickell (Ving Rhames) join him, all bringing conflicting ideas about how to proceed with them.

Keeping all that conflict, plus endless plot reversals, straight was one thing. However, there are also those big-scale action sequences that “M:I” is noted for that posed a bit of a directing challenge, too.

Take the opening sequence, which has been widely promoted. As is his habit, 53-year-old Cruise insisted on performing the stunt himself, clinging to the side of an A400 cargo plane as it takes off. Cruise was harnessed to the plane, but that was about the only safety measure that could be taken — for eight takes.

“The thing to remember is, as with a lot of action sequences, you’re looking at the perceived danger, we’re looking at the real danger,” McQuarrie explains. “The perceived danger is Tom falling off the plane, which was highly unlikely. He could have been torn off the plane if it went too fast, but he wasn’t going to fall. What was more dangerous was debris on the runway; even a small rock would become a projectile at that speed. And the most dangerous thing was birds. A bird strike would’ve been fatal.

“So, while everyone else was looking at the ground, all I looked at while I was watching the monitor was I was just waiting for a pigeon to end the whole show.”

Then there’s the multiple-shooter assassination attempt at Vienna’s State Opera House while a sold-out performance of “Turandot” is in progress. The production only got one night to shoot in and on top of the elaborate theater (a second unit filmed the whole Puccini opera there). A giant working set of the backstage area, with parts of the stage and audience section, was built to the shoot’s specifications at Leavesden Studios in England.

“The back of the actual Vienna Opera is not exactly like that,” McQuarrie reveals. “We built all of the rafters and everything in one set so you could have 360 degree geography no matter where you looked. All of the fight actually happened 60 feet above that set. It was the most complicated sequence of the movie, more complicated than the A400, the motorcycle chase or the underwater sequences.”

It’s already being compared to Alfred Hitchcock’s classic Albert Hall shooting set piece from the 1956 film “The Man Who Knew Too Much.” McQuarrie swears that that’s one of the few Hitchcock movies he hadn’t seen, or at least hadn’t before making “Rogue Nation.” The inspiration, he says, was Martin Scorsese’s 10-minute Freixenet Cava commercial/Hitch homage “The Key to Reserva.”

And what was that he said about an underwater sequence? At one point Hunt has to free dive into a Moroccan energy-generating apparatus called a Torus. Filmed partially in a Leavesden tank, it’s one of the few sequences in the live-action obsessed “M:I” series to rely on digital extensions for its visual effects.

But that does not mean real jeopardy was absent.

“The scariest part of the sequence was not the shooting, but the warm-up,” McQuarrie notes. “At the beginning of the day, Tom would go into the tank and sink to the bottom. We’d watch him through this glass wall just laying at the bottom of the pool, holding his breath, for six minutes. Disturbing.”

All that and more required, well, trust. And the superstar’s confidence in his favorite writer is what makes “Rogue Nation” both a McQuarrie film and another “Mission: Impossible.”

“Tom tends to create story from a place of pure emotion,” the director observes. “He wants the audience to feel this or experience that, then asks you how you would do it. You’re free to play in that space, trying to hit that emotional target. And that’s one of the reasons why these movies all have a strange continuity beside being, also, radically different.”