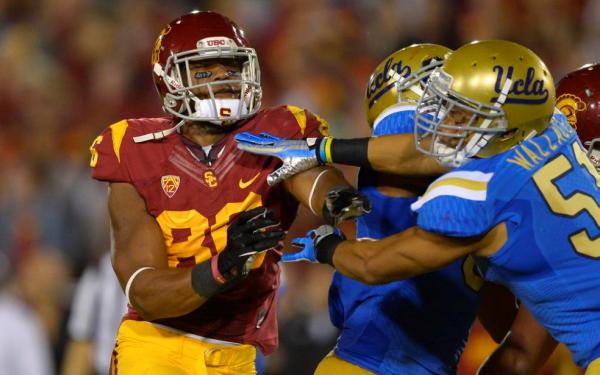 Chips, energy bars, sodas set out on tables lined with black tablecloths; a tour tram passing through the back lot. Jet-lagged coaches dishing out hoarse-voiced responses after coughing up all their good stuff to ESPN’s “car wash” media blitz in Bristol, Conn.

The Pac-12 commissioner, in opening remarks, mentioned that Scott was his favorite player. “He’s my favorite commissioner,” Larry Scott the player later joked.

The Pac-12, we keep hearing, is getting better and better.

“You know everybody is going to be better than they were a year ago,” Stanford Coach David Shaw said in opening statements eerily similar to last year’s. “I think it’s going to be an insane year in our conference.”

Commissioner Scott boasted of having six teams ranked in the top 25 of the season’s first USA Today coaches’ poll, only two fewer than the standard-bearer Southeastern Conference.

The Pac-12 was incrementally closing the perception gap and its network was still not available to subscribers of DirecTV, but stay tuned for further developments.

The trick to navigating this year’s kickoff media day at Warner Bros. Studios, famous for its Looney Tunes, was trying to decipher the truth in the Pac-12’s march toward the mountaintop.

The league failed to deliver on last season’s must-do list of producing a national champion other than USC. Oregon came close in the first year of the College Football Playoff, clobbering Florida State in the Rose Bowl before losing to Ohio State in the championship game.

“Until we win the national championship I don’t think we will get the recognition nationally we’re looking for,” Scott said. “And that’s fair.”

The media, perhaps tired of waiting for somebody else to get the job done, picked USC to win the conference this year.

The last Pac-12 school not named USC to win a national title was Washington, in 1991, and that was shared with Miami.

The nod toward USC over Oregon is an interesting bet on a program still rebounding from NCAA penalties. USC’s major hurdle will be in negotiating the brutally tough Pac-12 South Division, held down by Colorado from being the nation’s best. The Buffaloes could actually be vastly improved without anybody being able to notice in a division that includes USC, UCLA, Arizona, Arizona State and Utah.

So, is the Pac-12 really better than it was at this time last year?

There’s one new coach, with Gary Andersen moving from Wisconsin to take over at Oregon State for Mike Riley, who is now at Nebraska. Let’s call that a push.

This is the season, presumably, that USC quarterback Cody Kessler becomes the best quarterback in the league. Although, some people think that distinction already belongs to California junior Jared Goff.

The change in movie studios did not eradicate the Pac-12’s perception problems.

The SEC West went 2-5 in bowl games last season compared with 4-1 for the Pac-12 South, yet you’d be hard-pressed to find anyone ceding superiority to the west.

The Pac-12 champion should be in the four-team national playoff mix, yet the league didn’t crack the preseason top four of the coaches poll.

The most important — albeit snooze-inducing — news relative to the Pac-12’s growth was AT&T’s recent acquisition of DirecTV. That development could finally lead to a solution for that missing cable channel link in the Pac-12 Networks.

The lack of Pac-12 Networks on DirecTV has deprived millions of subscribers from seeing Pac-12 football, let alone rank it against other conferences. It has hurt the league’s image and, relative to the Big Ten and SEC, impeded short-term financial gains.

The good news is that AT&T and the Pac-12 are business partners, which should hasten a resolution.

Nailing down DirecTV would lift a huge, dark, cloud.

“That’ll be a big one,” Scott said. “That’s a big objective, no doubt, and we’re absolutely one step closer.”

Don’t expect the deal to get done in time for kickoffs in September.

“They’re still digesting it,” Scott said of the $49-billion deal. “We’re not going to think we’re their first, most important priority.”

Locking up DirecTV would put the Pac-12 in millions of additional homes and fortify a conference that made the risky, long-term decision to own 100 percent of its network.

The Big Ten and SEC Networks, at the moment, are financially outpacing the Pac-12. The SEC recently paid out $31.2 million in total broadcast revenue to each of its 14 schools, about $10 million more per team than the Pac-12.

However, the short game — the one involving a leather ball — is still hedged on USC and Oregon.

Check back next summer at a back lot to be determined to see how much progress has been made.

Football
NFC preview: How the Eagles stack up against the rest of the conference
785 views

Football
Austin Proehl, hopes to join his father with a Super Bowl ring, helps out by playing role of Edelman
1,660 views