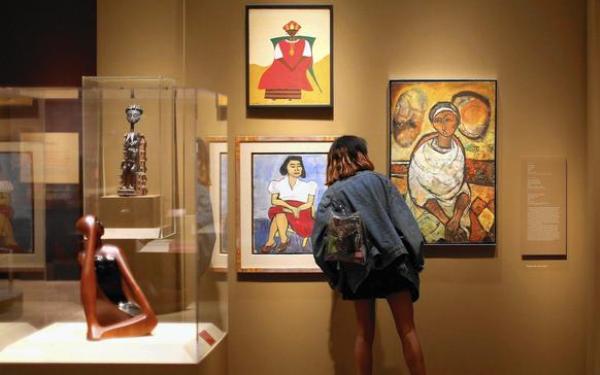 A year ago, Tracey Jones, a Baltimore teacher leading a field trip to the National Museum of African Art, might have lingered at the large quilt showing images of Bill Cosby, holding him up to her mostly African American students as a role model. Growing up, she says, she "wanted the Cosby family."

"I just thought that everybody was on board with what he'd done wrong and wanted to remove anything that supported Bill Cosby," Jones said.

SIGN UP for the free Essential Arts & Culture newsletter >>

As other institutions and companies have cut ties to the once-beloved entertainer — returning donations, renaming professorships, even canceling reruns — the National Museum of African Art is sticking by "Conversations: African and African American Artworks in Dialogue," which showcases works from the Cosby family's private collection interspersed with the museum's own works.

The museum, part of the Smithsonian Institution, must weigh the cost of appearing to support the disgraced figure against the value of displaying one of the world's largest private collections of African American art.

The museum has put a sign outside the exhibition that says "National Museum of African Art in no way condones Mr. Cosby's behavior. We continue to present 'Conversations: African and African American Artworks in Dialogue' because it is fundamentally about the artworks and the artists who created them, not Mr. Cosby."

Museum Director Johnetta Cole declined to comment. Linda St. Thomas, chief spokeswoman for the Smithsonian, responded to questions by email. "Once an exhibition is in place, we do not make changes unless it is a factual correction. To take away or alter certain objects or labels could potentially change the exhibition and lead to charges of censorship."

UCLA art history professor Steven Nelson said the museum "finds itself between a rock and a hard place. If the museum leaves the collection up, despite its disclaimer, it will be seen as standing behind Cosby. If it takes down the exhibition it, then it will open itself up to charges of censorship and caving to public pressure and political correctness."

The Smithsonian's statement satisfied other visitors present on the day that Jones saw the exhibition. Still, a casual observer would be hard-pressed to miss the presence of Bill and Camille Cosby. The quilt bearing images of the couple, a quote from Bill Cosby painted on a wall in large block letters, and a sign celebrating their roles as champions of the African American experience are featured prominently.

The museum said discussions about the exhibition began in 2012, before many of the recent allegations were revealed. The Cosbys rank among the wealthiest black families in the country and began amassing a collection before many private collectors became interested in African American art.

The collection today is one of the most widely admired private collections of African American art, art historians say, and its contents should not be overshadowed by Cosby's personal scandals.

"What is very significant about it is the depth of the collection. It has pretty much all the marquee names in late 19th and 20th century African American art," said Princeton professor Chika Okeke-Agulu. "I would rank the Cosby collection right up among the very top, if not the best, really."

"The contributions of black artists to the narrative of American art have been marginalized for far too long, and they need to be told," Erica James, a professor of art and African American studies at Yale, wrote in an email. "Key parts of that story reside in this collection."

Faith Ringgold, the artist who made the quilt that shows images of the Cosby family, said "the artists have nothing to do with what Cosby was doing."

Removing or changing the exhibition could have an effect on the institution's long-standing relationship with the couple. Camille Cosby serves on the museum's board, and Cole, the museum's director, was president of Spelman College when the couple donated $20 million to that school.

The exhibition has raised questions about the complicated relationship between museums and patrons, especially given that exhibiting a private collection can dramatically increase the value of the works. The Cosby family has given $716,000 toward the cost of the exhibition.

"An exhibition focused on this collection raises questions about conflicts of interest, especially given that displaying the collection could significantly raise its economic value," said Rosenfield.

Drawing a museum exhibition from a single private collection is a controversial practice, forbidden by some institutions, partly because the collector's individual taste is intrinsic to the show.

Halley Harrisburg, director of Rosenfield's gallery in New York, said: "When an institution chooses to feature a private collection they have obviously cultivated that relationship over years and years... and it would be an unspoken or, in some cases spoken ... hope that the collection would eventually come to that institution."

The professional standard is that a museum would show such a collection after the gift or the pledge of a gift.

St. James, the Smithsonian spokeswoman, said: "The museum does not hope to take this art into its permanent collection. The museum is devoted to AFRICAN art." She said the exhibition combining Cosby's collection with the museum's was "a departure from their normal exhibitions and programs" and "a nod" to the museum's 50th anniversary.

For now, the exhibit is scheduled to stay on display until Jan. 24.

VIDEO: Obama on Cosby: Drugging anyone for sex 'is rape'

Bill Cosby: A 50-year chronicle of accusations and accomplishments