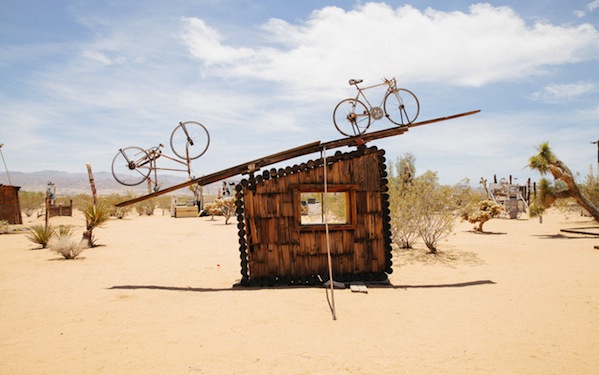 Somewhere in the deafening silence of Joshua Tree National Park, you will find yourself gazing upon an odd sight. At a brief glance, it may appear as if some eclectic hoarder has left behind remnants of their collection of unwanted knickknacks and rubble. But look closer and you will find a meticulous compilation of items worn and weathered by life and the destruction that it often causes. Look closer still and you’ll realize the way in which these seemingly dejected materials reflect much of our social consciousness and how we now communicate with each other and our world. This is the way in which artist Noah Purifoy examined the experience of social conflict, and this is the way we need to continue to do so.

Back in 1965, the confrontation between a white police officer and a young black man at the wheel of a car led to one of the most prolific riots that Los Angeles has ever seen. Watts was wreathed in flame as the community rose up against racial prejudice. Before the violence erupted, Purifoy was a graduate of CalArts, founder of the Watts Towers Arts Center, and with little work in his portfolio to show for it, but after, with his comrades up in arms, the clarity of his calling suddenly manifested.

His first sculpture series, 66 Signs of Neon, would be a recollection of the damage done to not only the physicality of Los Angeles, but the psyche of those who dwell within it by using the still smoldering debris of the wreckage.

Purifoy’s perspective explored with a focused intent the queer idiosyncrasies of modern social warfare. The assemblage of such bizarre materials, which represent a major turning point in our conversation of the racial divide, would be the first trickle of progressive, Dadaist momentum in Purifoy’s work, and would certainly not be the last.

From then on Purifoy would engage in his specific world of cultural disobedience by employing creative energy in others who had been denied such basic rights. He infiltrated the concrete walls of state prisons to militarize the jailbirds with paintbrushes, canvases, and a taste for the visually expressive with his ‘Artists in Social Institutions’ initiative. Much like Marcel Duchamp, Purifoy found seamless reason in confronting all that was never meant to be confronted.

And then it was to the dry desolation that basks east of the city of Angels where Purifoy saw grounds for creation. He continued to construct assemblages of only used items—some might call it ‘junk’—to further abstract conversation on the implications of societal injustices. To this day, Purifoy’s Joshua Tree Outdoor Museum sits quietly in its Mojave nest, evolving effortlessly with the conditions of its host landscape.

So, why do we, why should we still be talking about Purifoy’s work, over a decade after his death in 2004, and six decades after the instigation of his work in the little neighborhood of Watts? The answer is simple. If you redacted the date and the city of the riots, most readers would think we are talking about today. About now. About Freddie. About Michael. About Trayvon. About Sandra.

It is up to us to embrace the imperative nature of social justice, and Noah Purifoy’s work that lives on through the relentless heat of desert scorn is a model for our reaction to today’s outrages. We cannot forget that by simply engaging with the physical world and utilizing its ugliness to portray change we can finally see the beauty that comes with being fellow humans sharing breaths and words and glances and experiences.

So participate. Participate in the world that you live in. Use the creativity that is resoundingly unique to you to instigate something of enriching quality. Don’t know what I mean? Then head to LACMA anytime before September 27th to witness Purifoy’s emblematic work in the exhibition “Noah Purifoy: Junk Dada.” Undoubtedly, you will begin to see grace in Los Angeles’ decrepit facades and trash-riddled streets as the immense capacity of humanity’s warmth shines through.

To learn more about The Noah Purifoy Foundation, click here.