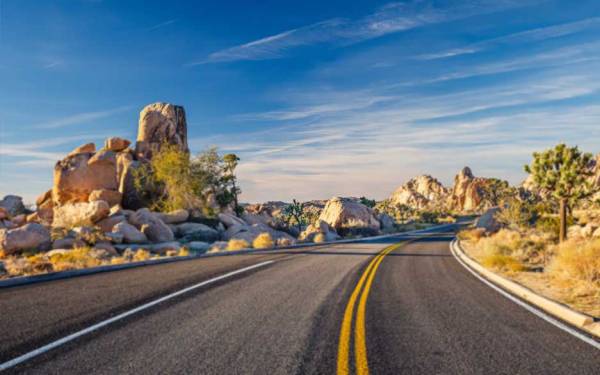 Greg Morse not only wants you to venture into the great outdoors, he wants to share stories, anecdotes and little-known-facts with you through an audio mobile app that can be used just about anywhere.

Morse and his Long Beach-based company created Just Ahead, a free mobile app that allows smartphones to provide audio tours of some of Mother Nature’s best works. From Joshua Tree National Park to the Grand Canyon, Death Valley and Yosemite, the app can help avoid the “are we there yet?” blues while providing miniature history lessons.

“Our guides are like having a park ranger whispering to you in your ear,” said Morse, founder and CEO of Just Ahead. “So many of these national parks are filled with wonders like canyons, ghost towns, unusual rock features and other things that you might drive past, and that shouldn’t happen.”

Morse knows all about long hours on the road vacationing with family. In fact, a “life-changing road trip” with his kids to the USS Midway in San Deigo was when he came up with the app.

“On arriving at the ship we noticed an audio tour was available,” he recalled. “We put our headphones on and proceeded to spend the remainder of that day exploring the ship and learning together about the Midway, its crew and its place in history. My family was enthralled.”

And that’s when an entrepreneurial light bulb went off in Morse’s head: “Why not audio tours for the road?”

After all, America has a 36,000-mile interstate highway system to explore.

“We want to turn the rest of the world into a museum, but a museum you can touch,” Morse said.

Morse, an Eagle Scout/instrument-rated private pilot/long-distance cyclist and avid sailor, said the company started with U.S. National Parks because they are national treasures visited by 292 million people each year.

More guides are planned for later this summer, including one for California’s famed Pacific Coast Highway, historic Route 66, the Blue Ridge Parkway and the Hawaiian islands, while other guides are in the works for the Great Smoky Mountains, Rocky Mountain, Mount Rushmore and even the Petrified Forest.

Travel writer Bob Howells, co-author of three National Geographic books and contributor for such publications as National Geographic Traveler, Men’s Journal, Smithsonian and Travel + Leisure, has edited the content for Just Ahead and is excited for more people to discover the world through the app.

“One thing that distinguishes writing for Just Ahead versus magazines and books is the fact that Just Ahead is a real-time experience,” Howells said. “Listeners are seeing what we’re talking about. We don’t need to write descriptively. Instead, we research and present stories that elicit a, ‘Wow, how about that?’ or ‘Isn’t that interesting?’ We’re not trying to dazzle anyone with our prose. We’re engaging in conversations with our listeners and sharing our enthusiasm for the places we visit.”

Education and entertainment factors aside, the guides also can help keep travelers from getting lost by suggesting directions even when to turn and what to do once you’ve turned. These guides are frequently updated and let travelers focus instead on the sights, sounds and scenery of their excursions, Morse added.

“It’s been a labor of love and a whole lot of fun learning about the natural and cultural heritage of the United States, supporting our national parks and other public lands,” Morse said.

While the Just Ahead app is a free download, individual guides are priced from $7.99 to $9.99. Howells’ favorite is the guide to Yosemite.

“It was a blast to drive the entire park for Just Ahead and to learn about places I’d previously glossed over or missed entirely, such as the covered bridge and 1880s buildings in Wawona or the dizzying views from Sentinel Dome and Taft Point off Glacier Point Road. Most people are in a hurry to see Glacier Point and miss those two short hikes that are absolutely superb,” Howells said.

Just Ahead is the recipient of the 2014 North American Travel Journalists Association Award for the best travel app and was named the best app for 2015 by the editors of Sunset magazine. But more importantly, it’s been well-received by explorers young and old.

“I got an email from a little boy named Alex — he’s 7 years old — who listened to one of the guides and told me he never knew the desert was alive,” Morse said, with a laugh.

“Very humbly, I like to think we’re following in the boot steps of John Muir,” Howells said, referring to the legendary conservationist. “I hope that by sharing the beauty and the stories of special places such as our national parks, we’ll inspire a deeper appreciation for them and that they will be preserved for future generations to enjoy them as we do.”