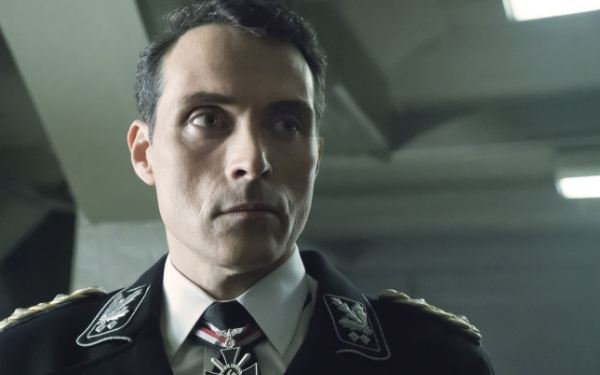 Rufus Sewell is among the cast of the Amazon series "The Man in the High Castle." Based on a Philip K. Dick novel, it imagines a world where the U.S. was defeated in World War II.
(Credit: Amazon)

So far Netflix is far and away the best established of these services with the most, buzziest original scripted series. But Amazon is coming on strong and may cut through the clutter with a batch of new shows this fall, most notably the drama series “The Man in the High Castle” (premiering Nov. 20 on Amazon Prime Instant Video). It’s based on the Philip K. Dick novel that posits an alternate history where America was defeated in World War II, and the former USA is divided up to be ruled by Nazi Germany and Imperial Japan.

Developed and executive produced by Frank Spotnitz (“The X-Files”), the pilot episode, available for free viewing at Amazon, has a lush, detailed look that posits a 1960s America after 17 years of German and Japanese rule.

“The biggest challenge was finding the visual alternate history,” Spotnitz said. “We knew from the pilot on we were discovering the rules of this world, and that does come down to hairstyles, wardrobes, types of behavior. We had a shot of Times Square in the pilot, and we had to ask, what would Times Square look like if we did not live in a corporate, capitalist society? What would their values be? … Would there be cars with fins? Would you have the space-age optimism in the design of home appliances? So there were literally thousands of props, set designs, hair designs and costume issues (our directors) have been on the front lines of deciding.”

Amazon’s Instant Video service, available to all Amazon Prime subscribers ($99 annually, includes video access and free shipping on Amazon.com orders), began its original programming push in 2013 with “Alpha House,” which may return for another season.

Since then Amazon has made 49 pilots that were available for Amazon customers to view and rate; 17 of those pilots went to series.

“We are drawn to creators who are passionate storytellers, who are doing this differently and have things to say,” said Roy Price, head of Amazon Studios. “There’s no doubt the ways people watch TV have changed.”

He joked about one of the key differences between streaming services and traditional TV: “We’re moving ‘Bosch’ to Wednesday at 10 p.m. Kidding! You can see it anytime. It’s your schedule that matters, not ours.”

Amazon hit a home run last year with buzzy dramedy “Transparent” (second season debuts Dec. 4), about a Los Angeles patriarch (Jeffrey Tambor) transitioning to life as a woman. Both Mr. Tambor and the series are in the running for Emmy Awards this year. (“Transparent” became the first streaming service production to win the best comedy Golden Globe in January.) “Transparent” and Netflix’s “Unbreakable Kimmy Schmidt” are both nominated in the Emmys’ best comedy series lead category.

“Transparent” creator Jill Soloway, who has a trans parent, said “Transparent” was a personal show that she dreamed up not long after her personal experience.

“I wanted to write something nobody had ever written before, and I wanted to write something that will change the world,” Soloway said, noting that she hoped by bringing transgender issues to light she would make the world a little safer for her own trans parent to hail a taxi or walk down the street. “Over the past year it’s become a part of the zeitgeist and it’s the civil rights movement and the publicity around the kinds of ways in which trans people are discriminated against, and that’s all coming to light. We’re making a television show, ostensibly a comedy, it’s entertainment, but to feel like it’s all for a larger cause is the most exciting part of this.”

Season two of “Transparent” includes a trans writer on staff and a trans director for one episode. (“Trans people need to be telling their own stories,” Soloway said.)

“Maura is not the central figure, she’s more of a gateway figure for stories evolving from this decision to be authentic,” Tambor said.

“We’re taking the bubble wrap off and letting Maura be as fallible as her children,” Soloway said.

Other series debuting on Amazon in the coming months include “Hand of God” (Sept. 4), a drama starring Ron Perlman (“Sons of Anarchy”) as a ruthless power broker who believes he’s receiving messages from God following a family tragedy, and “Red Oaks” (Oct. 9), a coming-of-age dramedy set at a New Jersey country club in 1985.

“Coming from another dream factory called FX, I was insistent on finding a way to continue to see if lightning can strike twice,” Perlman said. “With Amazon it’s been a love affair. … It’s a beautiful place. I’m sure 10 years from now it will all get (messed) up.”

Additional returning Amazon series include orchestra dramedy “Mozart in the Jungle” and police drama “Bosch,” which will be back with new seasons in early 2016. Mr. Price said “Bosch” has been Amazon’s best-performing title in the U.S. and overseas.

A Woody Allen-written and directed series will air during the second half of 2016.