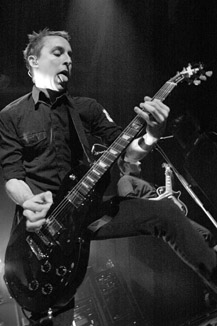 There are few things that should really inspire people to ever want to drive to Pomona.

Yellowcard is surely not one of them.

Luckily, Over It and Mae are worth the trek to one of the more godforsaken parts of SoCal. And if Yellowcard happens to be there too, well then hey, whatever.

Let's be fair though. To Yellowcard's credit, the band knows how to pick some awesomely talented support acts, but much to the members' chagrin, they picked openers who would totally upstage them.

Taking stage first, homegrown L.A. pop-rockers Over It (so good, we're going to pretend California had them all along and disregard any of their pre-Cali history in Virgina) showed the audience why it was the real band not to miss on this bill.

From the second they walked out, Over It commanded a level of respect that young bands just don't garner unless they have the integrity, maturity and musicianship to genuinely warrant it.

Touted as the definitive pop-punk band that's not a guilty pleasure, Over It did more than just break a few long-standing genre stereotypes during its set. Playing songs off last year's release, Silverstrand, every member of the band rocked out, emoted and made sure their audience had fun simply by coming off as their normal everyday selves. What a concept that it doesn't take makeup, a gold vampire-fanged grill or strippers to have a completely engaging live show, huh?

While Over It's musical formula seems simple enough, it's that spark of showmanship in each of guitarist Nick Bailey's jumps, that inherent charisma in singer Pete Munters' fluid swagger that makes them so irresistibly likeable. Making some of the biggest-sounding rock within its genre, Over It managed to do something almost epic with this show.

Following the nearly insurmountable bar placed by Over It, Mae would valiantly try its hardest to rock the audience again and do a pretty good job of delivering. Playing songs from its new release, The Everglow , the band was warmly welcomed by fans that were happy to jump and clap along to its beat. For being a heavier band, Mae proved to still be easily accessible, with vocalist Dave Elkins' soaring vocals complimenting the darker tones created in the keyboard-infused songs.

Apparently not worn out by the first two bands, concertgoers were still clamoring to see their headliner. Not to say dedication like that counts for very much, as lots of people buying into something bad doesn't make it any better. Just look at Ashlee Simpson.

Yellowcard poses quite the challenge for an honest critic. It's hard to resist the urge to just give in and like them with reckless abandon, like it was OK to do three years ago. But it's just not that easy anymore.

Much as the band puts on this poppy, fun-lovingly wholesome front, there's no chemistry between any of the members. And no amount of ear-to-ear smiling or bouncing across the stage from frontman Ryan Key can cover that up.

Maybe it's the fact that its newest member, guitarist Ryan Mendez and relatively less new member, bassist Pete Mosely, have zero stage presence or personality between them. Moreover, the two seem destined to remain stuck in the shadows of their far more adept and likeable predecessors, Ben Harper and Alex Lewis, respectively.

Maybe it's the fact that while violinist Sean Mackin is unarguably the one thing that keeps Yellowcard's music from being generic, his goofy, unconvincing perma-grin and manic jumping make it look like he has less to do on stage that that guy in the Mighty Mighty Bosstones whose only function was to dance.

Maybe it's the fact that there's really nothing fun about Yellowcard anymore. As physically energetic as the band is while performing, the music itself feels lifeless. Despite uptempo beats and fast paced guitar shredding and drumming, it can't mask the melancholic undertones each band member puts out.

Maybe next time the ‘Card should pick some worse opening acts so its members can be the stars of their own headlining shows. Word on the street is Ashlee Simpson isn't doing anything right now… —Brien Overly