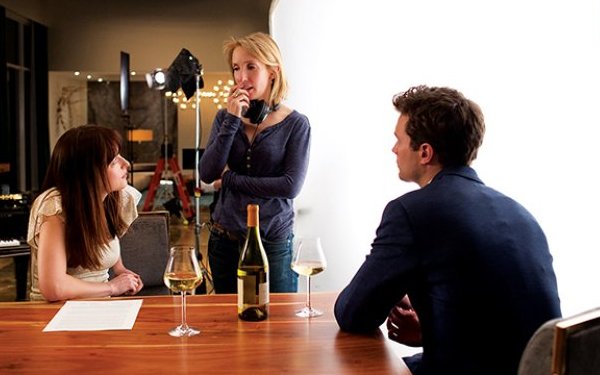 Director Sam Taylor-Johnson, Dakota Johnson, Jamie Dornan on the set of 50 Shades of Grey, one of only 1.9 percent of the movies directed by women.
(Credit: Universal Pictures)

A new USC study has found that women had less than one-third of the speaking roles in the top-grossing films between 2007 and 2014 — another indication of the extent of Hollywood's longstanding gender and diversity problems.

The study by the Media, Diversity & Social Change Initiative at USC's Annenberg School for Communication and Journalism released on Wednesday painted a picture of an industry with glaring inequalities both on-screen and behind the camera.

Researchers called the report "clearly the most comprehensive longitudinal research report on gender and race/ethnicity" to date. The results are not encouraging for anyone seeking signs of progress regarding diversity in Hollywood.

"I feel like we now have a map, a picture, of what we've been calling the epidemic of invisibility on-screen," said Stacy L. Smith, a professor at USC and director of the Media, Diversity initiative.

According to the report, females represented just 30.2% of all speaking characters across those 700 movies. Only 11% of the films were gender balanced or featured girls/women in roughly half of all speaking parts.

The report examined the 100 top-grossing films released each year from 2007 to 2014 (excluding 2011) and found that women, minorities and LGBT people are statistically underrepresented as speaking or named characters.

The study also pointed to a lack of progress in portraying minority characters. In the 100 top films in 2014, less than 27% of speaking characters were from an underrepresented racial/ethnic group, according to the report, which noted that 17 of those 100 films featured no African American characters.

The situation was no better for LGBT characters. According to the study, out of 4,610 speaking characters from the top 100 films of 2014, only 19 were lesbian, gay or bisexual. There were no transgender characters in the 100 top-grossing films of 2014.

The findings were not encouraging behind the camera either. In 2014, only two of the top 100 films had a female director. Across the group of 700 films, there were 28 female directors, with only three female directors who were black and one who was Asian.

"I think we have cause for major concern about inclusivity," said Smith of the lack of diversity among directors. "I think one thing we want to do is say, here is a metric of what we're seeing on-screen."

The lack of representation of women and people of color on both sides of the camera has become an increasingly prominent issue in Hollywood. Earlier this year, the film industry drew criticism when all 20 of the Oscar acting nominations went to white performers, for only the second time since 1998. Backlash on social media inspired the hashtag #oscarssowhite.

In May, the ACLU called upon state and federal agencies to investigate gender discrimination at major Hollywood studios, networks and talent agencies, asserting that women are "systematically excluded from or underemployed in directing jobs."

Smith noted there is no one-size-fits all solution to the problems pointed out by the study, and that each facet of representation — in front of and behind the camera — would demand its own strategies for change.

"Once you start pushing different levers for different problems," Smith said, "that's when we can see some of the resistance lighten and actually change the findings."

So many summer movies, so few female directors

Video: Abbi Jacobson and Ilana Glazer on how 'Broad City' has come to define female friendship