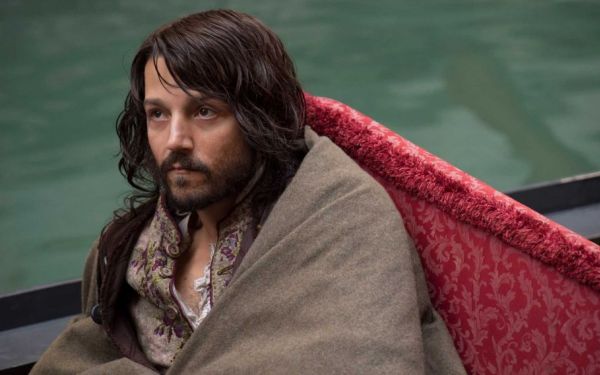 Diego Luna in the title role of “Casanova,” who escapes prison and starts over in Paris.
(Credit: Bruno Calvo)

Amazon got a big boost with the 11 Emmy nominations bestowed on its superb comedy-drama “Transparent” a few weeks ago. But no original-content provider can be considered a bona fide major player without a sizable and regularly refreshed stock of original shows.

Amazon moves further toward that goal on Friday with two very different but very watchable dramas, “Casanova,” based on the Lothario of legend, and “Sneaky Pete,” the story of a wily con man created by David Shore (“House”) and multiple Emmy winner Bryan Cranston. Viewers are offered the chance to watch the shows and provide feedback to Amazon Studios, which may develop either or both shows as full original series for Prime members.

“Pete” was originally created as a pilot for CBS, but Amazon gives it a much more loving and appropriate home. Giovanni Ribisi stars as Marius, a con man about to be paroled. His no-account brother Eddie (Michael Drayer) is waiting for him on the outside, and the plan is for the two of them to head for the hills because they can’t pay off a sizable debt to a certain bad guy.

Marius’ cellmate is a guy named Pete who won’t shut up about his family back home. It drives Marius nuts, hearing how sweet apples tasted and how vibrant the color of the grass was that Pete ran through when he was a kid.

Then the light dawns: Marius knows enough about Pete to assume his identity, which could extend his life once he’s sprung from prison.

Rechristening himself as Pete, he finds his way to the all-American white clapboard home of Grandma and Grandpa Audrey and Otto (Emmy winner Margo Martindale and Peter Gerety), who run a bail bond service along with Pete’s cousin Julia (Marin Ireland), a single mom who is dating Pete’s boyhood best friend, Taylor (Shane McRae).

If it all sounds like the setup for farce, well, maybe that’s the biggest con you’ll witness on “Sneaky Pete.” It may have farcical grace notes here and there, but the series is a drama. At any moment, Pete could be found by the guys out to either ice him or get their money back, or found out by members of his “family.” We already get the idea no one puts anything over on Grandma.

The cast is terrific, especially Ribisi, whose eyes could have been the model for the Droopy Dog cartoon character. No con man ever had such a useful face for deception.

The show’s pedigree offers hope that it won’t tumble into pitfalls of obviousness, such as, say, warming up an “As You Like It” romance between Pete and Julia — at least not too quickly.

“Pete’s” primary hook is watching its antihero keep an eye out for his pursuers, while using his fine-honed con skills to help Julia and the rest of the family find bail jumpers.

“Casanova,” written by Stuart Zicherman, begins in prison as well. Casanova (Diego Luna) is languishing in a Venetian prison and feeling contrite for his various moral infractions. All of a sudden, the roof caves in, literally, and Casanova is able to escape.

He hightails it to Paris with every intention of living a more upright life, as opposed to a more horizontal one. But of course that isn’t to be. He falls in with various factions vying for political power and influence in the royal court. The minister of finance, De Bernis (Ben Daniels), is scheming to lessen the influence of Louis XV’s mistress, Madame Pompadour (Bojana Novakovic), and Casanova seems game to help him out, but for his obvious attraction to the object of De Bernis’ jealousy.

The cast also includes Miranda Richardson as the Marquise d’Urfé.

Oscar-nominated director Jean-Pierre Jeunet (“Amelie”) indulges the richness of the setting and story to perfection, and Luna is winning as the multilingual Giacomo Casanova. He’s a little rough around the edges, a bit scruffier than, say, the Heath Ledger Casanova, but that makes him even more fitting for the role. He is so practiced in the art of deception and seduction, so what if he needs a haircut and a shave?

Although we’re already smothered by election series, this is one race that’s worth your attention, and the rarity is that both candidates merit your vote. They both display promise of being worthy series.