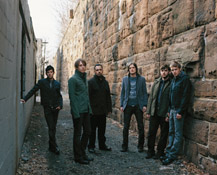 The members of Thursday have been dealing with a lot lately, even though until a month ago, it had been nearly two years without any sight or sound of them. Considering the New Jersey natives weren't even in the public spotlight after their headlining stint on the 2004 Vans Warped Tour, there was still much ado over their relationships with each other and their status as a band. Certainly not the kind of drama one would expect to surround six, smart professional musicians and all-around nice guys.

Luckily for the masses and the music industry this band could single-handedly fix, it was all bunk.

In a time when rock is dominated by emo bands vomiting out trite clichés about the girl who broke their hearts in fourth grade and pop-punk egotists/Internet exhibitionists, Thursday really couldn't have picked a better time to remind the world it still exists.

With its new album, A City by the Light Divided, the band has returned with a new energy, ready to take on life with its signature intellectualism.

“I think the album was something we've been wanting to do for a long time,” says bassist Tim Payne of the band's follow-up to 2003's acclaimed War All the Time.

“Basically, we went into it saying we're going to take as much time as possible to write a good record,” he says. “It was just really liberating to not have any deadlines or guidelines to follow.”

Payne and his band mates, k eyboardist Andrew Everding, guitarists Tom Keeley and Steve Pedula, vocalist Geoff Rickly and drummer Tuker Rule, all agreed this album needed to showcase the real Thursday, both for their sake and listeners.

“As far as outside influences, they're really minimal,” he says. “It was the first time since before [2001's] Full Collapse that we had written together and been able to enjoy every piece of the process.”

While fans of War may be surprised to hear that, Payne doesn't hesitate to admit that the band is critical of itself, even after completing such a masterful effort as its previous album and major label debut.

“When we wrote War All the Time , we wrote it in two months. Then once we heard the record, we were like, ‘Maybe we should've done this, or maybe we should've tried this.' This is the first time we actually got to try all these things after hearing the songs and understanding what the songs are doing.”

“We flushed out a lot of ideas and in the past, we might have been hesitant to go to those places musically,” Pedulla adds of his band mates' willingness to evolve. As such, listeners and longtime fans may be surprised with what they hear on the album.

Though bands often like to say that their newest album is “unlike anything you've ever heard before” in complete delusions of revolutionary grandeur, just how much Thursday pushes its own envelope is readily apparent on each of City' s tracks. While War was something of a bipolar lamentation of society and existence that alternated between explosive aggression and wrist-slitting melancholy, City sees the band emote more with atmospheric tones than blatant vocal shifts.

Rickly still remains the poet laureate of modern rock, but the album sees each of the six members of Thursday shine equally and cohesively. Together, they create a poignant and sometimes downright haunting, but decidedly less heavy-handed, work of art for this album.

Pedulla references one new song in particular that he believes represents what his band is all about. Quoting the line “Is this all we've ever known of God?” from “Sugar in the Sacrament,” he says, “It's not even about religion. There's something very ‘higher power' about playing music, having people sing along and having this kind of connection between it all.”

The fact that Pedulla is quick to point out that the lyric isn't meant to be taken at face value may have something to do with the fact that Thursday is no stranger to controversy over thematic context. In early 2004, the band shot a video for the song “War All the Time” as the album's second single, which was expected to hit it big after the success of lead single “Signals Over the Air.” Not the case, unfortunately.

“We did a video for that song and nobody would play it because they thought that it was ‘controversial' for no reason,” says Payne. “I could never tell if that was just an excuse for them really not wanting to play the song, because we'd turn on the TV a week later and see a video that was way more over the top and controversial,” he adds.

The band took the blow in stride, however, and has since learned from the experience. Culling words of wisdom he himself once received, Payne says, “Once you write a song and you put it out, it's no longer your song. Whoever hears it, it belongs to them.”

“We just have to keep doing what we think is right and not worry about the consequences,” Payne adds. While Thursday's conceptually layered honesty leaves it open to backlash, the band's resolve and commitment remains strong. He continues, “There's never going to be anything you can do that some people won't misunderstand or take the wrong way, so you just do what you feel is natural and hope that there are people who feel the same way you do.”

Even though Rickly may have wailed, “This is how it feels, calling out but no one even hears the signals that we send,” on Thursday's last album, something says that won't be an issue for them this time around.

A City by the Light Divided will be available May 2. For more information, visit www.thursday.net.