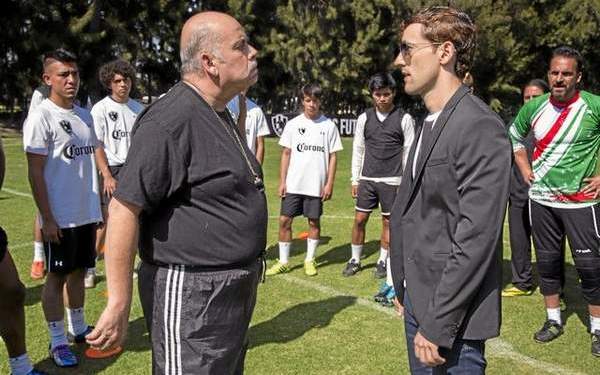 It only seems that Netflix has conquered the world, but there are still a few vistas left.

The 13-part dramedy is from Gaz Alazraki, director of “Nosotros Los Nobles,” the second-highest-grossing film in Mexican film history. If you are expecting another tawdry telenovela, “Club de Cuervos” is anything but. It’s high-energy, entertaining fun. Set around a fictional soccer club and the fighting between the brother and sister owners, the series has the sophistication and values of a pay cable show.

Luis Gerardo Méndez plays Chava, the irresponsible son of the owner of Club de Cuervos. “We had an idea — what if Tommy Boy inherited a soccer club,” says Alazraki, who created the series with Mike Lam. He’s referring to the 1995 Chris Farley comedy.

Unlike the slobbish Tommy, Chava is handsome and charming. A rich, entitled party-boy, he knows nothing about the business of running a soccer club. His father’s last words to him are “You’re no captain.” Yet when his father dies, everyone, including the rabid fans, look for him to take over.

This is despite the fact that his older sister, Isabel (Mariana Trevino), actually has been handling much of the club’s management, though no one gives her credit.

“For me, this is what happens when the power is in the wrong hands. You can see how ambition changes him,” says Méndez, who adds that the character’s relationship with his sister becomes very dark as the season progresses.

“People who inherit that kind of power often don’t really understand how it affects other people,” notes Alazraki.

Universal themes like that are what the filmmaker and Netflix hope make “Club de Cuervos” a hit. The streaming service is available in the U.S., Latin America, Mexico, Brazil, Canada and some European countries and has announced plans to enter Spain, Portugal and Italy.

The idea, says Alazraki, was to penetrate an audience that has been neglected by the major networks around Latin America, which mostly produce telenovelas. “The more sophisticated and better-educated audiences have been flocking toward U.S. entertainment,” he says.

The series was set in the world of soccer in Mexico because “there were many natural entrances and hooks that the different demographics could relate to,” the director says. To keep it edgy, they created a fake town with a fake team so it could stand for most teams and towns around Latin America.

As it turns out, according to Alazraki, most Mexican clubs are populated with many players from other Latin American countries, which gave them plenty of opportunities to bring in actors from other countries.

Peruvian actress-model-singer Stephanie Cayo plays Mary, the sexy mistress of Chava’s father. After he dies she tells the family she is pregnant with his child. That complicates the questions of Chava’s and Isabel’s inheritance. As they wait to find out if Mary’s story is true, the siblings battle for control of the team.

Netflix and Alazraki are hoping U.S. audiences, whether Spanish-speaking or not, also take to the “Club de Cuervos.” The director believes the series will speak to people no matter the language.

“Why is ‘Clueless’ so well-received in Madrid?” Alazraki asks. “It’s because of that same anxiety of being accepted in high school. If you can keep the emotion sincere, then your movie should connect.”

The filmmaker says he tried to make “Cuervos” that way. “We wanted to make a Mexican show that speaks to the rest the world.”

Inarritu and Cuaron won the last two directing Oscars, and del Toro has a nomination.

Unlike the “Amigos,” though, the new generation of Mexican directors doesn’t have to leave home. Alazraki says the country now has a “fertile ground to really build an industry. The entrance of Netflix into Mexico only broadens the possibilities.”