The Diary of a Teenage Girl is vivid, even shocking, but a rare gem 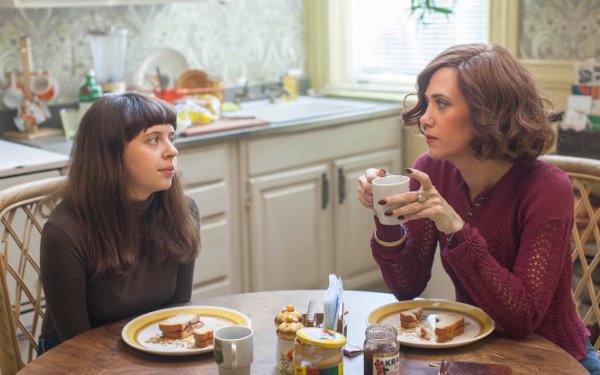 Bel Powley and Kristen Wiig in The Diary of a Teenage Girl
(Credit: Sony Pictures Classics)

LOS ANGELES — Big summer action movies can be thrilling, but if you really want to feel your heart pounding out of your chest, try being a 15-year-old girl for 101 minutes.

“I had sex today! Holy...!” Minnie declares with defiant joy in the opening line of the movie, based on a script Heller adapted from a 2002 graphic novel by Phoebe Gloeckner. Minnie has just lost her virginity to her mother’s 35-year-old boyfriend, Monroe, a couch-surfing opportunist played by Alexander Skarsgard, who walks the razor’s edge between charm and smarm with remarkable subtlety. As alarming as their relationship is, it doesn’t play out in conventional ways, because the audience is — for once — watching it unfold through Minnie’s hungry eyes.

Kristen Wiig is Minnie’s loopy, hard-partying mom, Charlotte, who has selectively absorbed messages from the women’s movement. She empathizes with Patty Hearst but trashes Minnie’s best friend for her thick ankles. Christopher Meloni is Minnie’s patronizing stepdad, Pascal, the only grown-up in the movie who at least seems to be attempting to impersonate an adult, albeit in an I’ve-read-Freud-and-you-haven’t kind of way.

With all the adults engaged in adolescent behavior, what’s a teenage girl to do but shrug and join the party? When Monroe grabs Minnie’s breast one night while watching TV, she thinks it’s probably all right because, “he’s a good guy and he knows how it goes and I don’t.” Like this line, much of the movie’s best dialogue comes from Gloeckner’s magnificent book. When Powley delivers the lines in lively voice-over, they feel wholly authentic to a teenage girl’s thoughts as she vacillates from childhood to womanhood and bravado to insecurity in the span of a single sentence.

Powley, a 23-year-old British actress whose previous work has been in TV and theater, is remarkable at capturing both the vulnerability and the swagger of a young girl discovering her sexual power, while Skarsgard manages the near impossible task of humanizing his character. There’s a hilarious poignancy when Monroe realizes the teenage girl he’s having sex with actually acts like a teenage girl. Wiig’s portrayal has a hair less realism than the other two, though she seems to be having an awful lot of fun as a reckless ‘70s mom, flicking her cigarette without a care.

Heller and her cinematographer, Brandon Trost, shoot the movie’s many, many sex scenes in a way that is explicit but not exploitative, training the camera on Minnie’s point of view and capturing the lusty, awkward moments through Powley’s expressive, wide eyes. It is precisely this point of view that makes Monroe the object, not Minnie, and renders the movie a profoundly compassionate portrait of young female sexuality rather than a cringey “Lolita” update.

Heller’s focus on physicality isn’t limited to sex, and Minnie’s starvation for touch is communicated in other sweet, subtle ways, as when she’s happily dancing and bumping rear ends with her mother, or alone in her bedroom, in front of a mirror appraising her changing body.

There’s a down-and-out element to Minnie’s world, a seedy, scary side of San Francisco. The movie’s production design by Jonah Markowitz believably re-creates the fade-out of the hippie era via well-chosen details, like an Iggy Pop poster, an afghan, a wood-paneled wall, without ever devolving to kitsch. The TV is always on in Minnie’s house, and references to shows like “Little House on the Prairie” or news coverage of the Hearst kidnapping serve to cement the sense of time, while the adult pastimes — Monroe is joining the EST movement, Charlotte has discovered cocaine — also help locate Minnie’s family firmly in the Me Decade.

For many, the ‘70s were a boundaryless era when it came to sex, and “The Diary of a Teenage Girl” lives in that gray place. Although the movie never condones Minnie’s relationship with Monroe, it never condemns it either, nor any of her other sexual experiences, from jackrabbiting with a boy her own age to engaging in risky encounters with men and women.

It’s hard to overstate what a radical idea it is to show a teenage girl enjoying sex in a movie. Even adult women, like comedian Amy Schumer, whose character climbs in and out of beds in this summer’s comedy “Trainwreck,” and reality TV makeout bandit Kaitlyn Bristowe, who controversially sampled the lips of multiple suitors on the most recent season of ABC’s “The Bachelorette,” have been subject to cruel shaming comments for admitting to the most basic human trait, enjoying sex. That Minnie does, and that she emerges with her dignity intact, is the movie’s biggest provocation.

Minnie is a budding artist, and throughout, the movie relies on beautifully tactile and whimsical animation sequences by Icelandic artist Sara Gunnarsdottir to communicate the richness of her inner world. When Minnie discovers the work of female underground comic book artist Aline Kominsky and starts up a pen pal relationship with her, Kominsky becomes a lifeline, a hand reached from one generation of woman to another saying, “I know how you feel.”

It’s easy to see Heller’s movie serving much the same reassuring function for young women, although its R-rating and sexual themes may be too much for many parents of teen girls. An inscription that appears in both the movie and Gloeckner’s book offers guidance as to the intended audience: “For the girls,” it says, “when they have grown.”

‘DIARY OF A TEENAGE GIRL’