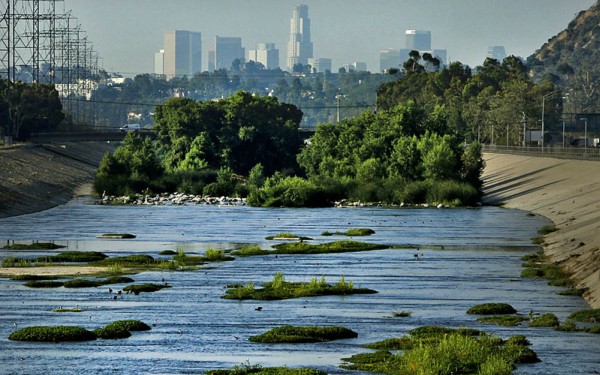 Renowned architect Frank Gehry is working with Los Angeles officials in the public and private sector to draft a new master plan for the redevelopment of the Los Angeles River.

Gehry's involvement is a potential turning point in the decades-long movement to transform the concrete-lined waterway that winds through the heart of the Los Angeles Basin. It promises to bestow the cachet of one of the world's best-known artistic celebrities on a restoration effort that Mayor Eric Garcetti has placed at the center of his agenda.

Many details of Gehry's work -- including exactly what his plan entails and how much it would cost -- are still unknown. Two sources who have seen a presentation on the plan by Los Angeles River Revitalization Corp. officials said it appears to be a broad reworking of the Los Angeles River Revitalization Master Plan that L.A. city officials adopted in 2007 following extensive public input.

That plan established the city's long-term goals for the river; established design guidelines for the redevelopment of its banks and the surrounding areas; and laid out a detailed vision for public access to the river and the preservation of parkland and recreational areas in the 52-mile river corridor.

The sources said the presentations they saw did not include renderings of specific landscape or architectural features, such as walkways or bridges. However, they said that maps included in the briefing made clear that Gehry's plan will encompass the entire reach of the river from L.A. to Long Beach, and could also apply to its tributaries.

Despite its potential benefits, however, the new plan is getting a cold reception from the community of activists who have helped draw attention over the years to what was once a forlorn environmental cause. Some of those activists express concern about the secrecy surrounding Gehry's work and the near-total lack of public input to date on such a far-ranging blueprint for the river's future.

The critics also say the sudden announcement of a new direction for river redevelopment could imperil federal funding for a $1.4-billion restoration project, focused on 11 miles of the river as it winds through Northeast L.A. and the downtown area. The U.S. Army Corps of Engineers has given tentative approval to the project but has not yet decided how much of the cost it is willing to bear.

Such concerns came to a head this week, when Friends of the Los Angeles River, the nonprofit group led by iconic poet and environmentalist Lewis MacAdams, sent a letter to the Los Angeles River Revitalization Corp. refusing to support the project or take part in a press conference announcing Gehry's plan that is scheduled to take place at the end of this month.

In the letter, obtained by The Times, MacAdams wrote that he feared the "new vision and plan for the river led by Frank Gehry" would "undermine our efforts and create confusion among the public and political leadership."

In an interview, MacAdams said his group's decision not to endorse the project stemmed from tactical considerations in the battle to fund environmental restoration and philosophical opposition to the sort of top-down land-use planning that led the federal government in the mid-20th century to turn a meandering alluvial river into a notoriously unsightly drainage channel.

"Last time there was a single idea for the L.A. River it involved 3 million barrels of concrete," MacAdams said. "To us, it's the epitome of wrong-ended planning. It's not coming from the bottom up. It's coming from the top down."

Gehry, a Canadian-born architect who lives in L.A., has designed some of the world's most famous and recognizable buildings, including the Guggenheim Museum in Bilbao and the Walt Disney Concert Hall in downtown L.A. His best-known structures are characterized by a free-handed sculptural sensibility -- the flaring steel walls of Disney Hall offer one example -- that has drawn both praise and criticism.

L.A. River art project gets a boost from Michael Bloomberg

L.A. could wind up covering much of $1.3-billion river project cost