Josh Kun prepares 'To Live and Dine in L.A.' with chef Roy Choi and Rakaa Iriscience 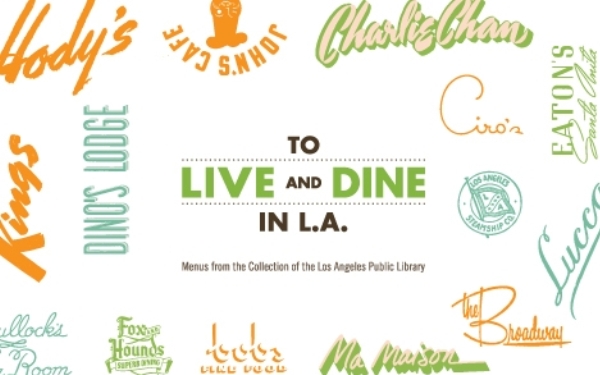 Imagine analyzing the history of a city by looking at its menus. That's exactly what Josh Kun, an associate professor at USC, has done in his current project, “To Live and Dine in L.A.,” a book and exhibition of the same title that he curated for the Los Angeles Central Library. For this, Kun used the library's collection of more than 9,000 menus, dating to the 1850s. Kun has partnered with hip-hop artist Rakaa Iriscience and chef Roy Choi to host the related event “To Live and Dine in L.A.: A Live Mixtape” on Sunday at the Regent Theater in Los Angeles. The event brings together artists in a “DJ-driven, multidimensional journey” to help bring attention to issues of food insecurity in L.A.

What do you look for when analyzing the menus for this project?

It was kind of a twofold thing. First, I wanted to honor the collection of menus as they are. But then I also wanted to take it to the next step: How can one animate it and bring it to life, to create a contemporary conversation? It's preservation on the one hand and activation on the other.

What can a menu tell you about a city?

A menu can say so many things. At first, I thought a menu was only about showcasing what food is offered and the price. But it can show so much more. Menus can illustrate demographics of a city, changes in population, immigration, changing geography, gender politics, race and ethnicity. Even the way a city is marketed. You can read a menu the same way you'd read a short story, novel or photograph. They are urban texts, prismatic texts.

Tell me a little about the mix-tape.

Think of it like the Moth or TED meets a hip-hop show. I worked with Roy Choi on this project; I met Roy through rapper Rakaa Iriscience of Dilated Peoples. The three of us thought it would be amazing to bring these menus alive through a hip-hop setting. It's kind of like a new-school variety show.

Who are some of the performers?

The setup itself will consist of a DJ on one side of the stage, DJ Zo, who will be spinning, and on the other side will be Roy. But instead of spinning on turntables, Roy will have two induction burners and will be cooking all night.

There will be music from Mia Doi Todd, Ras G, Cesar Castro featuring Cambalache & Son del Centro, plus an opera singer turning a menu into an aria. We'll also have Norman Lear, who will talk about the role of food in television shows over the years. Evan Kleiman, host of “Good Food,” will be there. Tembi Locke will talk about food as personal healing. Roger Guenveur Smith and Mark Broyard will perform an excerpt from “Inside the Creole Mafia” (there will be blenders!). And Chris Cormier of the Los Angeles Mission will be there, talking about his own experiences on the streets and how he got involved with the mission. And then we've got a great grand finale.

What sort of finale can top all of that?

Roy's going to cook all night, and at the end of the night everything Roy has cooked will be inspiration for legendary rapper MC Supernatural. MC Supernatural is known for his freestyle rapping and has a record for the longest continuous freestyle ever, rapping for over nine hours. He's going to take Roy's food and improvise on it in a freestyle.

The "To Live and Dine in L.A." exhibition is open at the Los Angeles Central Library in downtown L.A. through Nov. 15. lapl.org/whats-on/exhibits/live-and-dine-la