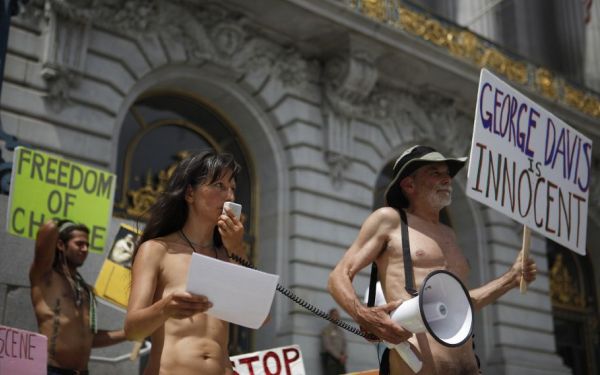 On the steps of San Francisco City Hall Thursday it was the activists, not the emperors, who had no clothes.

Nude activists dropped trou Thursday afternoon to protest the prosecution of one of their own in the nation’s capital.

George Davis, flanked by a handful of his supporters, proudly stood in the buff for all passersby to see in an attempt to call attention to his upcoming trial on indecent-exposure charges in Washington stemming from his arrest in May for trying to give a speech while nude in front of the Capitol.

Davis, who started Thursday’s protest in an apron, sunglasses, a fanny pack and not much else, went to the steps of City Hall to share his belief that the naked body is something people should be proud of.

“The general theme today is body freedom. The human body is nothing to be ashamed of,” he said. “It comes down to a public health issue. How can it be healthy for people to be ashamed of parts of their own bodies?”

Eventually shedding the apron, but keeping the fanny pack, Davis spoke on the issue to a small group of reporters as wide-eyed newlyweds posed for pictures in front of City Hall just steps away and equally surprised tourists snapped photos with bemused expressions.

“It’s bizarre,” said Deb Rochford, who was visiting San Francisco from Phoenix with her family when she happened upon the protest.

“I didn’t expect to see it. We’re in the midst of this beautiful city full of art. I’m not offended by it, but I don’t know if it’s the best look for the city.”

But while most who encountered the clothes-free activists quickly looked away or chuckled to themselves, the issue is a serious one to Gypsy Taub, who, along with Davis, is well known in the city for protesting San Francisco’s own nudity ban.

Davis, along with fellow nudity proponent Stacey Lunin of New York City, went to the Capitol Reflecting Pool near the U.S. Capitol around noon on May 1 with plans to disrobe, make a speech and pose for a sketch artist.

Davis recalled being nude “for less than a minute” before he was handcuffed, covered in a vinyl sheet and carted off to a holding cell, where he was detained for three hours before being released with an indecent-exposure charge.

He claims his nudity was an act of political and artistic expression and insists there was nothing lewd or sexual intended.

He also hopes a not guilty outcome from his upcoming day in court would set a precedent in the nation’s capital.

“We’ve already achieved body freedom in New York City, which is the artistic and financial capital of the country,” he said. “If we can get it in Washington, D.C., the political capital, that opens the door for the rest of the country.”