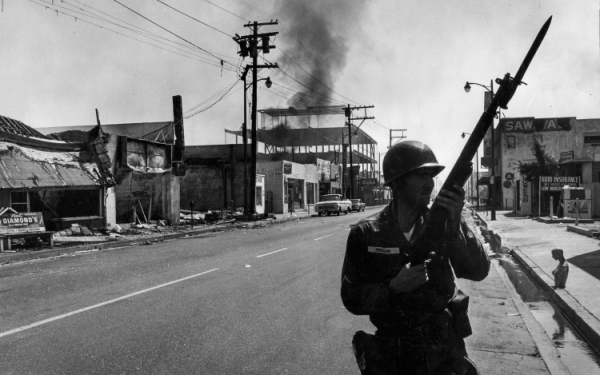 LOS ANGELES — The embers of Watts had cooled as Ronald Reagan raced toward his first election as California’s governor, a year after riots scarred southern Los Angeles.

As Reagan took on two-term incumbent Pat Brown in what was then an overwhelmingly white and culturally conservative state, Watts and other emblems of the era — civil rights battles, Vietnam War protests and counterculture elbow-throwing — contributed to a frightening sense that California was spinning out of control.

Voters reacted to the chaos by embracing a new wave of conservatism that swept Reagan into the governor’s office and paved his way to the White House. In California, the conservative tide would rise for a generation: Reagan begat George Deukmejian and Pete Wilson, 24 years of Republican governors in a 32-year stretch.

The backlash spread beyond California’s borders as well.

Two years after Reagan won the governorship, the same political winds helped propel Richard Nixon to the presidency — another beneficiary of an electorate worried about societal change and choosing the candidate who took a law-and-order approach. The Republican Party, buoyed by those put off by Democratic views on civil rights and the war, saw its ranks grow nationally.

Watts was “a turning point in a year of turning points, and one of the most important,” said James T. Patterson, an emeritus history professor at Brown University and author of “The Eve of Destruction,” a book about the American transformation wrought in 1965.

Yet, 50 years hence, the impact of Watts on California’s politics is negligible. Massive demographic changes have utterly remade the state, sweeping aside the era’s Republican gains.

In place of those who dominated the state’s politics in the years after Watts has risen a coalition of Democratic allies. They include Latinos, then such an official nonentity that their presence went unmentioned in census reports, Asian voters, socially liberal whites and African Americans — the most dependable voters on the left.

All of that was unforeseen when a traffic stop in Watts put a torch to the city.

On its own, Watts didn’t defeat Brown, the governor who swept into office in 1959 and built many of the institutions that stand today, from the California Water Project to the state’s university and college system. As the riots hit, Brown was seeking his third term, a point at which voter adulation ebbs precipitously, and the previous years had been rocky.

Student protests erupted at UC Berkeley, making it a national symbol of revolt. Brown, the father of Gov. Jerry Brown and the man who appointed the university’s leaders, bore the brunt. And while much of the activity in the burgeoning civil rights movement was occurring in the South, race reared in California as well.

In 1963, Brown had supported and signed the Rumford Fair Housing Act, which outlawed discrimination in renting or selling property. Realtors mounted an initiative to rescind it, and the initiative won the support of two-thirds of California voters in 1964. The state Supreme Court kept the issue alive politically until ruling in 1966 that the initiative was unconstitutional.

Then came Watts, a conflagration that began as the governor vacationed in Greece. By the time peace returned, 34 people were dead, a swath of Southern California was in ruins and residents throughout the state were jittery.

Reagan entered the race in 1966 with a host of proposals that would seem familiar to a national audience in decades to come: a tax moratorium for retired homeowners, a study of the state’s tax structure, the removal of judges from “the influence of partisan politics.” And he hit hard on the conflict of the era.

“Will we allow a great university to be brought to its knees by a noisy dissident minority? Will we meet their neurotic vulgarities with vacillation and weakness, or will we tell those entrusted with administering the university we expect them to enforce a code based on decency, common sense and dedication to the high and noble purpose of the university?” Reagan asked in his announcement speech.

It was “a racially laden reference to Watts that no one could possibly misconstrue,” author Ethan Rarick wrote in his biography of Brown, “California Rising.”

It was not the only time Reagan would use the line, or brush against matters involving race.

He had forcefully opposed the Rumford legislation and defended the initiative that repealed it. In a 1966 speech to the Realtors who had launched the initiative, he said the anti-discrimination act “invaded one of our most basic and cherished rights — a right held by all our citizens — the right to dispose of property to whom we see fit and as we see fit.”

Some of the people who supported the initiative “were expressing bigotry and racial prejudice,” Reagan said, but added, “I am sure that the majority did so because government was invading a constitutional right.”

In his 1980 campaign for president, Reagan kicked off his post-convention swing with an appearance near Philadelphia, Miss., where three young civil rights workers had been found dead 16 years earlier, in a famous slaying attributed to members of the Ku Klux Klan and local law enforcement officers.

Reagan’s speech segued directly from a denunciation of welfare to wording used by segregationists: “I believe in states’ rights,” he said.

Stu Spencer, the political strategist for Reagan’s gubernatorial and presidential bids, said the language used by Reagan had no racial import. “He was not a bigot in any sense of the word,” Spencer said. The 1966 jungle metaphor “was a nice dramatic statement” aimed at voters worried about rising crime, he said.

As Spencer noted, Reagan did not speak often about Watts.

“Reagan didn’t jump on it like a demagogue and milk it,” he said. “He really pointed to campus unrest. … He kept pounding it. That was the overriding issue in many ways, I have always felt.”

Still, events kept Watts in voters’ minds. In March 1966, another riot broke out in Watts; two died. And just before the November election, rioting exploded in a black neighborhood in San Francisco.

Brown broke off the campaign to tour the area, and Reagan dismissed him by saying the governor “had not profited at all from the experience of Watts and has done nothing to forestall future disturbances in possible trouble spots.”

He also returned to welfare, saying Brown’s reelection would mean “four more years of reckless welfare spending and no change in a welfare system whose only present purpose seems to be to perpetuate the dole and build a political machine.”

Brown asserted that Reagan was both “riding” and encouraging a “white backlash.”

In an appearance on “Face the Nation” a few days before the election, Reagan replied that a backlash was “nothing more than the concerns people have for … extremists in the civil rights movement taking to the streets, the use of violence, of demonstrations instead of an orderly process of appealing wrongs through legitimate channels.” And he reiterated his objections to the anti-discrimination act and his line about urban streets becoming “jungle paths.”

The San Francisco riot blunted a mini-comeback on Brown’s part, turning his long-shot effort into a rout for Reagan.

The era of violent protests and rioting deeply disturbed many Californians who had grown up in a more ordered society, Rarick said: “It was one of several things that frightened a lot of people and made them uncomfortable and thereby helped fuel the rise of the conservative movement in California.”

That same instinct toward conservatism played out in Los Angeles in the first mayoral election after the 1965 riots — when incumbent Sam Yorty turned back a challenge from Tom Bradley — and after the 1992 riots, when the more conservative candidate, Richard Riordan, was elected to lead the city. (Bradley, a former police officer, would become the city’s first African American mayor in 1973, eight years after Watts.)

“Reagan was looked upon as someone who could finally respond,” said Boris Ricks, an assistant professor of political science at Cal State Northridge who was raised not far from the riot’s epicenter. “It’s just like after the civil unrest of 1992. Richard Riordan was elected because he was going to bring order back to the city. Ronald Reagan was going to bring it back to the state.”

In the half-century since Watts, the surge of new residents has altered the political profiles of Los Angeles and California. Bradley’s 1973 election rested on coalition politics that linked African American voters with other groups; the city’s new coalition features Latinos in a far more prominent role. The same is true of California, where only 8 percent of residents were nonwhite in the census before Watts; now more than 60 percent of the state is nonwhite.

The country, in contrast, remains a far more competitive place: On the strength of the southern GOP brand developed by Reagan and Nixon — two Californians who ran law-and-order campaigns — the party owns the House and the Senate and remains competitive in the 2016 presidential contest. Not so in California, not any more.

“The state has changed so much,” Rarick said. “Once we were the people who gave Ronald Reagan to the nation. And now we elect only Democrats.”