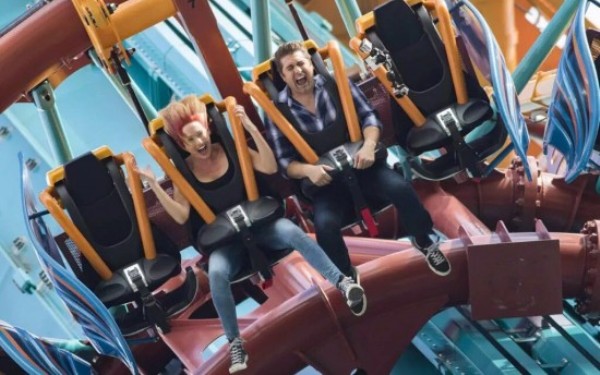 The “Thrill Factor” television show debuting this week on the Travel Channel lets theme park fans get their science on while screaming their heads off.

The new 30-minute show is hosted by longtime “MythBusters” presenters Kari Byron and Tory Belleci, who play the roles of both scientific researchers and test subjects on “Thrill Factor.”

I watched a preview of the first episode and found the fast-paced show to be custom built for coaster enthusiasts and adrenaline junkies.

The first episode focuses on the fear of falling with extended segments on the Falcon’s Fury drop tower at Busch Gardens Tampa and the Vurruckt water slide at Schlitterbahn Kansas City.

The twist on the 335-foot-tall Falcon’s Fury drop tower is that the seats swing riders into a face-down position just before the 60 mph descent.

“Thrill Factor” offers some nice behind-the-scenes moments that show how Falcon’s Fury works, from the massive counterweights inside the tower that lift riders skyward to the opposing magnets that slow down the 37.5-ton drop car.

The science that makes the show more than just eye candy comes in the form of bio-harnesses that measure heart rate and respiration and accelerometers that calculate speed and G forces. The hosts review the data downloaded from the high-tech devices as they relive their spine-tingling experiences.

The show’s segment on Vurruckt (German for insane) features amazing footage of a test raft flying off the airtime hill at the bottom of the 168-foot-tall water slide’s initial drop before the ride opened to the public.

My favorite part of “Thrill Factor” was watching as Schlitterbahn engineers modify the slide to slow the momentum of the out-of-control raft. By flattening out the bottom of the first hill and moving the second hill farther away, the engineers were able to redesign Verruckt while still delivering both 5 Gs of acceleration and moments of weightlessness.

By far the funniest parts of the first episode come during the other two segments as terrified people leap off the Shotover Canyon cliff jump in New Zealand and plummet into the Nothing but Net free-fall drop at Zero Gravity amusement park in Texas. The bloodcurdling screams and eye-popping reactions are priceless, and “Thrill Factor” plays the moments for maximum effect.