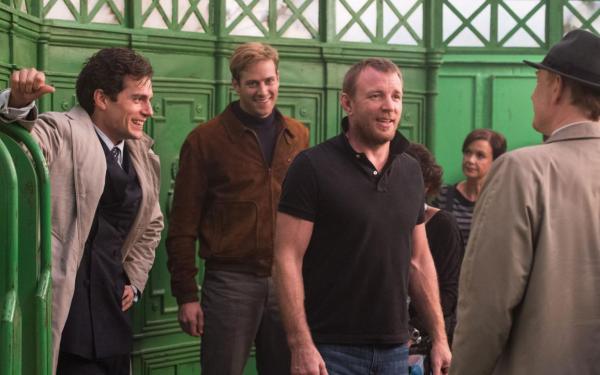 Guy Ritchie (right) on the set of Man From U.N.C.L.E. with Henry Cavill and Armie Hammer.
(Credit: Warner Bros. Pictures)

Growing up near London, director Guy Ritchie used to watch reruns of the 1960s American television show "The Man From U.N.C.L.E." The series starred Robert Vaughn and David McCallum as American and Russian secret agents teamed up under a fictional global intelligence agency.

"I loved the tone," the 46-year-old Ritchie said by phone recently from his home in England. "The masterstrokes were having a Ruski and an American working together. It was cheeky, it was slick."

The movie, from a script by Ritchie and his "Sherlock Holmes" producing partner Lionel Wigram, sets up an origins story of the duo, as they're first paired to stop a mysterious criminal organization with only one lead, the daughter of a vanished German scientist played by Alicia Vikander.

A great deal has changed geopolitically since the TV show premiered, but that didn't deter Ritchie or Wigram from staying firmly planted in the 1960s, an era of style and espionage fiction they admired, including the period's James Bond films, Ritchie said.

"That was the golden era of the spy genre," Ritchie said. "I liked the birth of it all, the gizmos, the great clothes. We created what I like to remember in hindsight was the best of the '60s."

Asked whether he thought the unlikely partnership had as much tension more than two decades after the conclusion of the Cold War, Ritchie said he thought U.S.-Russia relations still had some drama to mine.

"We're sort of back there again, aren't we?" Ritchie said. "But I think that's secondary rather than primary. You just need to set up conflict between A and B."

Ritchie, who burst onto the scene with his fast-paced 1998 heist movie "Lock, Stock and Two Smoking Barrels" and cemented his box office might with the two "Sherlock Holmes" films starring Robert Downey Jr. and Jude Law, excels at scenes of masculine banter. (He's also pretty chatty himself.)

To cast his leads — who have previously starred as Superman (Cavill) and the Lone Ranger (Hammer) — Ritchie relied on a kind of theory of pub chemistry.

"I looked for people that would get on off- and on-screen, who could harmonize in some way," Ritchie said. "You need to have chats about anything else other than the character. I usually end up asking whether you like thin-cut marmalade or thick-cut marmalade. I wanted them to have a kind of affinity that was as if they fell out of different trees in the same orchard."

The result meant casting the English Cavill as an American and the L.A.-born Hammer as a Russian, a choice that kept multiple dialect coaches employed.

"The next time I might liberate myself from that challenge," Ritchie said of forcing actors to work outside their native accents. "All the little duck feet that are paddling under that water — it's tough."

And to be sure, Ritchie's next movie, "Knights of the Roundtable: King Arthur," which is due in 2016, stars English actor Charlie Hunnam in the title role.

The director has been shooting it in the U.K. this summer, a busy time that also included getting married to his girlfriend, model Jacqui Ainsley, and holding "The Man From U.N.C.L.E." premiere at their wedding. At the event, which the couple held on the grounds of his sprawling English countryside estate, guests traded their formalwear for onesies to snuggle up and watch the film outdoors.

Why Dr. Dre's 'Compton' is not a post-Ferguson album, and how it asserts the dominance of L.A. hip-hop