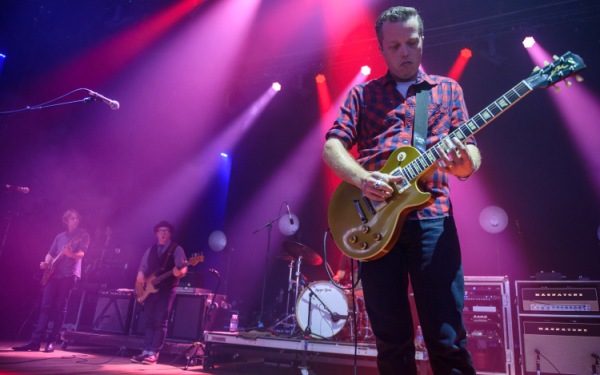 Born just outside the storied music crucible of Muscle Shoals, Ala., the 36-year-old Jason Isbell has been regarded as a songwriter’s songwriter since gaining wide acclaim with Southern rock band the Drive-By Truckers. Since leaving the band in 2007, Isbell has released three albums before his breakthrough in 2013 with “Southeastern.” A gripping, unflinching portrait of his path to sobriety and lives on the edge of destruction, “Southeastern” was named album of the year at the Americana Awards in Nashville, where he now resides.

Last month, Isbell released the follow-up, “Something More Than Free.” Chronicling lives at a crossroads as well as a fragile domestic bliss, the record debuted at No. 6 on the Billboard chart in its first week while topping its rock, country and folk charts.

Isbell recently spoke over the phone with The Times about his writing process, his active — and very funny — Twitter presence and the complexity of being Southern in 2015.

Q: A lot of the coverage surrounding “Something More Than Free” is hailing you as one of the artists who are “saving country music.” Do you identify strongly with that genre?

A: I certainly don’t identify with what’s been called country music for the last few years. But I identify with that tradition, and I think if John Prine made country music, then I probably do, or Kristofferson or folks like that. That’s the kind of thing that I really affiliate with. But, yeah, country music is a term that’s a little bit dated because it doesn’t really represent all of us. To some, it means the things that are being played on the radio, then to people that are a little bit angrier, it means something that reminds them of Willie and Waylon and Merle. They’re going to have to come up with some new terms for it at some point.

Q: This record is different than your last. It’s even upbeat in spots. Were you intentionally going for a different feel after “Southeastern”?

A: I didn’t set out to do that. It just came about as a result that my life is better and I’m more comfortable than I was when I wrote “Southeastern.” I think that made it a little bit more of a joyful record this time around because I had figured out how to live in the world a little bit better.

Q: The attention to detail in your songwriting is what really draws me in — for instance, how you referenced Sylvia Plath’s “The Bell Jar” in “The Life You Chose.”

A: Oh, yeah, the details are always what’s most important to me. And when I mention a detail like that in a song, I visualize a specific person. When I think about “The Bell Jar,” I think about one particular girl that I knew who sort of molded herself after Sylvia, which probably wasn’t the best idea. But that’s how I keep things relatable. I use details that are real and situations and I use those to create characters. Then I try to let those characters behave naturally.

Q: It’s striking how few words you need to get those vivid descriptions across in songs. How does that come together?

A: There is quite a bit of editing. You know, I think I’m probably more of a sculptor than a painter. I look at it like you can start with a lot and wind up with a little or you can go the other way around with a blank canvas and add to it. But most of that is chopping pieces away until I get down to a language that’s very conversational and still has some poignancy to it.

Q: On another writing front, you have a pretty active Twitter presence.

A: I like it because we have a lot of time on the road and there’s a lot of waiting around, and that particular platform allows me to participate in that conversation as much or as little as I want to.

It reminds me of a huge table at a family Thanksgiving meal. Sort of the way I was when I was a teenager, I would not say much, I would keep my mouth shut until I thought of something that was really, really hilarious. I would speak up, and then I would go back to being quiet the rest of the meal. It’s good for that because there’s just a lot of things rattling around in my head. I have a lot of reactions to the outside world that I don’t feel like would be appropriate for songs, things I’m not interested in writing about, things I don’t want to think about any longer than 15 or 20 seconds. It’s nice to be able to get those things out.

Q: The South and the Confederate flag have been in the news of late. You, the Drive-By Truckers and Kacey Musgraves are often among those held up to stand for the South in some way. Is that an uncomfortable spot to be in, or are you happy to do it?

A: It’s not any more uncomfortable now than it was when I was 15 years old. I’ve always known that there are conflicting issues going on where I’m from. It’s always been that way. The interesting thing to me now is that the rest of the world is just starting to figure out the complexity that’s involved in being an open-minded person who grew up in the South.

For me, the things like the Confederate flag — I just don’t think that it does anybody much good, and it certainly causes a lot of people a lot of pain. I can understand how people want to affiliate with something ... something to be proud of. But I think maybe affiliating with your family might fill that hole a little bit better than affiliating with a bunch of (Confederate) soldiers, most of whom died of diarrhea.

Q: That does take some of the romance out of the war and the argument.

A: It’s the truth! More people died of diarrhea than anything else. It’s like, “My great-great-great-grandfather fought to keep the South free from Northern aggression!” No, he didn’t. He died (soiling) himself in a ditch in Virginia. ... That flag would’ve had a whole different use to somebody who was dying of diarrhea.”