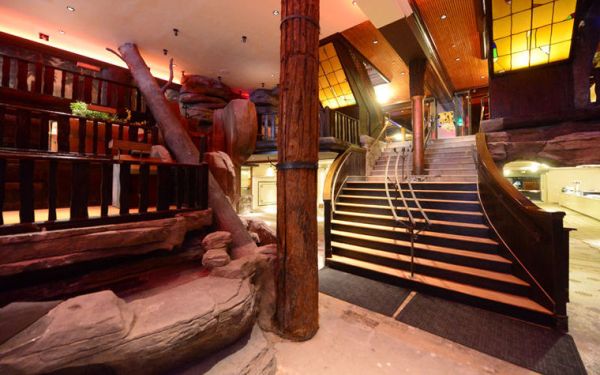 For nearly four years, Clifton's cafeteria has been hidden behind black wooden barricades as Andrew Meieran, a local developer with an obsessive streak, has reimagined the downtown Los Angeles culinary institution, probably better known for its kitschy forest-themed dining room than its comfort food.

The renovation, supposed to last just a few months, stretched on and on as Meieran traveled the world and hunkered down before his computer late into the night to acquire the perfect tchotchkes.

When the restaurant finally reopens next month, patrons will find a three-story atrium has been carved into the building — where they will encounter a 250-pound meteorite perched on a Gothic-style bar fashioned out of a century-old church altar from Boston.

That's just for starters. Walk downstairs, and hiding behind a sliding shelf is a speakeasy furnished with tables made of giant slices of sparkling geodes. Visible under the glass floor is a nest of real dinosaur eggs, which were scanned to reveal the skeletons of baby brontosauruses.

In every direction, on every floor, there is something unusual to see, including machinery dating from the 19th century, elaborate murals and wildlife habitat displays — even a 9-foot-tall woolly buffalo.

Remember Clifton's?  We want to hear your tales and see your old photos – post them on Twitter with #CliftonsLA, on our Facebook page or in the comments and we'll round up our favorites on Monday.

By using #CliftonsLA you are giving the Los Angeles Times permission to use your photo on all L.A. Times platforms and you agree to abide by our terms of service.

In short, Meieran, who transformed a former power station on 2nd Street into the hip industrial-Victorian Edison bar, probably won't disappoint a downtown crowd wondering what he has been up to all these years.

"We have been waiting in great anticipation for this because we knew the sale and scope of what it would be," said Blair Besten, executive director of the Historic Core Business Improvement District, who's had a peek at the restaurant.

The relaunch of Clifton's marks the comeback of a once-popular institution dating to 1935 that sold as many as 15,000 meals a day when Broadway was the city's entertainment hub. It served traditional cafeteria food such as pot roast, mashed potatoes and Jell-O in a woodsy grotto among fake redwood trees and a stone-wrapped waterfall reminiscent of Brookdale Lodge in Northern California.

"Clifton's is one of our legacy restaurants. It has personal meaning to people because they had a good time there with their parents and grandparents — and it's magical," said Linda Dishman, president of the Los Angeles Conservancy, who hasn't seen the redesigned restaurant.

"People can be obsessive about every feature but get lost in the weeds," she said. "Andrew understands why people respond to interesting historic places and how to maximize that."

Among its devotees was Walt Disney, who visited with his young daughter Diane. When Ray Bradbury was a struggling young writer, he took advantage of Clifton's charitable policy forged in the Great Depression that let down-on-their-luck diners pay little or nothing. More recently, before its closure, Clifton's attracted some of downtown's young new residents. During one monthly Art Walk, director David Lynch discussed his work in a session at Clifton's.

With that potent legacy in mind, Meieran, also a filmmaker, set out to preserve the signature cafeteria while adding layer upon layer of his own creations — and turn Clifton's into a downtown hot spot. He knew he wouldn't be forgiven if he ruined the Clifton's many hold dear.

"It's a humbling project," Meieran said. "Everybody has ownership, their own take on Clifton's from the 1930s on."

Part of his challenge was to decide which era of Clifton's long history he should preserve. Meieran elected to go way back, removing the 1960 metal facade and clearing out more recent interior additions to the ground floor. In the process, he uncovered rock grottoes dating to the 1930s and hand-tinted photos of California scenes near the entrance that had been concealed since 1939.

In the basement, he even found a working neon light that probably had been burning since the restaurant opened, when founder Clifford Clinton converted the former Boos Bros. Cafeteria to forest-themed Clifton's. The light in a restroom was used to illuminate a hand-tinted transparency of a woodland scene from behind.

SIGN UP for the free California Inc. business newsletter >>

Clifton's Brookdale, as it was once known, was part of the Clinton family's cafeteria empire, which had a 79-year run that ended with the sale of a long-term lease to Meieran in 2010. In a nod to Pacific Seas — one of the chain's 11 restaurants that closed in 1960 — the revamped Broadway site will house a Polynesian-style bar. It will share the fourth floor with a restaurant. The two will be separated by an Art Deco-flavored "map room" decorated with images from the golden age of air travel painted by Los Angeles artist Sammy Beam. He also painted three-story murals of Yosemite Valley and the Muir Woods in the new atrium.

Clifton's will have two restaurants, including the cafeteria, and five bars. In the basement bar, ice sculptors will carve frozen blocks in a glassed-in freezer. Newly hired executive chef Jason Fullilove, formerly of Malibu Pier Restaurant & Bar, is still finalizing the menu.

Meieran is best known for the Edison, a fanciful bar that he built in the remains of an early 20th century power plant. Among its unusual elements are old Staten Island Ferry searchlights and electrical insulators from the 1890s. He's also restored and expanded Charlie Chaplin's estate in Beachwood Canyon and renovated several historic office and apartment buildings.

But his Clifton's revamp is perhaps his most elaborate project, and it's come with a toll. During the time he has been working on it, he was divorced and a great-uncle and uncle both died. Acquaintances interested in the project, including Bradbury and Diane Disney, also passed away.

"This has been a very tough personal time for me," said Meieran, whose day job included co-writing and directing "Highland Park," a 2013 movie starring Danny Glover and Parker Posey. He also helped develop the 2014 Tim Burton movie "Big Eyes" and is working on a biopic about "Twilight Zone" creator Rod Serling.

"I have a passion for storytelling in film or in actual spaces," he said "It's about the narrative elements of history and design."

The Clifton's project ran over deadline and over budget as Meieran struggled to renovate and redecorate the 109-year-old building. He first hoped to invest a few million in improvements while keeping the cafeteria open. But he closed the place in 2011 and has spent about $10 million so far.

He considers that amount low, because he personally tracked down pieces, such as a 1935 Art Deco-style soda fountain and a Chris Craft mahogany runabout boat from the same era. Meieran found both on EBay. He logged hour upon hour scouring the Internet.

"I search while on airplanes, in random hotel rooms, even on beaches," he said "Wherever there is access to WiFi, I explored the Internet for interesting curiosities."

In the process, he connected with niche online communities. That's how he located wood from a naturally fallen 1,700-year-old Sequoia redwood tree that was carved into a bar and a piece of ancient bristlecone pine that is now a tabletop. He picked up other bits in a Parisian flea market.

Clifton's is set to open in phases starting Sept. 17, with the last portion, the Pacific Seas bar, targeted by Halloween.

The Clifton family, meanwhile, is waiting to see what has become of their famous enterprise.

"We don't know much," said Pasadena physician Edmund Clinton III, who has written a soon-to-be released book on his grandfather's life. "We're all very interested to see what they have done with the place."

Blog
There’s a $1,000 steak served in a box at this Miami Beach restaurant. We have questions
1,687 views

Blog
Keto vs. Mediterranean diet: Which is the best choice for diabetics?
663 views