Jason Derulo on his 'Think You Can Dance' gig: 'It'll give people an idea of who I am' 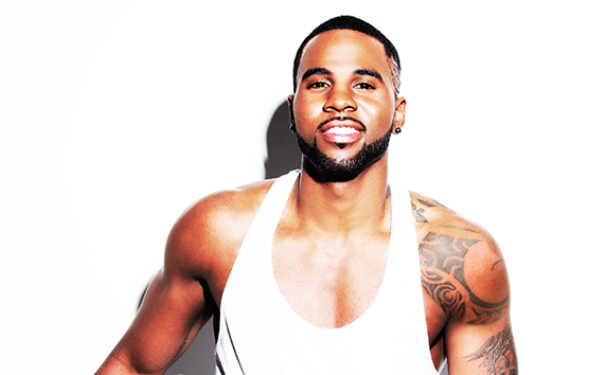 Jason Derulo knows that when performers agree to appear as judges on televised competition shows — "American Idol" and "The X Factor," for example — it's because they're likely "on a downward spiral and they're trying to pick themselves back up."

But Derulo, the muscled pop singer responsible for a string of unavoidable Top 40 radio hits over the last half-decade, was hardly circling the drain when he was offered a spot on the current season of Fox's "So You Think You Can Dance." His lewd 2014 single "Wiggle" had just been certified for sales of more than 2 million copies, and his latest track, "Want to Want Me," was well on its way to becoming one of the songs of the summer.

So why'd he take the gig?

"Two reasons," said the 25-year-old Monday afternoon before shooting this week's episode. "No. 1, I'm in love with dancing, and hopefully these dancers can take what I say and come back better than before." (Well, OK.) "And also I thought it would help give people, y'know, an idea of who I am."

Ah, yes — that. For all the chart success he's had since debuting in 2009 with "Whatcha Say," which topped Billboard's Hot 100, Derulo hasn't exactly established himself as a charisma machine ... la Jay Z or Taylor Swift. The songs were well constructed but seemed to have a hole at the center; they felt as though they could've been by anyone, even if Derulo, a lifelong songwriter, co-wrote them.

Derulo's manager, Frank Harris, who has overseen the singer's career since Derulo was a kid growing up in Miami, said hits like "Whatcha Say" and "In My Head" exploded so quickly that "the records got out ahead of Jason. It became about the song, not the artist."

Yet that began to change last year with "Talk Dirty," a bawdy — and much more distinctive — track featuring the rapper 2 Chainz that framed Derulo as a willing sex symbol with a frisky sense of humor. He put additional personality into "Want to Want Me," a song big enough that Taylor Swift brought Derulo out to sing it at a stadium show last month.

"Jason's catching up to himself, putting a face to the voice," said Lars Murray, an executive at the popular music-streaming service Pandora, which booked Derulo to headline its Summer Crush concert Saturday at L.A. Live. "I'm sure his record label would say they wanted that to happen all along. But now we're really feeling it."

Sitting in an air-conditioned trailer outside the "Dance" studio as a barber shaped up his hair, Derulo acknowledged that his early material (which followed songwriting work he'd done for established acts, including Lil Wayne and Pitbull) emphasized catchy hooks over any identifiable point of view. That was partly because of timing, given that Derulo emerged just before the social-media era; back then, a pop star could get by without broadcasting his entire existence. But the singer said his initial blankness was also a product of youth.

"It's not easy to jump into something and just be yourself, as weird as that sounds," he said. Inside the trailer, he watched an episode of the HBO series "Ballers" on a widescreen TV while half a dozen gold necklaces sat on a countertop awaiting Derulo's perusal. "You need experience, and I feel like I'm getting more comfortable with it as time progresses."

His growing confidence is apparent on "So You Think You Can Dance." At the beginning of the season, Derulo had little to say to contestants beyond bland variations on "Good job." On Monday, though, the singer told one dancer attempting an unfamiliar hip-hop style that he "wasn't even in the ballpark." The studio audience was quick to boo.

"Oh, trust me, I get hate mail," he said before the taping. "But I welcome it, man. It just comes with the territory."

His music is getting livelier too. Derulo's latest album, "Everything Is 4," which came out in June, bounces from slick pop tunes like "Cheyenne" to harder-edged R&B tracks like "Love Like That." And then there's "Broke," a deeply wacky country-rap mash-up that features Keith Urban and Stevie Wonder.

The need to mix things up comes directly from Derulo, according to Charlie Puth, who produced "Broke" (and had a huge hit of his own this year with "See You Again," his duet with Wiz Khalifa). "Jason is there in the creative process right from the start," Puth said, "unlike a lot of other artists who [tell producers], 'Do whatever you want to do — I'm just gonna show up and sing it.' We spent months working on this song."

The attention to detail extends to other realms of his career. Harris, Derulo's manager, said he and the singer are looking closely at opportunities in technology and apparel; the two also recently announced they'd launched a joint-venture label with RCA Records.

"I say this humbly: We know how to make hit records," Harris said. "What's important now is branding opportunities."

As that statement suggests, there's a calculating quality to Derulo's approach, which certainly makes him no exception in pop music. Asked whether his track record of popular singles makes people more likely to give each new song a chance, he answered by saying that, yes, radio program directors depend on him to deliver hits now.

"Even if it's a song they're not necessarily into," he went on, "they're like, 'I trust Jason. I've been wrong before, and he keeps doing it over and over and over again.' "

The numbers don't lie. Pandora's Murray said Derulo recently passed 2 billion plays on the service, a "very strong" figure that puts him in the company of "a lot of big, big names."

Mulling his options, Derulo said that after recently collaborating on a song with the Dutch DJ Hardwell, he's interested in moving further into electronic dance music.

"The EDM world is absolutely crazy, man, and I feel like I belong in that craze," he said.

Given how many other pop singers have dabbled in dance music lately, this might be low-hanging fruit for Derulo. But Puth cautioned against underestimating the singer's savvy.

"This is a guy who knows every hip song at any moment," the producer said. "He's the one that said to me a month before it happened that deep house was going to replace progressive house as the popular thing."

And EDM is just one of the routes Derulo is considering. Earlier this week he teamed with Luke Bryan, the reliably game country star, for a version of "Want to Want Me" that quickly racked up views after they posted it online. He wants to make hip-hop records too.

"It's about taking chances," Derulo said. Then he did something perhaps no other human ever has: He quoted a speech given at this year's instantly forgettable iHeartRadio Music Awards. "Like Justin Timberlake said, 'Dare to be foolish.' "

Big Sean has a surprising method for dealing with fame

Joss Stone explains the worldly influences on 'Water for Your Soul,' her new album