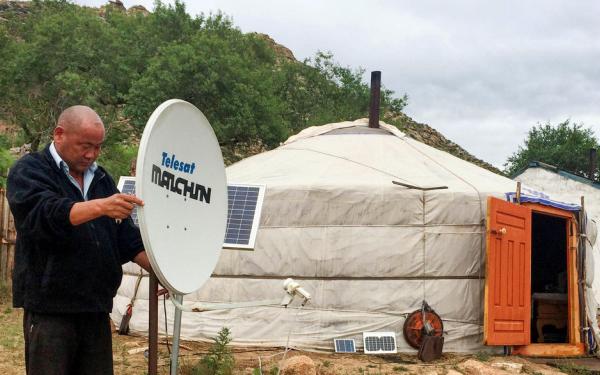 KHOGNOO KHAN, Mongolia — Deep in a desolate, rocky canyon, about 10 miles from the nearest paved road and even farther from any power line, Altai Davaa and her brother, Tsagaana, eke out a simple life. They sleep in a traditional Mongolian yurt, cook over a wood-fire stove, burn animal dung for fuel and use an outhouse. Every morning, she milks her cows.

But when the sun starts to set behind the ruins of a small Buddhist monastery uphill from their encampment, Tsagaana grabs the power cord from his mini solar panel, plugs in his satellite dish and TV, and starts channel surfing. He gets more than 60 stations, offering everything from “Breaking Bad” to Hollywood blockbusters.

“But mostly, I like Mongolian programs,” he says. “They’re easier to understand.”

On that front, he’s hardly starved for choice either. Despite having just 3 million inhabitants scattered over an expanse about four times the size of California, Mongolia has 138 homegrown television stations — 80 percent of them founded in the last 10 years.

They air everything from wrestling tournaments to news and political talk shows, real estate showcases, home shopping programs, the Miss World Mongolia pageant and even the Mongolian Academy Awards.

Since embracing democracy and capitalism in 1990, formerly communist Mongolia has become a dynamic outpost of media choice sandwiched between autocratic Russia and China, where authorities keep a tight rein on the press. Mongolia’s smorgasbord of options — the nation also has 111 newspapers, 90 magazines and 72 radio stations — is stunning given that 25 years ago, viewers could see only the state-run Mongolian National Broadcaster and a Russian station.

The country has shot up the World Press Freedom Index compiled by Reporters Without Borders, rising from No. 100 in 2012 to No. 54 this year — just five spots behind the United States.

But journalists, station managers and civil society groups say those impressive statistics mask deep problems, particularly in television, the dominant medium. Politicians and businesspeople bankroll and control many of the stations, using them to tout their interests and tar their rivals, but it’s hard to know exactly who owns which platform.

The proliferation of channels and the small population mean there’s hardly enough advertising money to go around, so many stations have for years pirated content from Hollywood and elsewhere, quickly dubbing the hottest films and TV shows into Mongolian and sending them out in prime time.

“If you look at our laws, and our number of outlets, you’d think, oh, we have great media freedom,” says Naranjargal Khaskhuu, a former journalist and head of the civil society group Globe International. “But if you look into it, we have lots of problems hiding.”

After decades of strict limits on expression, Bayarmagnai says, the scramble to the airwaves was only natural. “Suddenly, we had freedom of speech. That’s very appealing to Mongolians; we like to express our thoughts and opinions.”

Politicians quickly became involved in the press, and vice versa. The current president, Tsakhiagiin Elbegdorj, was founder of the country’s first independent newspaper, Democracy, and was its first editor in chief. He also was involved in establishing Eagle TV, the first private TV station, in 1994. Prime Minister Chimed Saikhanbileg, meanwhile, is a former television host whose catchphrase, “Don’t change the channel!” still rings in the ears of many Mongolians.

Oyundari Tsagaan, who earned her master’s degree in journalism at the University of California, Berkeley and is general director of Mongolian National Public Radio and TV, says politicians want direct megaphones to reach the masses and are reluctant to give them up even if they don’t know how to make the platforms professional or profitable.

“I know one of my political friends who owns a TV station. … He said, ‘I don’t know how many people watch my TV; I have no idea. But all of my PR advisers told me I have to have some media network. That’s why I’m having these stations.’”

Oyundari is no outsider to politics. She began her career as a field reporter for the Mongolian National Broadcaster, but in recent years served as secretary-general of the Democratic Party. “Some people say, ‘The Democratic Party appointed you to this position.’ I say, ‘No, I used the Democratic Party to get appointed,’” she said. “It’s difficult for professionals to go up in the field without getting involved in politics.”

The public broadcaster is headquartered in a hulking socialist-era concrete building on a dusty hill on the western side of Ulan Bator, the capital; it’s easily identified by the giant antenna looming over it. Inside, paint peels in the dimly lighted hallways and the shabby stairwells.

Since taking the helm, Oyundari says, she’s put her foot down on airing pirated programs and tried to get journalists to stop self-censoring and accepting payoffs. But change is hard: Mongolia’s mining-fueled economy has slowed in recent years, and the government has cut funding; the broadcaster has laid off 100 people this year.

Bribery is “a habit for some people,” she says. “We can’t really control everybody.”

At least one channel has taken a more activist approach to the problems. News reporters at Mongol TV, a private station that launched in 2009 and has been outspoken about issues of bribery and piracy, conducted what Chief Executive Nomin Chinbat calls a “social experiment,” exposing rivals’ less-than-scrupulous journalism with a prank that would have made Ashton Kutcher and his “Punk’d” crew proud.

Posing as businessmen, journalists at the station contacted nine rival media outlets and told them that McDonald’s was planning to open its first restaurant in the country near the capital’s central Genghis Khan square, serving up “McMutton” burgers and goat’s milk shakes.

They offered to pay the outlets a few hundred dollars to run the story. Despite some hints — the fake news release identified a key McDonald’s official as Mr. P. Rank, for instance — the rival outlets, including the Mongolian National Broadcaster, ran with the “news” without checking facts. On its late evening newscast, Mongol TV aired an expose on the setup.

The incident caused a tempest in media circles.

“People have attacked our other businesses, and … a lot of journalists said we were unethical to expose this. They said: We’re in the same industry and we should protect each other,” says the British-educated Chinbat, sipping coffee in her penthouse office in Mongol TV’s modern headquarters near the square.

But the incident prompted more dialogue about journalistic ethics; in January, Chinbat was selected as chairwoman of the newly established Media Council of Mongolia, a nonprofit professional group that aims to raise the standards of news outlets and vet complaints.

There are other signs of maturation too: Bloomberg has opened an affiliate financial TV network in Ulan Bator sponsored by a local bank, and more stations are paying for the rights to foreign programs or shifting to producing their own local content.

The quality of Mongolian dramas has improved greatly in the last few years, says Ben Moyle, the former CEO of Mongolia’s Channel One. But dramas are relatively expensive, so stations including Channel One have looked to reality, news and variety shows to keep costs down.

Channel One now has a popular “bus” program, with local notables being interviewed on city buses; a kids’ show featuring a talking pony and celebrities; a Friday night music show sponsored by a local beer company; and a program called “Desert Island” on which guests discuss what songs they would want with them if stranded alone.

Mongol TV has bought popular U.S. shows, including “Prison Break” and “The Good Wife,” and for the last two years has even aired the Oscar telecast live. The awards broadcast, says Chinbat, commanded top advertising rates — $10 per second — and netted the channel its highest morning viewership.

But without significant consolidation in the sector — forced by either the market or regulators — graft, piracy and other problems are likely to persist.

“I think the government is content to keep the number of outlets high,” says Moyle, who’s now a consultant to Channel One. “Politicians are the winners when journalism is poor.”