As room and board fees rise, students look for cheaper housing 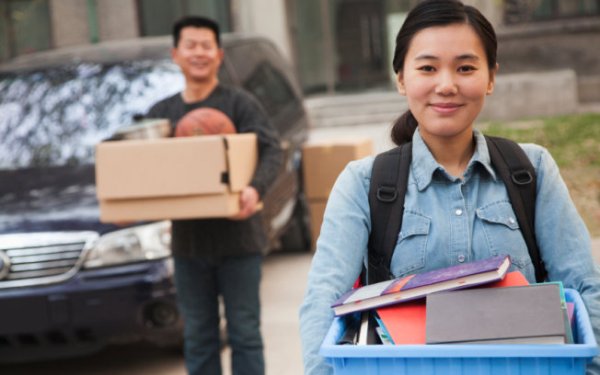 LOS ANGELES—When he moves off campus this fall, University of California, Los Angeles junior Will Van Der Wey said, he will miss the variety of dining hall meals. His homemade sandwiches just aren’t going to be as appealing. But even if his food options shrink, his budget won’t.

After sharing dorm rooms for two years, he is moving to a two-bedroom apartment in the Westwood area that he said will offer the chance to live and eat more cheaply, and have more independence from university-controlled housing. With rent shared by three friends and lower food costs, he anticipates saving about $2,000 by next summer, even after having to buy some second-hand furniture and dishes, silverware and glasses.

“Given the cost of tuition, a lot of students are eager to look for ways to save money. If moving off campus is a cheaper alternative than the dorms, that alone is enough to justify the decision,” said the biology major from San Jose.

Many students at public and private colleges across California and the nation are facing such decisions as the average costs of room and board are rising at rates double that of general inflation. Those higher living costs are increasing student debt and, experts say, leading students to enroll at commuter schools instead of out-of-town options that might be a better academic fit.

In California, housing and food costs on most campuses continue to rise without the public attention given to tuition hikes. After political maneuvering and student protests, in-state tuition for University of California and California State undergraduates won’t increase for the next two years, continuing freezes implemented three years ago. But on-campus room and board can outweigh tuition at many of those schools.

Room and board bills have been steadily increasing between 2.5 percent and 3 percent a year at many schools across the country, according to Tom Ellett, former president of the Association of College and University Housing Officers — International.

“Electricity goes up, water prices go up, union salaries go up and you have to worry about deferred maintenance,” said Ellett, senior associate vice president of student affairs at New York University, where he helps oversee dorms. In addition, he said, costs are boosted by new dorm construction and amenities, such as gyms or kitchen upgrades, that colleges add to compete with other schools.

Living costs in Southern California tend to be high. For example, the national average cost of room and board at private four-year colleges was $11,188 last year, according to a College Board survey. This fall, costs for living in a double room with a meal plan for the full school year at the University of Southern California and Loyola Marymount University will be about $13,800, and about $14,200 at Occidental College, according to published rates.

Room and board bills at UCLA have risen about 2 percent in each of the last two years, a pattern that will continue “for the foreseeable future,” according to Peter Angelis, assistant vice chancellor for housing and hospitality services.

UCLA has been renovating many of its dormitories, and the financing for those current and future projects, along with regular operating expenses of dorms and dining halls, are reflected in students’ bills, he said.

“I definitely sympathize about anything that puts additional pressure on a parent or a student paying their way through the university,” Angelis said.

But because the state does not fund construction and operation of dorms, he said UCLA must prepare for the residential needs of students decades ahead of time. He also said that dorm inflation is modest compared with jumps in rents for private housing around Westwood.

Among their many options, UCLA students this year can pay $11,436 for a bed in a triple and a food plan providing 11 meals a week, or $14,090 for a double room and 19 meals a week. (UCLA estimates that a student can reduce costs by about $4,000 by living off campus in an apartment and, of course, can cut costs much lower by living with family.)

Tuition and basic fees at UCLA are estimated to be $13,251 this fall.

Financial aid at many colleges and universities can help cover tuition as well as room and board if students prove a qualifying need. But for those who don’t get enough aid, living costs are “a real issue, a huge issue,” said Sandy Baum, a research professor at George Washington University and college pricing expert who consults for the College Board.

Despite the cost increases, UCLA sophomore Dalia Gonzalez is staying in a triple dorm room for a second year. UCLA says it has enough rooms to guarantee a spot in university housing through at least a student’s third year.

She acknowledges that it will be more expensive than living off campus. But Gonzalez said she enjoys the dining hall food and exercising in the gyms, and is happy to have the academic support of the dorm’s writing centers.

Besides making it easy to meet new friends, dormitory life allows students to concentrate on their studies without the hassles of off-campus life, she said. “You don’t have to worry about cooking, cleaning and paying your own utility bills,” said Gonzalez, who receives financial aid.

The University of California, Berkeley is freezing most of its room and board charges this year after raising them about 3 percent last year. Its costs, at $14,388 for 2015-16, already are among the highest in the UC system, in part because its buildings include some of UC’s oldest and need seismic retrofits and other renovations, officials said.

Veronica Barron of Buena Park said that as a UC Berkeley freshman last year she loved living in a triple in a high-rise dormitory, describing it as “one of they best experiences you can have.” But she decided to move off campus this year, stretching what she receives in financial aid, loans and work income.

Her share of the rent will be $700 a month on a yearlong lease. She will be eligible for food stamps and expects to reduce her overall living costs by about $2,000 from the $12,700 she paid for campus room and board last year.

“You have more control over your food costs,” and you don’t have to adjust your schedule to dining hall hours, she said.