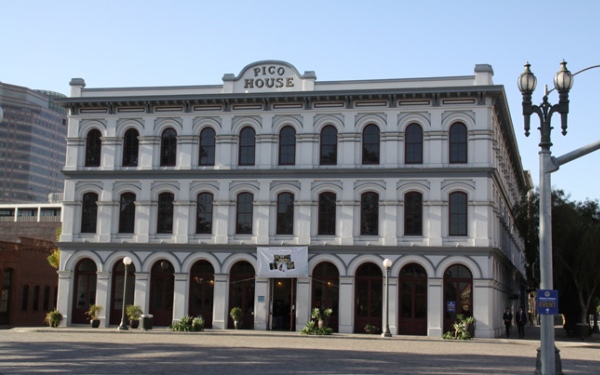 What can we learn about Los Angeles history from an object that looks like a metal plunger, or maybe a large cooking pot, with a pipe rising out of its lid?

"It's a great conversation starter," says David Boulé. "If you stand next to it, half the people say, 'What is this?' "

The other half know right away.

Boulé contributed the smudge pot — an oil-burning orchard heater — to an exhibit that runs through the end of the month at the Pico House in El Pueblo de Los Angeles.

"History Keepers: Storied Objects from Los Angeles Collections" is the work of the California Historical Society and L.A. as Subject, a research collective dedicated to local archives.

In June, the society asked L.A. as Subject's members to offer up objects that told interesting stories about Los Angeles.

In came paintings and photographs and protest posters and Boulé's smudge pot.

That it's big and sturdy is part of why he chose it from his citrus-themed collection, he said. It also hearkens to a pivotal time when Southern California citrus was king.

In the 1930s, with orange farming at its peak, Boulé said, the CBS national radio broadcast would be interrupted in L.A. at 8 o'clock each night for an update on the temperatures in citrus-growing communities. When the numbers threatened to drop below freezing, "armies of men, women and children of all ages and all sizes and description would gather. They would bring out the smudge pots and the oil and they would be up all night."

There was a time just about anyone in the city would have recognized a smudge pot, Boulé said, and recalled the "black, acrid smoke" the heaters spewed before air-quality restrictions and wind machines began to edge them out in the 1950s.

But people come and go here, and memories of that kind fade away.

"History Keepers" is a way not just to introduce visitors to more of L.A.'s past, but to show them how much material has been preserved and remains available for study.

Some cities wear their histories on their sleeves. You can see it all around you, in buildings and landmarked sites.

"Here you have to work harder," said Jessica Hough, one of the exhibit's curators and the director of exhibitions for the historical society.

"I hope that people coming in off the street will begin to get a sense that there is this cache of treasures that is spread all across the city and cared for by different kinds of institutions: by universities, by private museums, by individuals in their homes," she said. "These things are part of our cultural past and our history. They help to tell our story."

That they are on display at Pico House, right across from Olvera Street, is an added bonus.

The imposing Italianate building, with its arched windows and doorways, was built by Pio Pico — last governor of California under Mexican rule. When it opened in June 1870, it was the city's first three-story building and grand hotel.

But it's a place many people who live here probably drive by without noticing, dismissing much of El Pueblo as stuffed-burro, sombrero tourist kitsch.

Joining the smudge pot at the Pico House are an eclectic assortment of items: a downtown L.A.-themed pinball machine, some crumbling brick, a set of society calling cards, a digitized version of Spanish-language folk songs originally recorded on wax cylinders.

The brick comes from the Zanja Madre, or Mother Ditch, which carried water from the Rio Porciuncula — the L.A. River — to the Pueblo de Los Angeles from the settlement's founding in 1871 until 1904. The item came from the City Archives, which also contributed a voucher for the water keeper, or zanjero, that shows just how important water was even in the city's earliest days. The zanjero, notes the label, was Los Angeles' highest paid employee, with a salary matching the mayor's.

The exhibit is free — as is play on the pinball machine on loan from the Studio for Southern California History. The game's alleys are the 110 Freeway, and lost balls head to the 10 West.

The label beside it echoes the drive behind the exhibit.

"In some ways," it reads "the game represents how we travel on the freeways — often missing some of the most special parts of our beloved city."