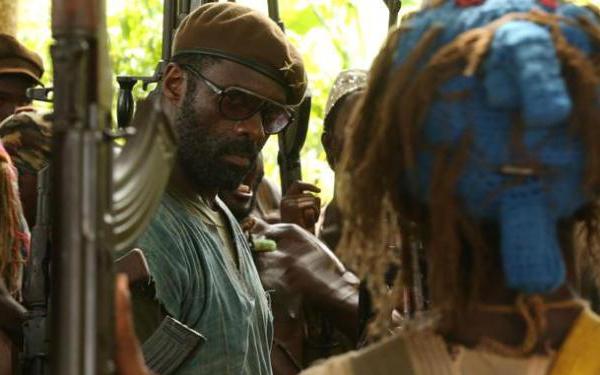 Idris Elba in Beasts of No Nation
(Credit: Netflix)

Netflix continues to make inroads in the movie space. Last week it announced it had acquired “Mascots,” a new movie from Christopher Guest about, well, just that. And this fall it will release Cary Fukunaga’s new movie, “Beasts of No Nation.”

But as it seeks to compete in the awards space with a movie like “Beasts,” Netflix, which has taken a much harder line on traditional theatrical plays than even competitors like Amazon, has raised as many questions as it’s answered.

The child-soldier drama had plenty of awards-season buzz given its topic and directorial pedigree. It also stars Idris Elba. But Netflix is new to the feature game, and when it acquired the film for a reported $12 million it had industry insiders asking: How much of a theatrical push would the movie receive, and in what way?

The issue grew more fraught last spring when many theater chains said they would boycott the movie’s release. Their move cut right to the crux of the windows issue (basically, how much should Hollywood keep in place a system in which filmgoers are required to see a movie in theaters early in its run instead of being given the chance to see it via various on-demand technologies like Netflix?).

The variables have now begun to come into focus. The Toronto and Venice film festivals have said they would screen the movie as part of their regular mix of big theatrical award-season hopefuls.

And this month, Netflix laid out its plan, revealing that it has struck a deal with the Landmark theater chain and new specialty distributor Bleecker Street to release the movie in theaters (about 20, in the nation’s biggest cities/art-house markets) simultaneous with its debut on Netflix. A number of smaller independent theaters are sure to follow; the major chains (many of which, in fairness, would probably not go all-out for a difficult drama like this in the first place) are likely to hold their ground, though one or two have shown flexibility.

The deals are something of a coup for the movie, which instead of having to ride it out in streaming solitude is now part of the specialty mainstream — and can partake in the traditional review spaces and physical-world exposure that comes with it. It’s a hybrid model that seeks to capitalize on what each platform has to offer.

At the same time, the strategy points up how much the idea of a Netflix-theatrical marriage remains an uncertain proposition down the road.

If Netflix viewership is truly high, a few art-house theaters don’t add much to the bottom line, and it will likely just be a matter of time before they fall away as a key part of the release strategy. Netflix can make the case to filmmakers that those theaters are not really needed to gain viewership for their film. The company will also be able to make the case to media that Netflix movies should be reviewed as big-screen features even if they’re available only on the small screen and mount the argument to Oscar voters that the theater-only rule is out of date.

If viewership is not that high — and only Netflix knows — filmmakers won’t be happy with the release in just a few dozen theaters. Sure, it’s fine (maybe) for a challenging drama like “Beasts,” but not for many movies, and not in the long term. And so they’ll push back against Netflix and its simultaneous release strategy. (Some are likely to do this even if viewership is high.)

What shape theatrical movie-viewing will take in the coming years remains one of the industry’s big questions. It’s certainly possible the business is heading for a kind of bifurcation, in which traditional windows remain in place, more or less, for spectacle-driven studio movies that need, and get a big chunk of money from, the biggest chains, while a parallel hybrid streaming-theatrical system a la “Beasts” develops for the nontentpoles with the help of a consortium of independent theaters. (This of course has already begun to happen with day-and-date releases for niche movies.)

But in the long term it seems inevitable that matters will come to a head. If Netflix is serious about upending the windows system — while theater chains, perceiving an existential threat and worried these Netflix experiments are a gateway to their own obsolescence, are determined not to allow it — something will have to give. A staring contest can go on only so long without someone starting to lose. (It’s also an open question how much longer the company can or will keep paying top dollar when its return comes not in the form of direct revenue but the squishier metric of subscriber acquisition, but that’s another matter.)

Ted Sarandos, the architect of this Netflix strategy, says consumers simply want choice on movies: Some want theaters, and some want laptops. There’s enough revenue to go around. Yet it’s hard to conceive of a world where one platform doesn’t start to gain an edge and where both can sustain themselves splitting the pie. There may be coexistence — on some movies even for a substantial period. But long-term for many movies, theatrical is either a factor or it isn’t, and Netflix either needs it or it doesn’t. “Beasts” is a movie looking to balance both. How many more can do so remains to be seen.